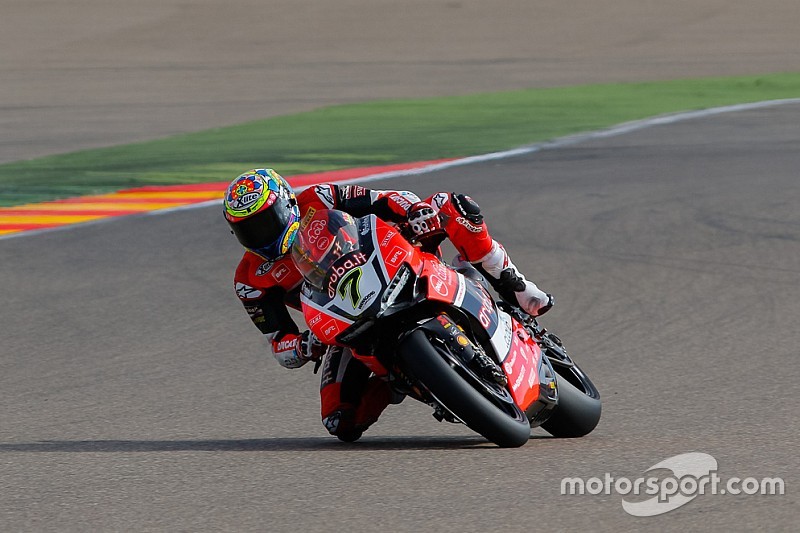 Chaz Davies took another dominant win in the second World Superbike race at Aragon, completing a convincing double victory aboard the Ducati.

Starting from fourth on the grid, Davies immediately jumped to third at the start behind the Kawasakis of Tom Sykes and Jonathan Rea, demoting the latter mere corners later to grab second.

It didn't take long for Davies to arrive on the rear wheel of Sykes, the two enjoying a brief battle on the second lap before the Welshman swept past at the final corner to take the lead.

From there, Davies was unstoppable, building a two-second cushion over Sykes in the space of six laps and ultimately going on to take his second win in succession by six seconds.

Attention then turned to the all-Kawasaki battle for second place, as Rea followed closely in Sykes' wheeltracks before blasting ahead along the back straight at the halfway mark.

Rea's time in second proved short-lived, however, as he ran wide with four laps to go at the first corner, allowing Sykes back into the runner-up spot; the reigning champion was forced to settle for the bottom step on the podium.

Behind the top three, Barni Ducati rider Xavi Fores stealthily rose up the order from his grid slot of ninth to take another impressive fourth place.

Honda's Michael van der Mark was demoted from fifth in the closing stages to seventh, first slipping behind Jordi Torres (Althea BMW) and then Davide Giugliano, who had been running fourth early on aboard the second works Ducati before slipping back with a missed gear change.

Completing the top 10 were Alex de Angelis (Ioda Aprilia) and the works Yamaha duo of Alex Lowes and Sylvain Guintoli, who immediately went backwards from their front-row grid slots.

Lowes in particular had an eventful race, dropping well down the order early on with an off-road excursion before steadily recovering to ninth, pipping teammate Guintoli on the run to the finish line.

Nicky Hayden was another rider to drop back in the first part of the race, the former MotoGP champion eventually coming into the pits with a suspected mechanical problem.

Davies' second win of the WSBK campaign puts him second in the riders' standings, 26 points adrift of Rea and three clear of Sykes.

Ducati team does the double in Aragon with Chaz Davies, Davide Giugliano sixth in Race Two