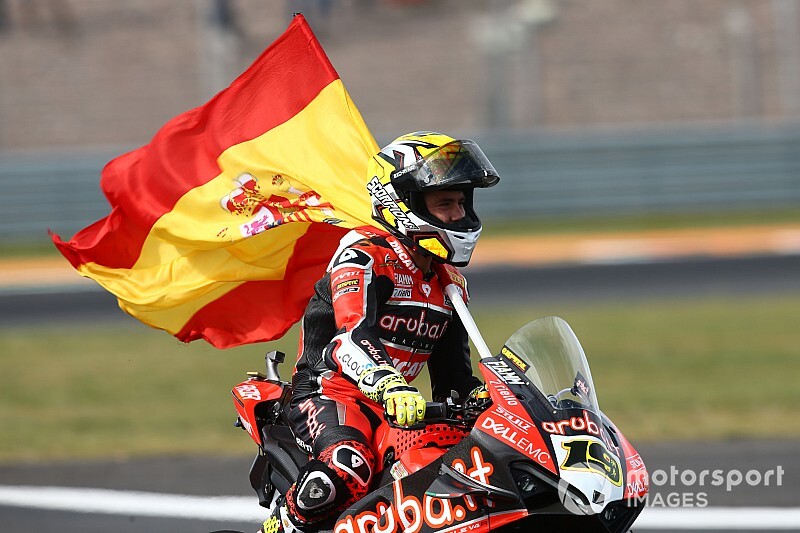 Riders had complained about poor track conditions during Friday practice - and while an attempt was made to clean up the track for Saturday, qualifying was still tricky with very few able to improve on qualifying tyres.

In addition to that, Loris Baz suffered a big crash and was declared unfit for Race 1 due to a left-hand contusion.

Subsequently, six riders decided not to take part in the first race of the weekend, most notably Ducati's Chaz Davies and GRT Yamaha's Sandro Cortese pulling out from seventh and ninth from the grid.

Other riders to skip the race were Cortese's teammate Marco Melandri, Leon Camier, Ryuichi Kiyonari and Eugene Laverty, leaving 12 racers on the grid.

The two biggest names, pole-sitter Alvaro Bautista and reigning champion Jonathan Rea, decided to race and the latter took the lead off the line.

He traded the lead with Yamaha's Michael van der Mark a couple of times but Bautista was back ahead by Turn 10.

He led a four-man group including the Kawasakis of Rea, Razgatlioglu and van der Mark early on but the latter two started to gradually fall behind.

Rea, however, kept putting pressure on Bautista with only the Ducati's straightline-speed advantage keeping the Spaniard ahead.

Ultimately Rea could also only keep up with Bautista until lap 10 when he suddenly lost over a second, before a mistake at Turn 6 cost him even more time soon afterwards.

Bautista cruised to the finish without any issues in the second half of the race to win by 1.5s.

After his mistake, Rea came under pressure from Razgatlioglu but the latter couldn't pull off a move on his fellow Kawasaki rider, settling for third and sealing the title of Best Independent Rider of the season.

Van der Mark was a distant fourth, 13.6s behind Razgatlioglu, while his teammate Alex Lowes took fifth with another huge gap, holding off Kawasaki's Leon Haslam.

The only rider to retire from the race was Michael Ruben Rinaldi, who pulled into the pits.