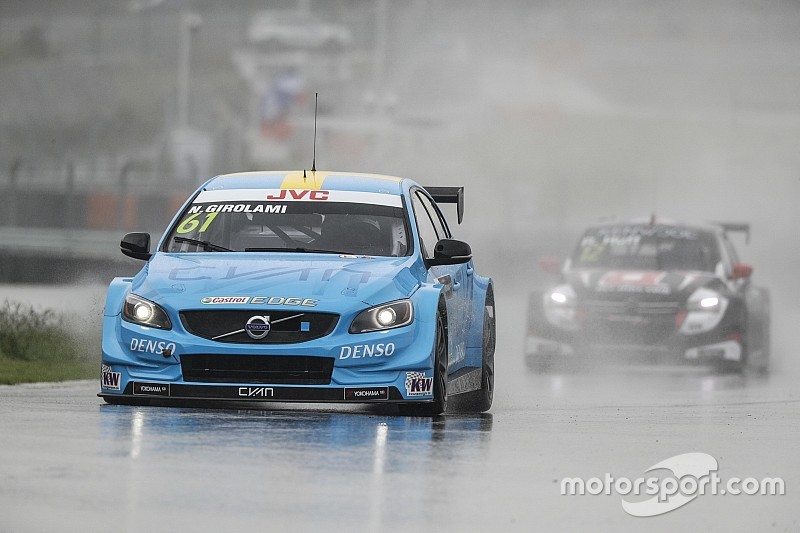 Volvo driver Nestor Girolami claimed his maiden WTCC pole position in qualifying for the inaugural round at China's Ningbo circuit.

In wet conditions, Girolami was the fourth driver to attempt a shootout lap in the final part of qualifying and set the fastest time of all through the first and second sectors to claim pole with a best effort of 1m58.049s in his Volvo S60 Polestar.

Girolami's closest challenger in the end was title hopeful Norbert Michelisz in his factory Honda Civic, three tenths of a second back.

Michelisz, who had gone off strategy with a late, single-lap effort to advance to Q3, had been down on the previous best benchmark on his shootout run but found time in the final sector to displace the second Volvo of fellow title challenger Thed Bjork.

Despite ending the session third, the three points Bjork gained for that qualifying position move him to within nine points of absent championship leader Tiago Monteiro in the drivers' standings.

Rob Huff will start Sunday's main race from fourth on the grid in his Munnich Motorsport Citroen.

Gabriele Tarquini, who is standing in for Monteiro in China, had been fastest in the second part of qualifying but produced a scruffy shootout lap and ended up fifth.

Once Michelisz had set his late best effort in Q2, a sizeable gulf separated the top five and those who played no further part in the action.

Tom Chilton was the closest to making the final part of qualifying but still ended up more than three quarters of a second away from the cut-off, while Esteban Guerrieri was seventh in his Campos Racing Chevrolet Cruze.

Nicky Catsburg complained of oversteer throughout qualifying and could only manage eighth in the third Volvo, ahead of the second Sebastien Loeb Racing Citroen of John Filippi and Yann Ehrlacher's RC Motorsport Lada - which will start the reversed-grid race from pole.

Kevin Gleason produced easily his best display in a WTCC qualifying session in advancing to the second part of qualifying but took no part in the second segment and will start both races from 12th, behind the the third Honda of Ryo Michigami.

Mehdi Bennani was the surprise dropout in the first part of qualifying in his SLR Citroen.

The Moroccan, who sits fourth in the points, struggled throughout Q1 and blamed a poor choice of set-up for his troubles.

Though Bennani and the ROAL Motorsport Chevrolet of Tom Coronel were both on track in the closing moments of the session, neither could displace Filippi or Michigami and will instead line up 13th and 14th respectively.