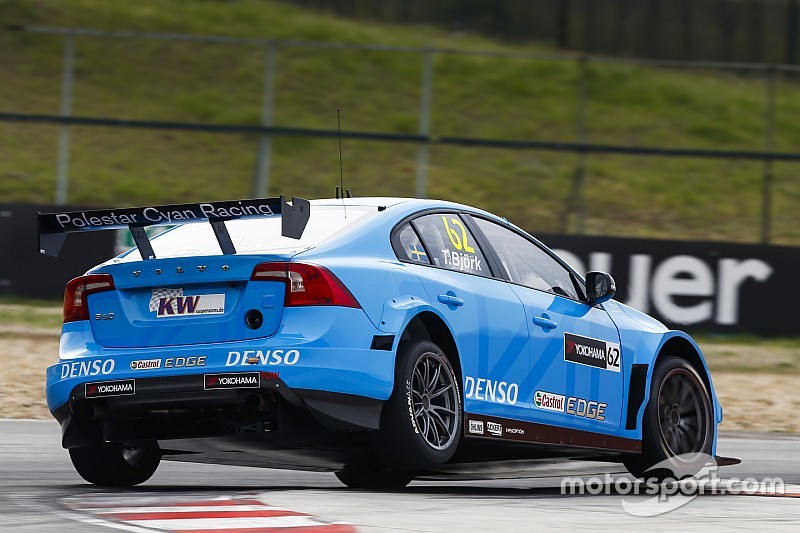 Polestar Cyan Racing’s Thed Bjork was fastest of all in the final practice session at the Hungaroring, leading Lada’s Gabriele Tarquini and Volvo teammate Fredrik Ekblom.

The Volvos were strong throughout the session with the two blue S60s at the top end of the results table during most of the 30-minute session.

The Volvo's only briefly fell behind first Citroen’s Jose Maria Lopez then Honda’s Norbert Michelisz, before Bjork produced a new lap record of 1m47.525s, just after half way through the session which was never bettered.

After a number of warnings and lap deletions in FP1, the drivers were more behaved in FP2 with just three drivers losing lap times and no stewards warnings.

The Swede lost his best time from his first run, while Lada’s Nicky Catsburg and Munnich Chevrolet team owner/driver Rene Munnich both also had one of their times deleted.

“The track feels really good...and is changing all the time,” said Bjork. “We’re OK in free practice but it’s in qualifying we’ll see the true result (but) we’re getting closer.”

Tarquini left it to the final moments to appear as the closest threat to Bjork, despite carrying 50kg of compensation weight on his Lada Vesta, producing a time just 0.074 seconds slower than the reigning STCC champion.

The best-placed Citroen was also the fastest privateer, with Tom Chilton fourth in his C-Elysee WTCC, just over two-tenths of a second behind Bjork, with the fastest Honda that of Michelisz in fifth.

Tom Coronel was again fast in his ROAL Motorsport-run Chevrolet Cruze, producing the sixth best time by the end of the session, just ahead of Citroen’s Lopez

The Argentine produced the best second sector of all before aborting his lap and heading to the pits at the end of the session, perhaps disguising the true pace of the two-time manufacturers’ champions ahead of qualifying.