The team will be saying goodbye to both the series in which it has had a tremendous amount of success as well as its Honda Performance Development P1 car.

INDIANAPOLIS - Muscle Milk Pickett Racing will be taking its Muscle Milk HPD ARX-03c out for one final American Le Mans Series round next week when the sports car series heads to Road Atlanta for the season-ending Petit Le Mans.

The team will be saying goodbye to both the series in which it has had a tremendous amount of success as well as its Honda Performance Development P1 car with which it has earned 18 podium finishes, including 14 wins, and 11 pole positions in 19 starts. 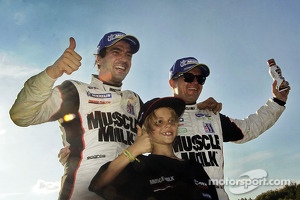 Since its debut in the American Le Mans Series in 2007, the team led by Greg Pickett has taken part in 45 races, finished on the podium in 39 of those events, won 21 of them and has taken home the Team and Driver Championships in 2012 and again this season.

Looking further into those statistics, the team's drivers, Klaus Graf and Lucas Luhr set a record in 2012 by scoring five consecutive overall victories. A record they broke this season by claiming the overall win in eight races in a row so far this year.

The pair of Germans and its Muscle Milk team will be looking to increase that number next week as it takes on the challenges of the 1000-mile or 10-hour Petit Le Mans race around the 2.54-mile, 12-turn road course at Road Atlanta. Luhr will also be vying for a 50th career ALMS win.

Porsche factory driver Romain Dumas will join Graf and Luhr behind the wheel of the Muscle Milk car for the final round. The Frenchman last raced with the team at the 12 Hours of Sebring and was also part of the lineup at Petit Le Mans last season.

While the team will be chasing a ninth victory this year, it won't be an easy feat with Rebellion Racing returning to the ALMS for Petit Le Mans. The Pickett Racing team last faced off with the European sports car squad last May at Laguna Seca and came out victorious of what was one their hardest battles this year.

The team will take to the track starting Sunday, October 13 for the promoter test day. Official practice gets underway on Thursday, October 17 with qualifying taking place on Friday, October 18.

Klaus Graf - driver #6 Muscle Milk HPD ARX-03c: "Petit Le Mans is one of the few races on the ALMS schedule we haven't won yet and it's definitely on our list, it would make the season complete. We really want to win it. It would give Lucas 50 wins in the ALMS and us nine wins in a row, which would be nice. We'll try! It's a big race and we will have more competition with Rebellion coming back so it won't be easy.

"I love the Road Atlanta track. I lived in Atlanta and I've done a lot of laps there. I really enjoy it, it's my favorite track in the United States, so I look forward to going there again.

"With this being the last ALMS race, it's also a little bit sad. I had just joined Panoz when the ALMS took off quite some time ago. I wasn't always in the series but it's been a big part of my career over the years. "An era comes to an end but I think the future is also pretty bright and we're looking forward to next year too."

Lucas Luhr - driver #6 Muscle Milk HPD ARX-03c: "I'm looking forward to this last race of the season but it will be bittersweet with it being the final American Le Mans Series race and our last event with this fantastic Muscle Milk HPD P1 car. Klaus and I are enjoying every moment we can in it and hopefully we can get one more win out of it before we have to part with it.

"We've certainly had a great season no matter what happens in this next race but we really want to keep our streak alive at Road Atlanta and make it nine in a row. We didn't have the race we wanted to last year and hopefully we can make up for it this time around.

"The track is one of my favorites in the United States. It's a great circuit and fun to drive but it certainly won't be an easy race. We will be facing some tough competition with Rebellion Racing coming back for this last one. We had a great fight the last time we raced them at Laguna Seca and I can't wait to go up against them one more time."

Romain Dumas - driver #6 Muscle Milk HPD ARX-03c: "It's great to be able to participate in the final American Le Mans Series race with a team like Muscle Milk Pickett Racing, with the possibility of fighting for the overall win. With the debut of the TUDOR United SportsCar Championship next season, it marks the end of a magnificent chapter, personally, one of the best for me. I have so many good memories from competing in the American Le Mans Series first in the GT ranks and then in the prototype class with the Porsche RS Spyder. It would be incredible to add a final sentence to my story in this series.

"I haven't driven the Muscle Milk car in the HPD ARX-03c configuration yet but I remember that the 03a performed very well at Petit Le Mans last year. The Pickett Racing team has had a wonderful 2013 season, already clinching the Championship, and I know everyone will want to end it with a win and a solid performance. However, we will be facing some tough competition in Rebellion Racing, but I know the team has what it takes to get an excellent result."