Honda Racing India rider Rajiv Sethu scored yet another points finish in the Thailand round of Asia Road Racing Championship on Sunday.

After qualifying a career-best seventh in the Asia Production 250cc category, Sethu ran in the leading group of riders for the first time, on course for his best ever race finish.

However, on lap 6, Indonesian rider Rafid Topan Sucipto suffered a high-side while running ahead of him, forcing Sethu to take evasive action - which dropped him down to 10th.

From there on, he tried to return to rhythm but lost places to Muzakkir Mohamed and Sucipto, eventually finishing 12th.

Despite not being able to secure a top 10 finish, a result he was personally targeting, 12th place represented a healthy bag of four points, allowing him to extend his season tally to 22 points.

“Today, I raced my best out of my 24 ARRC races in 3 years,” Sethu said. “For the first time, I fought in top 5 in 2 laps and I had my maiden opportunity to taste the front bunch of AP250.

“Overall, I learnt a lot in Thai round and will be using this experience going forward. Last year, after my wrist fracture I couldn’t race well in Japan.

“This year I will surely benefit from my experience in Suzuka 4-Hour Endurance race next weekend and will apply the learning in upcoming June end round in Suzuka.” 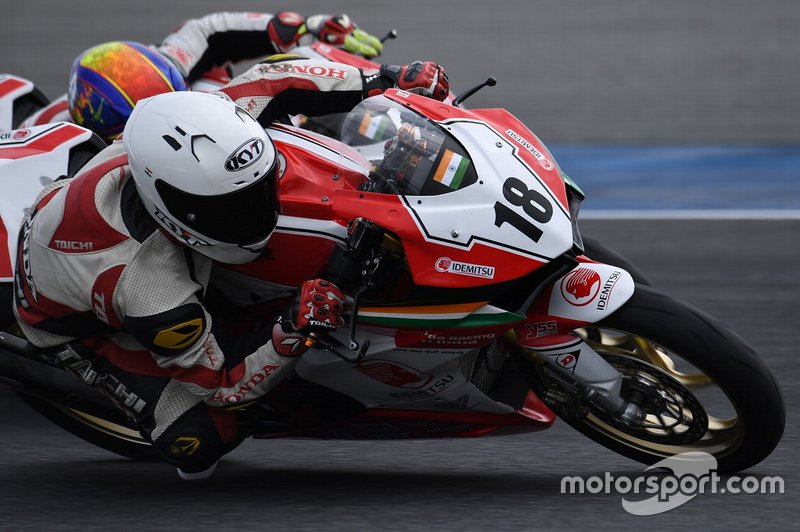 Meanwhile, ARRC rookie Senthil Kumar was unable to finish inside the points astride the sister Honda CBR 250, crossing the line in 20th position.

“Race 2 started on a good note for me,” he explained. “By turn 3 of lap 1, I had overtaken 6 riders but exceeded track limit while cornering.

“I had returned to starting 20th position by lap 4 but Malaysian rider Shahrol had an impact with me on Turn 3.

“While Shahrol crashed out, I went in the mud to save myself but couldn’t join the front bunch due to increased gap. ”

The next round of the Asia Road Racing Championship will take place at Suzuka in Japan from June 28-30. However, prior to that, the Honda India will team get more track time at the legendary circuit by participating in next weekend's Suzuka 4-Hour Endurance race.

Mr Prabhu Nagaraj, who presides Honda India's motorsport programme, said:“After today, I can confidently say that our team has entered the next level of racing.

"Rajiv raced in the top bunch for the first time. Learning race-craft from Asia’s best riders gives him new insights to accelerate his performance exponentially moving ahead.

"For Senthil, the learning phase will continue on how to ride with Asia’s best by adapting fast to the new machine and new tracks.

"While the round ends today, preparation for next challenge starts tomorrow when the team flies to Japan for Suzuka 4-Hour Endurance race for first time.

"This will further add to their track and riding style before Round 4 in June end at Suzuka circuit itself.”