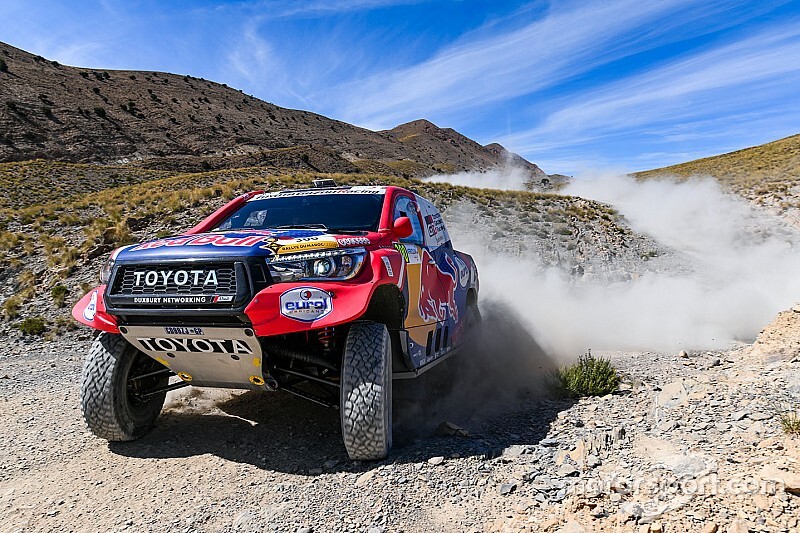 Nasser Al-Attiyah continues to lead the Morocco Rally after Stage 2, while Toyota stablemate Fernando Alonso recovered from Saturday’s punctures to propel himself inside the top 10.

The second stage featured a lengthy 385km timed section which traversed through the dunes of Erg Chebbi and Ouzina.

Starting out front, Al-Attiyah built a 1m03s lead over X-Raid MINI’s Stephane Peterhansel in the first 48km, before extending his advantage to nearly six minutes through the next three stretches of dunes.

The Qatari driver eventually ended up 11m clear of his nearest rival in Stage 2, and heads to Monday with an overall advantage of 17m09s.

Jakub Pryzgonski finished the stage second quickest after overtaking MINI teammate Peterhansel, but neither could depose Toyota’s Giniel de Villiers from second in the overall timesheets.

De Villiers finished a distant fourth in stage 2, but managed to retain second in the combined classifications by just 35s from Peterhansel.

Sainz showed impressive pace through the third reference, finishing less than three minutes down on Al-Attiyah, but lost his way several times in the final sector and also suffered a flat tyre before the neutralised zone.

That meant he was classified 30 minutes down on Al-Attiyah after stage 2, with Pryzgonski another 38 minutes adrift in eighth.

After two punctures and a broken wheel rim that left him down in 21st in the order, Alonso enjoyed a relatively trouble-free run as he jumped up to 10th at the end of stage 2.

Toyota’s newest recruit sits just over three minutes down on ninth-placed Aron Domzala, with Przygonski only five minutes ahead in eighth.

Meanwhile, the bikes category was run to marathon stage rules, with Honda’s Joan Barreda setting the quickest time to take the overall lead.

Barreda leads the Husqvarna of Andrew Short by 6m25s in the general classifications, with Luciano Benavides third in the lead KTM.

Alonso crashes out of third stage of Morocco Rally