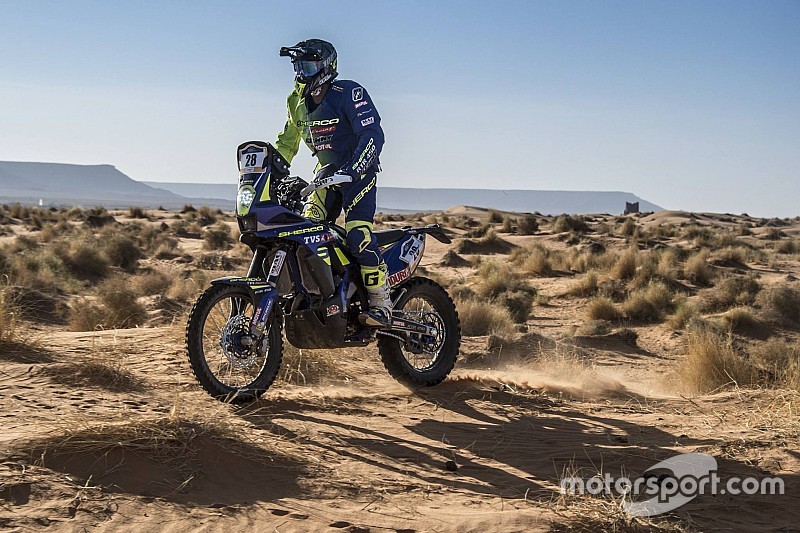 Sherco TVS’ Aravind KP was the star Indian performer in the fourth stage of Merzouga Rally, but compatriot and Hero rival CS Santosh remains the top rider from the subcontinent.

Wednesday’s marathon stage marked the biggest test so far for the competitors, who had to complete 274 km in least possible time while keeping their bikes in prime conditions due to restrictions on outside assistance.

KP, who was hit by a post-stage 31 minute yesterday, set the 16th quickest time in the marathon stage to regain 25th place in the overall standings.

He completed the said distance in 3hr58m05s, 41 minutes down on Yamaha’s Franco Caimi, who brought Xavier de Soultrait’s winning streak to a halt. The latter, however, continues to hold the top spot in the overall timesheets.

Santosh, meanwhile, was 20th fastest in today’s gruelling stage with a time of 4hr06m01s. He remains in 15th position in the standings, with two stages still to go.

Sherco TVS’ Abdul Wahid struggled in the first marathon stage, dropping to 28th place in the overall classification after managing only 39th fastest time of the day.

However, given that Wahid has never experienced anything like today’s marathon stage on Indian soil, it was a commendable effort from him on his international debut.

Adrien Metge, likewise, made major leapways after a troubled start to the rally, setting the sixth fastest time of the day to move to 52nd position in the overall table.