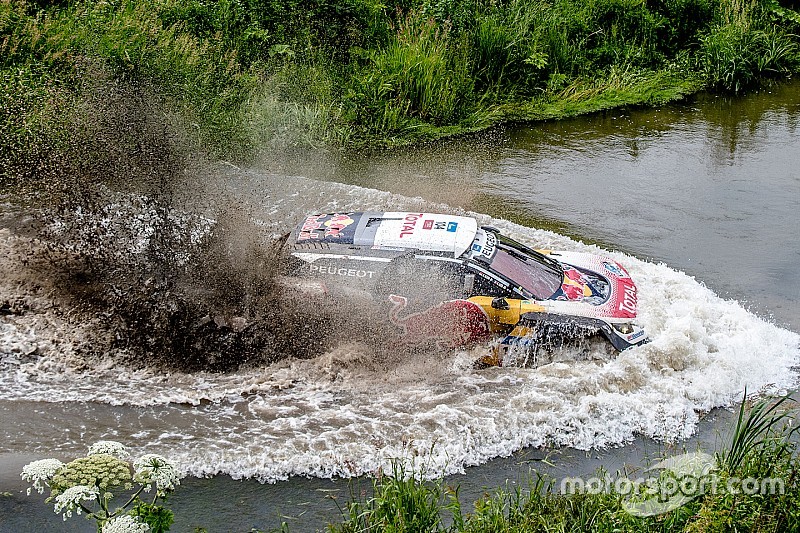 Sébastien Loeb (Peugeot 3008DKR Maxi n°104) in the cars and Martin Kolomy (Tatra Phoenix n°311) in the trucks dominated this 4th stage of the 2017 Silk Way Rally between Kostanay and Astana, the capital of Kazakhstan. The rally’s longest day (908 km) saw a number of upsets out on the piste, including Stéphane Peterhansel and Jean-Paul Cottret running out of road and in the process losing all chance of final victory for the second time in a row…

Particularly superstitious, Stéphane Peterhansel must be starting to think that Kazakhstan is his ‘unlucky’ country. One year to the day after his 2016 edition crash, the Peugeot driver once again rolled his car, just 43 kms into the first special, as he was chasing after piste opener and team mate Sébastien Loeb, aboard his 3008DKR Maxi. Fortunately neither Peterhansel nor his co-driver were hurt in the accident but they were unable to restart without the intervention of their assistance truck, an operation that cost them more than 2h30 overall.

A ranking that Loeb, once again untouchable today, now completely dominates, leading the second placed car of Cyril Despres by 1h07m55s. A gap in part explained by the third member of the Peugeot Sport team once again slipping off the track and finishing the special over 50 minutes down.

Another front runner to run out of road was the American Bryce Menzies (Mini John Cooper Works n°105) who had to be pulled out by a friendly Kamaz before finishing more than 41 minutes behind the 9 times King of WRC.

T2 Category: Di Lallo back in the lead

“Today's specials were treacherous and true rally raid stages in every sense of the word - the conditions were tough. I couldn't be happier with the way the car and my co-driver Harry Suzuki, performed today.”

All smiles at the finish, Adrian Di Lallo was clearly delighted with his third T2 stage victory. The Australian is now almost 11 minutes ahead of the Japanese driver Akira Miura (Toyota Land Cruiser n°133).

The longest stage of the rally also saw some major upsets in the truck class, while up at the front of the race Gerard De Rooy (Iveco Powertsar n°302) and Martin Kolomy (Tatra Phoenix n°311) fought it out tooth and nail.

In the beginning it looked like it was the Dutchman who was going to come out on top, but in the end it was the Czech who took both specials to finish just 21 seconds ahead. Overall Kolomy increases his lead on De Rooy to more than 11 minutes. On home ground, the Kazakh Artur Ardavicius (Iveco Powerstar n°310) took third place, both on the stage and overall.

Without stopping to help out Despres and his Peugeot and Menzies’ Mini, the Kamaz of Dmitry Sotnikov (Kamaz-Master n°303) and Anton Shibalov (Kamaz-Master n°312) would have no doubt finished higher up the rankings - almost as if the Blue Armada were in no hurry to move into attack mode…

Among those running into problems on the special were van den Brink (Renault ‘Sherpa’ n°301), whose truck briefly caught fire, yesterday’s winner Siarhei Viazovich (MAZ n°304), who put his truck on its side at km 378 and Pascal De Baar (Renault n° 308), victim of more mechanical woes. All three slide down the rankings as a result…