Walkner: "Luck was on my side" in Dakar triumph 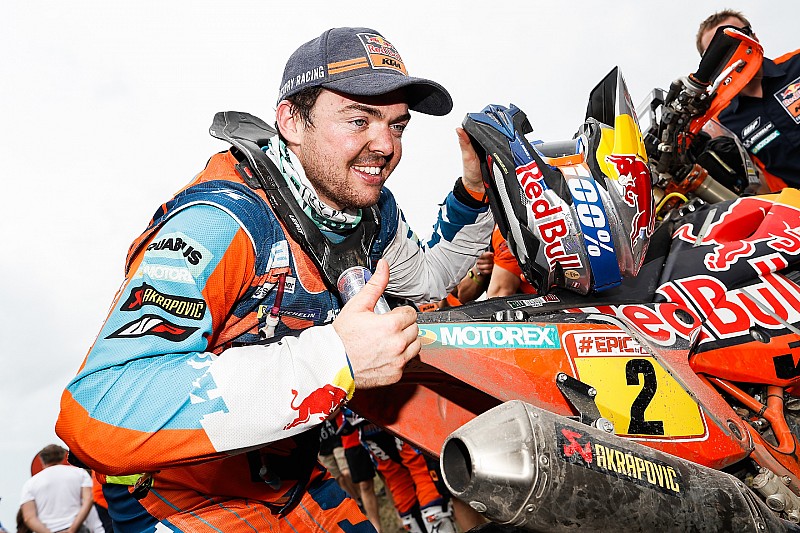 Newly-crowned Dakar bikes champion Matthias Walkner says he owes his victory in the 2018 event largely to having luck on his side.

Walkner won just one stage on his way to overall honours, Stage 10, but opened up a 39-minute lead that day as several contenders for the win got lost on the Salta-Belen test.

The 31-year-old however said he felt that he simply got lucky after nursing his advantage through the remaining stages of the rally.

“It’s really amazing,” said Walkner after sealing his triumph. “I never was thinking I could really win, the goal was to be on the podium.

“But it was so close this year and the 10th day was really the key day, maybe the luck was this time on my side. But it’s a really a dream come true.

“It was a really crazy Dakar, the rider level is so high, [there were] five other people who could stay here but it looks I like I was the lucky one.

Walkner’s path to Dakar glory was also smoothed by several major contenders for victory falling by the wayside.

Defending champion Sam Sunderland was the first big name to exit, the works KTM rider injuring his back during the first week and being forced to withdraw.

Yamaha’s Adrien van Beveren broke his collarbone and retired after a crash on the pivotal Salta-Belen stage that Walkner won, while Honda’s Joan Barreda had to pull out the next day after hurting his knee in a previous fall.

As well as Honda’s best-placed rider Benavides, Walkner also had to overcome factory KTM teammates Toby Price and Antoine Meo to clinch the title in the closing stages.

“I was quite nervous, especially yesterday [Friday] was a really long day and I knew the guys behind me would push like hell,” added the Austrian.

“I knew I was one of the seven or eight guys who could win, but to take a top three was more or less the goal – because to win you need luck, the bike has to stay safe, you have to make no mistakes.

“In the end everything worked nicely together. It’s such an amazing feeling, with KTM, Red Bull and [being an] Austrian rider. Now I take good time to realise what happened.”