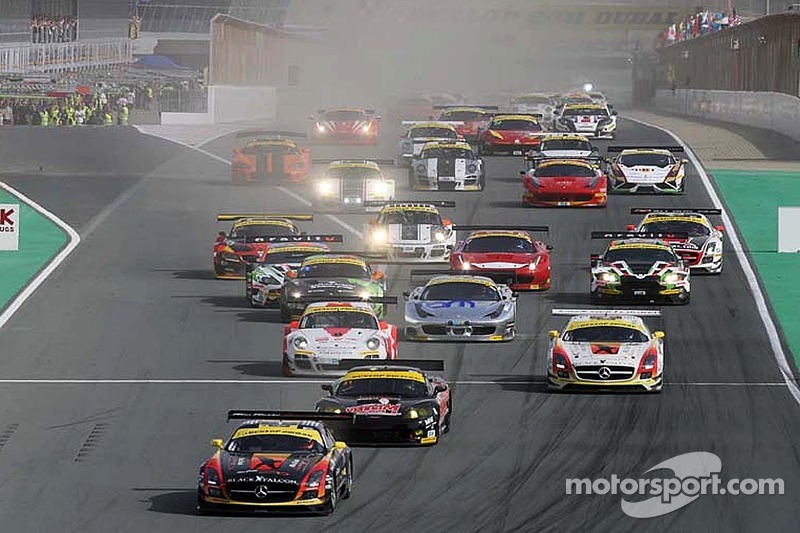 At the front it's Mercedes versus Porsche versus Corvette versus Ferrari.

His Highness Sheikh Juma Bin Maktoum Al Maktoum waved the UAE flag at 2:00 pm on Friday at Dubai Autodrome to flag off the 80 car field competing in the Dunlop 24 Hours of Dubai, shortly after the entire grid stood for a minute of silence for race winner Sean Edwards, Allan Simonsen, ‘Wolf Silvester’, former class winner Stéphane Wintenberger and engineer Michael ‘Custhy’ Tallantire - all who passed away last year.

The ninth edition of the event, which takes place on 10 and 11 January at Dubai Autodrome, is held under the patronage of His Highness Sheikh Hamdan bin Mohammed bin Rashid Al Maktoum Crown Prince of Dubai and Chairman of the Dubai Sports Council.

The first hours have been a frenetic affair as the big field, featuring some of the world's best endurance drivers, jostled for position in blustery conditions. From the front row it was the V8 Racing Corvette with Nicky Pastorelli and the Team Abu Dhabi by Black Falcon Mercedes, with Jeroen Bleekemolen in the cockpit, who set the pace - the duo running nose to tail for the first hour, and swapping positions on a number of occasions during the first hour.

Current leaders, the No. 38 All-Inkl Münnich Motorsport Mercedes of René Münnich, Marc Basseng and Rob Huff run ahead of the No.4 Fach Auto Tech Porsche of Otto Klohs, Martin Ragginger, Sebastian Asch and Connor de Phillippi, with the top two separated by only seconds after their third round of pitstops.

The Team Abu Dhabi car including Emirati ace Khaled Al Qubaisi, multiple DTM champion Bernd Schneider and Andreas Simonsen are targeting a hat-trick at the Dubai race, and the early stages seem to indicate that they are in with a chance of accomplishing the feat, along with a several other top teams including Fach Auto Tech 2 Porsche who led on the hour mark, the Stadler Motorsport Porsche and the MRS GT-Racing Porsche.

The early indications are that the race will be a hard fought contest between BMW, Mercedes, Porsche and Ferrari with the Corvette looming large.

The UAE based teams, all intent on podium finishes in their home race, were all running well in first few hours. Both Dragon Racing Ferraris were featuring strongly in the A6 Pro-Am Class, with the pair in the top six.

The Memac Ogilvy Duel Racing Seat set the early pace by leading in the A3T Class, while the Lap57 Honda led proceedings in the A2 Class, with the SVDP Racing BMW battling it out in the top three in the D1 Class.

Dubai Autodrome Chairman Ali Al Fardan said, "This race has grown from strength to strength over the years and this year it is the best I have witnessed, with great drivers, very professional teams, local interest in the UAE competitors and most of all the atmosphere has been superb thanks to the combined efforts of the Dubai Shopping Festival, Dubai Sports Council and the Dubai Department of Tourism & Commerce Marketing."