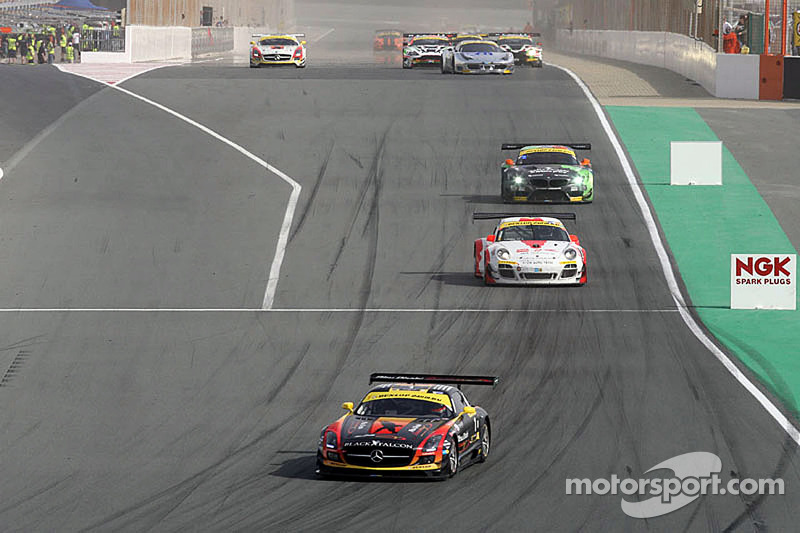 Dubai, UAE - The UAE’s Khaled Al Qubaisi produced a tenacious drive to keep Team Abu Dhabi by Black Falcon on course for a third successive victory in the Dunlop 24 Hours of Dubai today. 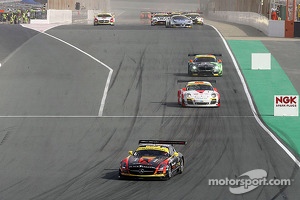 With a frenetic first 63 laps of Dubai Autodrome completed, Al Qubaisi held the lead in the team’s Mercedes AMG SLS GT3 from Gianmaria Bruni in the Ferrari 458 Italia of the Swiss-based Spirit of Race 1 team.

With a powerful international line-up of 77 cars roaring away from the start, the ninth edition of the spectacular endurance race was always likely to supply some dramatic action, and the first two hours did not disappoint.

Starting second on the grid behind pole position winner Nicky Pastorelli in the Chevrolet Corvette C6-R of Dutch-based V8 Racing, Jeroen Bleekemolen produced the perfect start as he powered the Abu Dhabi Racing-sponsored Mercedes into an immediate lead.

That lead changed hands several times over the next hour before Bleekemolen handed over to Al Qubaisi who emerged from the pits to find himself under immediate pressure from a cluster of challengers, and Bruni ahead of him.

The UAE driver’s response was impressive as he quickly recaptured the lead, losing it briefly to Bruni before finding a way past the Italian again to keep Abu Dhabi Racing on track for another big victory following last month’s brilliant win in the Gulf 12 Hours at Yas Marina Circuit.

“It’s a long race and you need to make sure you manage the pit stops and do the driver changes quickly because that’s where you can gain or lose time,” said Al Qubaisi just before the start. “We’re here to win, we’re the clear favourites and we have to stay out of trouble and avoid having too much bad luck.”

Al Qubaisi hopes his performances can inspire the next generation of young Emirati drivers, and in particular the first batch of five enrolled in the Daman Speed Academy which he initiated for Abu Dhabi Racing last year in partnership with the National Health Insurance Company.

The five, including his 13 year-old daughter Amna who was at the race today, are following an eight-month training programme based at Yas Marina Circuit and will contest next weekend’s two rounds of the UAE Rotax Max Challenge, the national karting championship, in Dubai.

“When they see someone like me winning it can inspire them because they then know it can be done,” said Al Qubaisi. “I’m here to show them the way. All I need from them is commitment.”