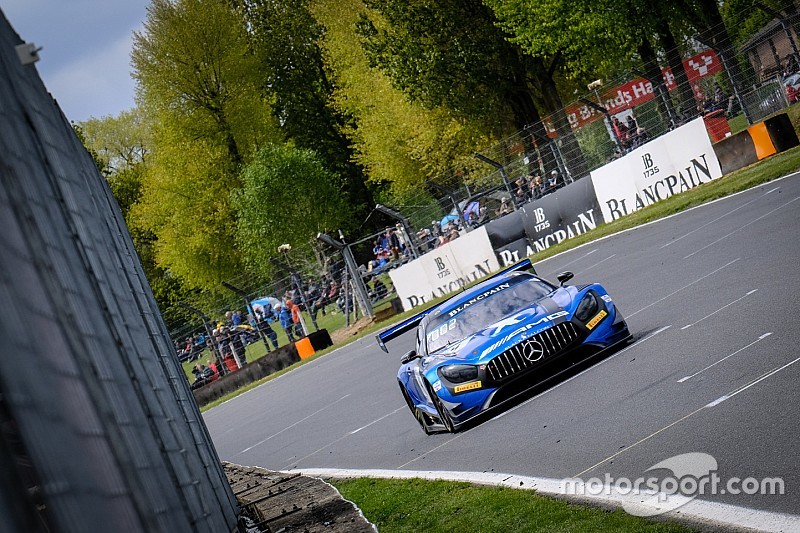 Reigning Endurance Cup champions Engel and Stolz therefore went one better than the opening race of the day, where they had to give best to Silver Cup competitors Nico Bastian and Thomas Neubauer in an AKKA ASP Mercedes.

In race two, Schiller in AKKA ASP’s #90 Mercedes, also from the Silver Cup, lead early on and quickly built a lead of 3.5 seconds after the opening stint was interrupted by a lengthy safety car period. Just after half-distance however, he had a drive-through penalty issued for speeding under the safety car, as he proceeded at 94.1kph rather than the permitted 80kph.

After pitting relatively late the Mercedes, now in Timur Bogulavskiy’s hands, dropped to eighth place. It was later announced that the penalty was being suspended until after the race, as Schiller argued that the speeding was done when catching up with the safety car, which was some way ahead amid some confusion.

In the meantime, Stolz was left with a clear lead. His co-driver Maro Engel had run in third in the opening stint behind leader Schiller and Nick Foster in the #55 Attempto Racing Audi in second, and the Black Falcon Mercedes vaulted to the front in the pitstop round. Stolz then build a commanding lead over second-placed Vincent Abril in the #88 AKKA ASP Mercedes shared with Raffaele Marciello.

Abril then rolled to a halt with 15 minutes left, having gradually lost drive, which let Andrea Caldarelli’s Orange 1 FFF Huracan he shares with Marco Mapelli through to finish second, 11.6s shy of Stolz.

Foster and Steijn Schothorst, whose Audi R8 had crashed out at the first turn of race one, finished third. The car still had gravel in it going to the race two grid as the team didn’t have time to remove the floor between races.

Race one overall winner Bastian lost fourth place with a late drive-through penalty for overtaking under the full-course-yellow. However, the car still got the Silver Cup victory as Bogulavskiy, who was set to re-take the Silver Cup lead, stopped his smoky Mercedes before the pit entrance.

The safety car in the opening stint was caused by a multi-car crash at the exit of Hawthorn nine minutes into the hour-long race. It occurred when David Perel in the Rinaldi Racing Ferrari 488 nudged Phoenix Racing’s Frederic Vervisch in the #11 R8 into a spin, and several cars were caught up in the resultant melee.

Andrea Bertolini’s #52 AF Corse Ferrari 488 was out on the spot while WRT Audi pair Rik Breukers and Dries Vanthoor, #10 and #1 respectively, continued only as far as the end of the lap. Vervisch continued, as did Sainteloc Racing’s Christopher Haase in the #25 R8 after repairs to his right-hand door. Perel got a drive-through penalty for causing the collision, costing him the Pro-Am lead.

Christian Engelhart’s Grasser Racing #63 Lamborghini Huracan was apparently carrying some of Bertolini’s errant bodywork, and shortly afterwards got a drive-through for colliding with Keen just before the safety car period.

Sometime Formula 1 driver Markus Winkelhock, joined by Steven Palette in the Sainteloc’s #26 Audi, was nudged out into the Paddock gravel on lap one. McLaren Autosport BRDC Award winner Tom Gamble in the #17 WRT Silver Cup Audi, partnering with Shae Davies, retired in the pits at end of that lap with rear damage.