For this new Top 10 list, let's do something different and mix music with racing. Just for fun.

Once again, last month 24 Hours of the Nürburgring brought some great race action and also some amazing photography opportunities. However, there is one thing that has always struck me with this event is how much it is not only about the "visual" but also about the "sound". Indeed, that race is the most “soundtrack” event I know: one can hear music pretty much everywhere coming out of those massive “Lautsprecher” all around the track. Ring fans are nuts.

This is why I got this idea of mixing music with my photography. The game is simple: try to remember what music I could hear playing when I shot a specific photo. And if I could not hear any tune (which is rare), the music that was playing in my mind (which is frequent).

1. Ride Of The Valkyries 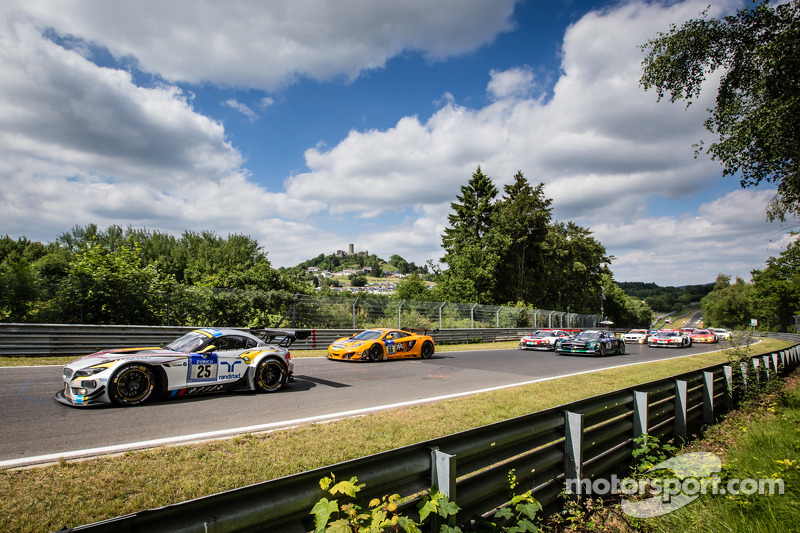 For our number one "photo-tune", let’s go mega-loud. Hey, 175 cars about to take the start of a 24-hour race on the biggest and scariest track in the world. Things can’t be more epic and grandiose than this. So we definitely need an epic and grandiose soundtrack and for this, Richard Wagner’s “Ride Of The Valkyries” is a perfect match. And just in case your musical culture stops with Lady Gaga, here’s the link for the DJ Dick W.’s timeless masterpiece: 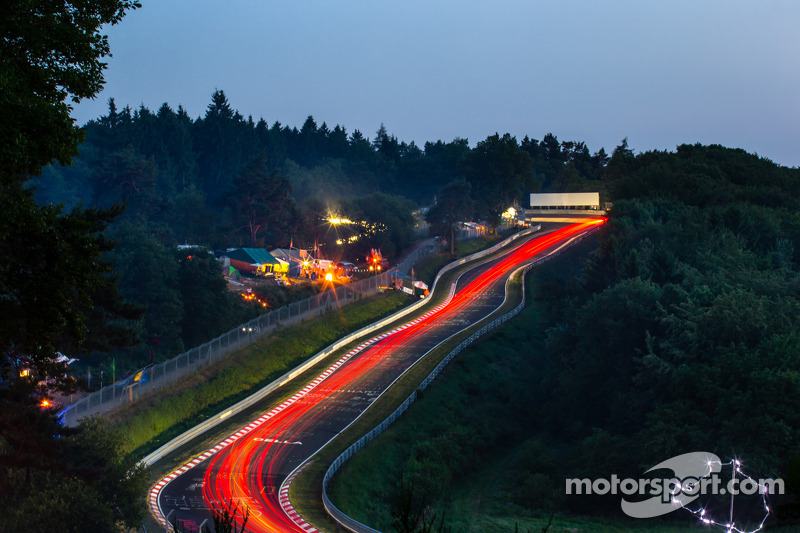 Trailing lights going up to Karussell

For our second spot, I’m going with the track that was playing when I shot it. Beware, though: things are extremely wild in that huge camping going from Brünnchen all the way to the Karussell and Klostertal. When I manually opened my 1Dx shutter for a time exposure of the scene overlooking Klostertal, I heard the first beat of Nina Hagen’s “African Reggae”. My first thought is that it was a bizarre soundtrack for this scene, but after a minute, I realized it was the perfect track: tribal beats with German lyrics - hey, no one can ever accuse German fans to have musical tastes that are cliché…

Oh and even better, and this time exposure is almost 4 minutes, pretty much the same running length than “African Reggae”. For those who are still following: shot at 22h30, standing high over Klostertal, with the Steilstrecke not very far behind me.

And here's the track from Frau Hagen: 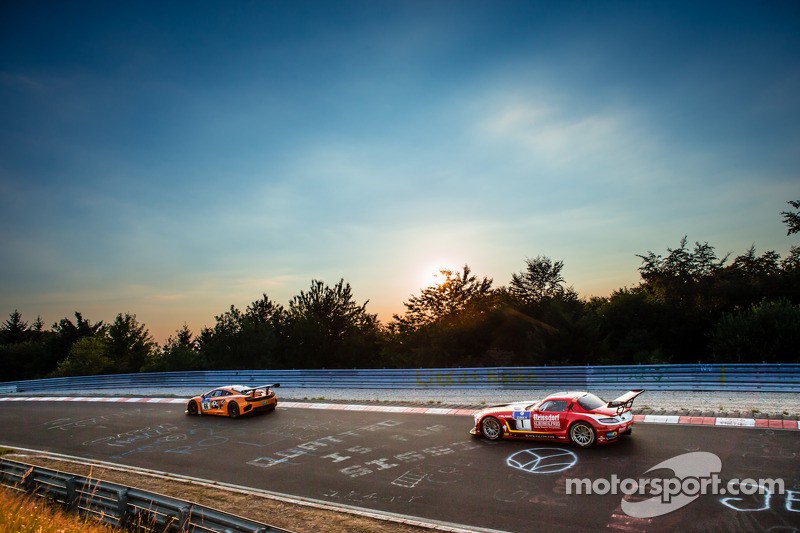 For this one, let’s go with the flow and use a track that was actually playing when I shot it. Simple? Not quite. For a while, when the sun starts setting down on Schwalbenschwanz (a top spot for sunset, IMO), there was a bizarre 3-way musical war raging, with one guy playing some cheesy Schlager music, another one rocking it to some heavy metal music and one who was pumping some techno. At the end, the loudest amps won and we got to hear some nice trancy tunes right on time for sunset - if I remember well, Paul van Dyk’s beautiful “For An Angel” was playing when I shot this one. Perfect mix: smooth trance and sunset mixed with a McLaren and an AMG SLS.

Enjoy "For An Angel": 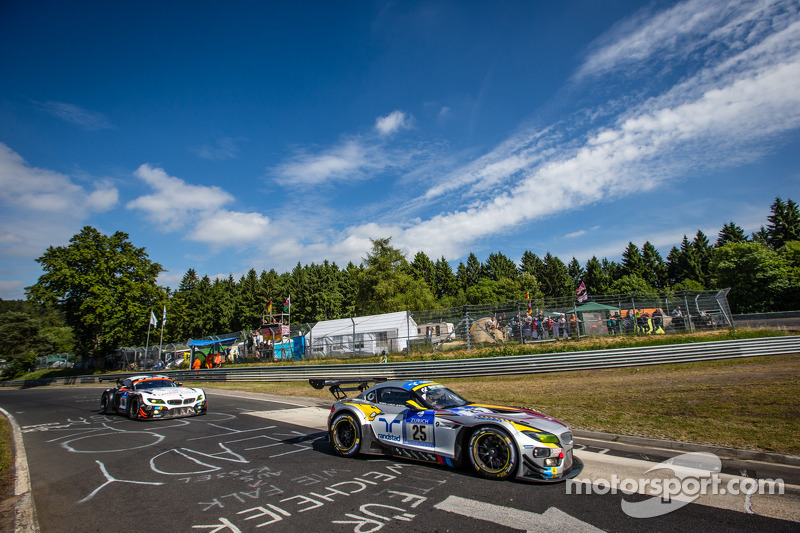 First practice session of the weekend plus nice summer-like conditions called for the most photogenic race track curve in the world: the Karussell. Shooting from the outside of the curve with the thick forest behind, one can easily hear the fan camping inside, a mere 20 meters away across the track. And as in many places on the Nordschleife, musical entertainment is (disturbingly) eclectic, ranging from Heino to Metallica and everything in between. Shortly after the start of the session and while we could feel the first cars rushing towards the Karussell, some fan loudly cranked out Falco’s classic “Der Kommissar”. Perfect tune to go along with the start of a practice session, and even better, I noticed the song ended right at the moment I could hear the loud noise of the first skid plate hitting the concrete banking, Karussell-style. 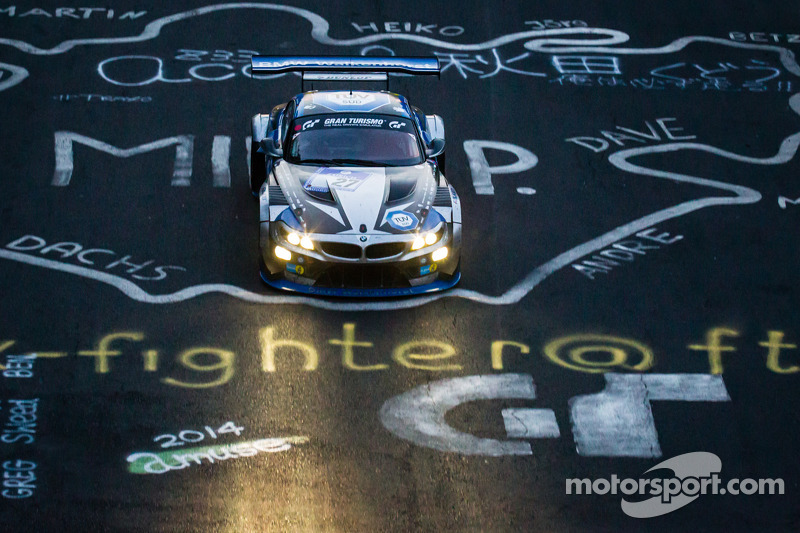 One again here, I’m going for a tune that was in my head, when I shot this one. No choice here as the location where I shot this one is quite far from any fans and their accompanying music… So… Late (late) night or more like early morning, but still blue-dark. A color-matching BMW Z4 GT3 blasting at 300 km/h on a graffiti canvas… What better than some underground deep-house track? Kele Okereke’s “The New Feel” was playing in my mind at this very moment - don’t worry if you don’t know the track, you don’t have too. It’s as underground and groovy than a Z4 GT3 at 5:30 in the morning - judge it by yourself: 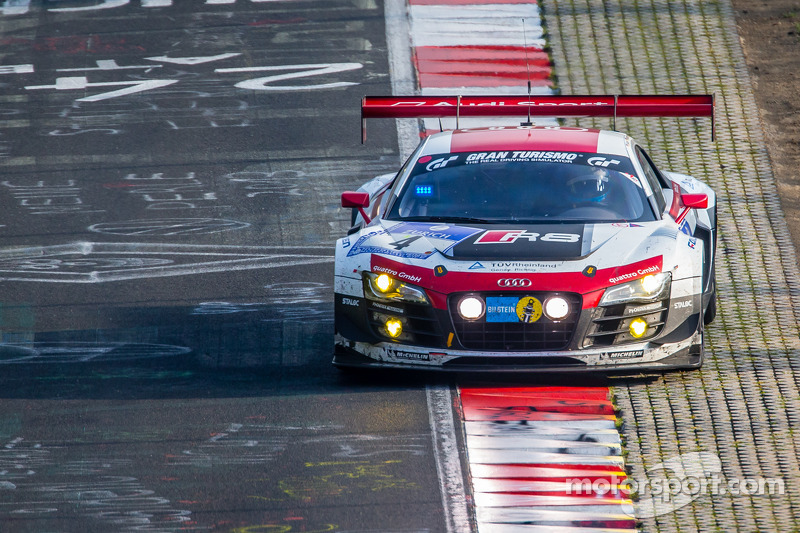 After the “sunrise session” on the Döttinger Höhe, I was back at Brünnchen for that nice light we had on Sunday morning. This time, we’re back using actual music playing in the camping and Brünnchen has plenty (plenty…) of that. Only thing is that in terms of musical tastes, Brünnchen is a hodgepodge of styles ranging from death metal to speed techno and opera - just about everything goes (same thing than the Brünnchen fans, actually…). So after about 15 minutes of odd stuff that I couldn’t figure, some camper started to play “Stereo Love” by Edward Maya & Vika Jigulina. That was OK for me, nice morning upbeat music to go with the flow. Incidentally, someone was really pushing that race winning #4 Phoenix Audi R8 LMS on Sunday morning - I was not surprised to see that car lead and eventually win the race. Great entertainment and great car control ;-) 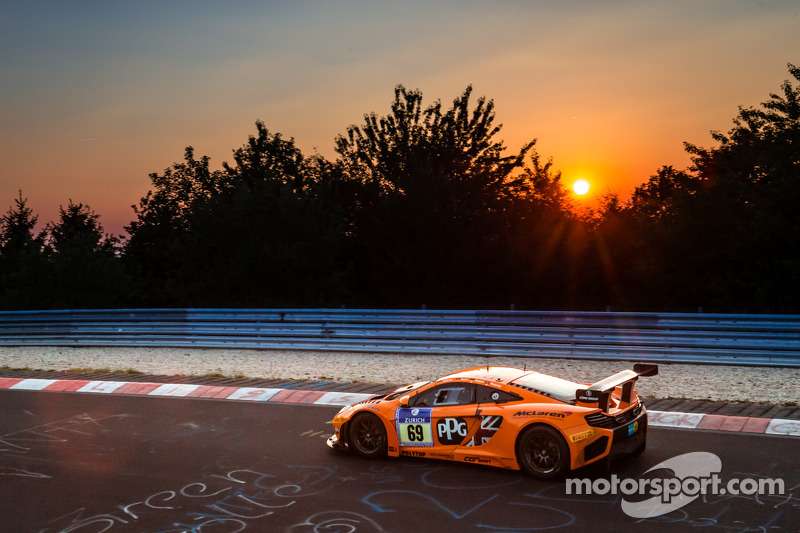 Number 7 in our countdown: I must go for an inspiring tune, appropriate for a sunset. So how about Chicane’s balearic classic “Offshore”? Yep, this will work. OK, Schwalbenschwanz is somewhat far from Ibiza, but the sunset spirit is the same. Sort of. Anyway, this is the tune I had in my head when I shot this one. Oh, and a perfect color match with the orange McLaren…

Chillout by listening to Offshore: 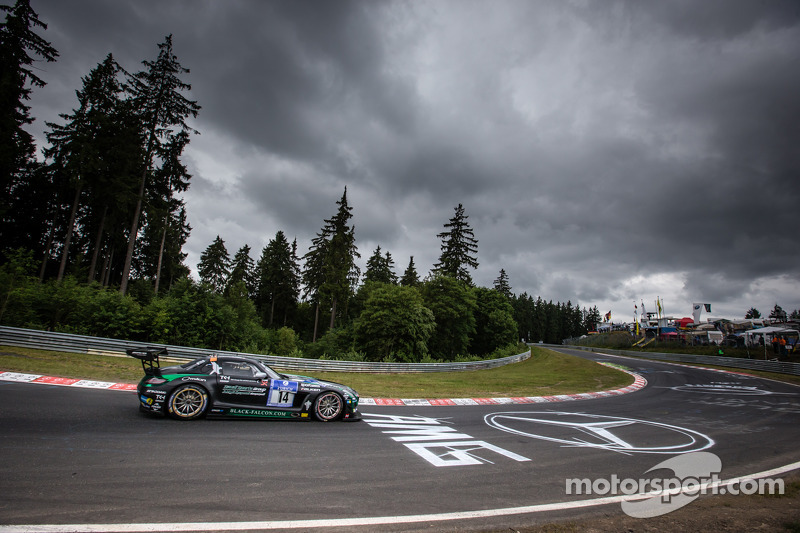 The Friday morning qualifying session brought weather and light conditions that are oh-so typical of the Nürburgring, but at least it wasn’t raining. But, wow, that sky was so low at Hatzenbach that I had the feeling those thick clouds would fall upon us. I couldn’t help myself from humming Adele’s instant classic “Skyfall”. Great, because the music playing in the camping at the back at that moment was more or less inspiring (which is unusual at the Ring). Oh, and yes, I am aware: this is an SLS GT3 about to run over an AMG and Mercedes on-track graffiti. I planned it this way ;-)

Listen to Skyfall - in the (unlikely) event that you never heard it: 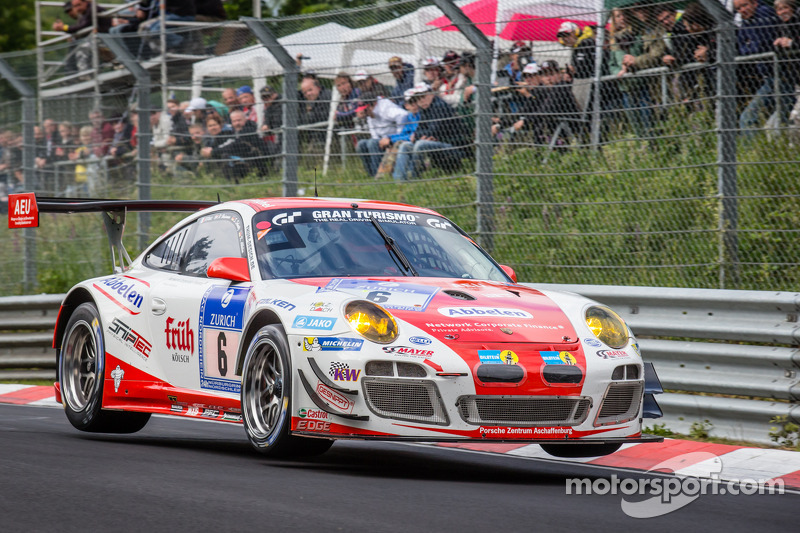 This year, summer arrived right on time for the Friday top-30 qualifying session. And what better place for this frantic and very fast session than the majestic Pflanzgarten. This classic and epic section of the Nordschleife has to be the trickiest and perhaps dangerous part of the track, with a lot of airborne time and changes of racing line. This place is wild and the session so intense, that there is no time to pay attention to any ambient music. One has to make its own tune… So: summer, classic, epic, tricky, majestic, fast, aerial, crazy rhythm… It has to be Vivaldi’s “Summer” from the “Four Seasons”

Oh, and the “Presto” part, of course. And even better, conducted by Herbert Von Karajan - who was a major Porsche lover (hence my photo selection): 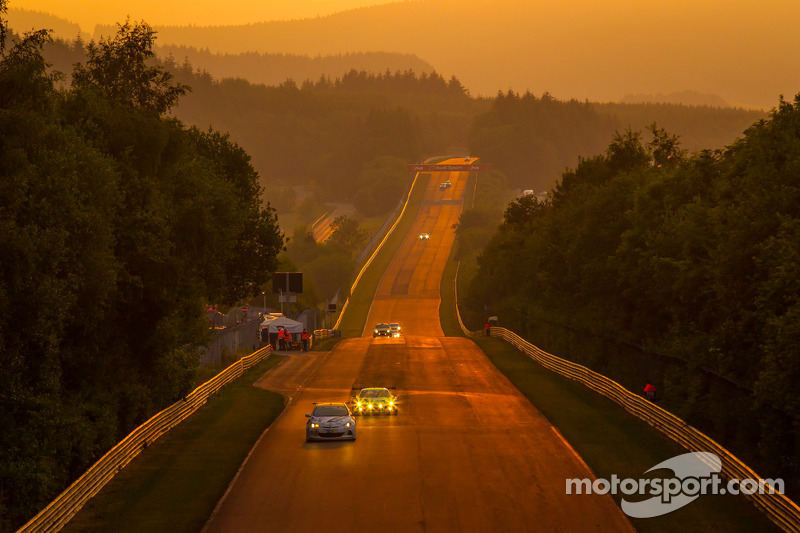 Sunrise on the Döttinger Höhe

Kind of a weird title for my last "photo-tune", but the song playing in my head at this very moment was “Bakerman” from Laid Back (the deep house remix, thank you very much). I like the easy vibe of this track, perfect for a sunrise on the Döttinger Höhe. And speaking of this year’s Sunday morning sunrise at the 24 Hours of the Nürburgring: it was somewhat strange. A cloud cover blocked any hope of a real sunrise on the horizon, but once the sun got higher above the clouds, it did it in a sudden manner granting us with spectacular orange and gold tones mixed with a diffused fog. The whole thing probably lasted 10 minutes, max.

“You’ve got to cool down, relax, take it easy”:

See all my photos from the 2014 24 Hours of the Nürburgring by clicking this link. Enjoy!

Strakka Racing: The evolution of a Le Mans winning team

The Spirit of Le Mans: the story of an award-winning photo

Latest picture on my screen saver: 'S' like Simonsen

Black Falcon takes outright win at the 24H Dubai in 2018