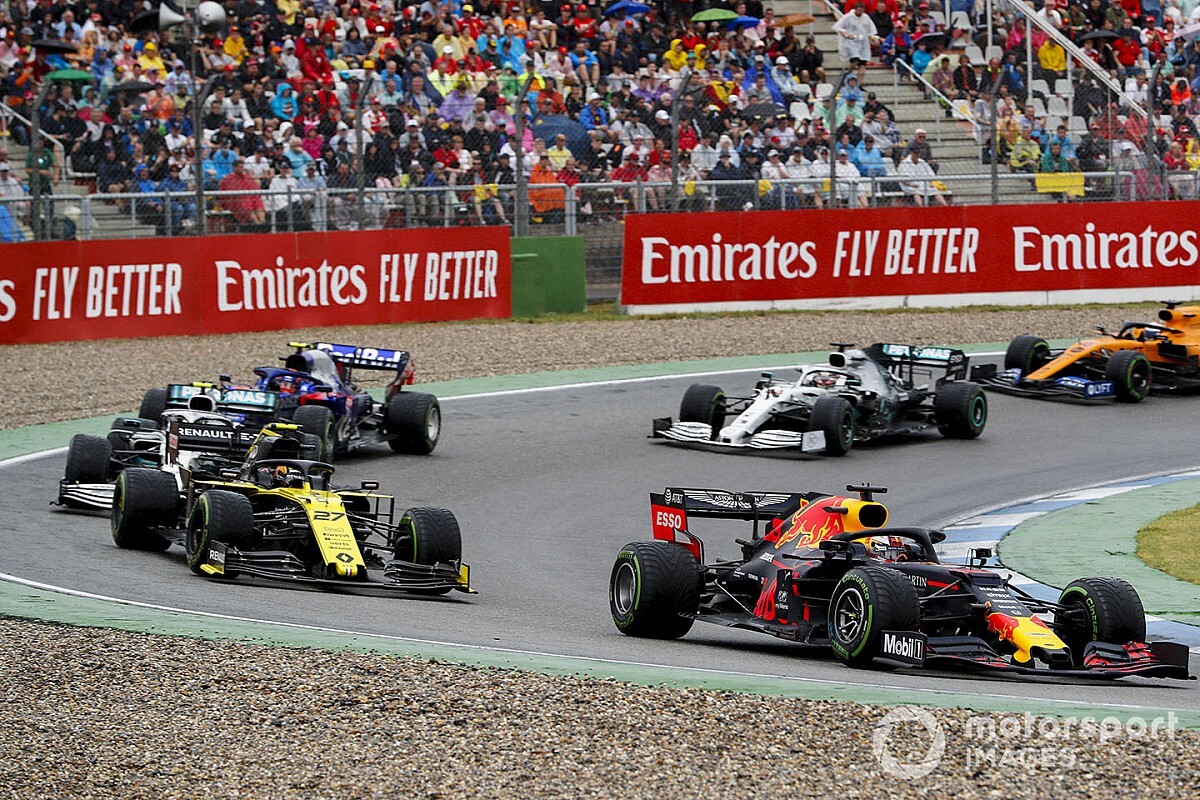 The chaotic events of this year’s rain-hit German Grand Prix have been tipped to become a more regular occurrence in the dry once Formula 1’s planned 2021 overhaul is enacted.

This year’s Hockenheim race started after heavy rain and conditions changed throughout the grand prix as the track dried before further rain complicated matters again.

Lewis Hamilton went off while leading, his Mercedes teammate Valtteri Bottas crashed heavily and Ferrari driver Charles Leclerc was one of many others to shunt in the tricky conditions.

Toro Rosso celebrated a shock podium in the race as Daniil Kvyat finished third after running as high as second, with Racing Point’s Lance Stroll also in top-three contention until the very end.

Alfa Romeo team principal Frederic Vasseur, whose driver Kimi Raikkonen ran third on the opening lap in Germany, told Motorsport.com that making such mad races a bigger possibility from 2021 is “the target”.

“If mechanically they reduce the gap between the midfield and the top teams you will have some events, perhaps not 50%, but some events in the season where something like [the German GP] can happen,” said Vasseur.

“The feeling would be huge for the teams, spectators, drivers, to have this possibility [to fight for top-six positions on merit] in mind.

“So far it is not the case. The top six could have a crash on the first lap, come back to the pits, change the nose, change the rear wing, come back and they are still able to lap us.

“You have no expectations beyond just to be P7. But I feel it is getting less the case.”

Vasseur believes the incoming budget cap will not be a “huge game-changer” on its own but is buoyed by the prospect of it being combined with fairer financial distribution and altered technical regulations.

Red Bull team principal Christian Horner, who celebrated victory for Max Verstappen in the German GP, thinks a combination of aero rules and tyre specification will be key to the quality of F1’s spectacle.

Asked if 2021 would at least make it possible for the German GP to occur in the dry, Horner told Motorsport.com: “I think so. We saw great racing at Austria as well and even at Silverstone.

“The tyres play a crucial role in all of that, so getting the tyres right, getting the aerodynamics right is going to be important so the drivers can follow each other and race hard against each other.”

F1 was struck by massive criticism following the French GP, but benefitted from four excellent races before the summer break.

“The cars are enormously complicated and I think we can definitely make them less complex.

“I think what we want to achieve is more races like the ones we’ve seen [after France].”