Sebastian Vettel has baulked at claims he will almost certainly stroll to an historic third consecutive drivers' title in 2012.

Some pundits think that, given the 24-year-old's huge 122-point championship win over McLaren's Jenson Button this year, it is almost inconceivable his and Red Bull's advantage will be eroded in the 80 days until Melbourne.

"We will try (to win again)," the German agreed in an interview with France's Auto Hebdo.

"But the beauty of this sport is that before a new season, all the points counters are reset.

"It is up to Red Bull to build a competitive chassis and Renault to produce a powerful and reliable engine.

"There is no certainty; nothing is sure about this (success) continuing," added Vettel. 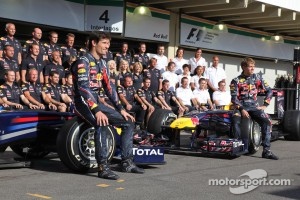 He said recently that his meteoric season was the result of hard work that must now continue.

"All year long (we were) pushing to keep the car at the level that it was," said Vettel.

"McLaren were pushing massively and I think at the end we were pretty even. I don't think that one car really had the edge."

Briton Button, Vettel's title runner-up, doesn't agree with his rival's last comment but he does think McLaren can mount a serious challenge next year.

"It hasn't been perfect, Red Bull have been quicker than us, more consistent than us," he said.

"All round it's been a reasonable season. We've grown as a team together and I think that we have a very good base going into 2012," added Button.

The key for McLaren, he thinks, is to have a winter unlike pre-2011, when the team abandoned a complex exhaust system in order to hurriedly copy Red Bull's approach.

"It's wrong to say we could have fought them if we had a better winter," said the 2009 world champion. "We don't know that.

"What we do know is that we didn't have a very good winter. The guys did a great job of turning it around for the first race but obviously you lose a lot of preparation work," said Button.