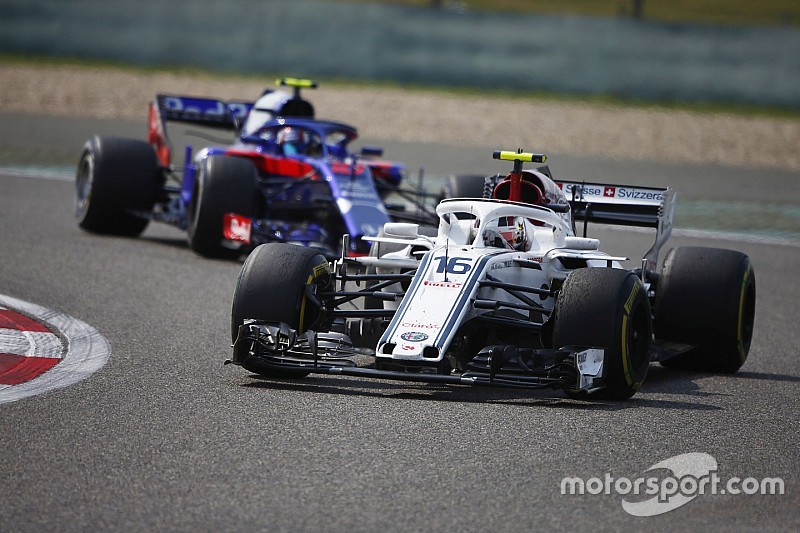 Pierre Gasly fears Toro Rosso will be overhauled by Sauber in Formula 1's teams’ championship fight because of the “huge difference” Ferrari’s engine has made to the Swiss team’s revival.

Sauber has almost caught Toro Rosso for eighth in the constructors’ championship already, having scored points in six races this season, and would have leapfrogged the Red Bull junior team had Charles Leclerc not retired from the British Grand Prix following a botched pitstop.

After finishing last in the constructors’ championship in 2017, Sauber is on the up with new ownership and a new management team with Frederic Vasseur as team principal.

Gasly said: “Sauber is really fast, so I think it will really, really difficult to keep them behind with the pace we have because they have a stronger package.

“In terms of chassis we are still ahead of them but in terms of engine and power unit package that they get from Ferrari they just make a huge difference with that.

“I expect them to score consistently in the points now, so it will be really difficult to keep them behind but we will try what we can.”

Gasly finished fourth in Bahrain and seventh in Monaco and lost a point at Silverstone last weekend following a “ridiculous” post-race penalty, while teammate Brendon Hartley scored his only point of the campaign thus far with 10th in Azerbaijan.

“We need to make sure that when there are opportunities like Bahrain and Monaco we are there to score points,” said Gasly.

“In normal conditions at the moment we don’t have the package and speed to fight there.

“Haas is really fast and Sauber is really fast with the Ferrari engine. We saw Force India is doing well and Renault has a really strong package between the chassis and the power unit.

“The chassis is good but with the engine we have we lose too much time.

“Budapest is a track where we could have an opportunity and we need to make sure we do everything perfectly to get the few points if we have the possibility.”

As well as using Ferrari’s latest-spec F1 engine, having run a year-old product in 2017, Sauber has been investing significantly in its Hinwil team.

Renault’s Carlos Sainz said Sauber’s progress this season, the team having made Q3 twice in three races with Leclerc, is proof of Ferrari helping its customers make “giant steps forward”.

“If you look at where Sauber started in Australia and where they are now is worthy of admiration,” he added.

Sauber driver Marcus Ericsson said the team’s current position was “a massive difference” to 12 months ago.

“The financial platform is a lot strong and then everything builds on from there,” he said.

“We’re getting some great people into the team and then the people [already there] have grown with motivation.

“We are in a completely different world compared to 12 months ago.

“I think it’s very impressive to see the way we have developed as a team.”

Why Singapore is one of F1's most important races