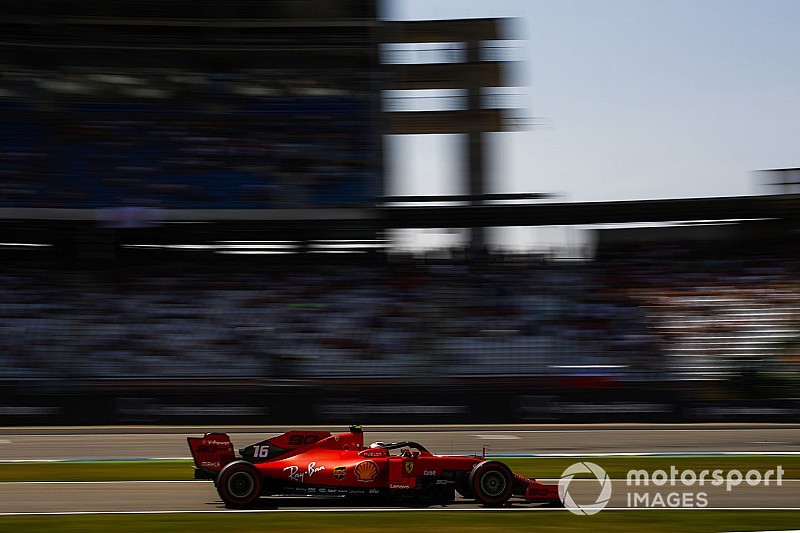 Charles Leclerc was fastest again for Ferrari in third practice for the 2019 German Grand Prix, outpacing the quickest Mercedes by half a second.

Leclerc’s 1m12.380s lap, set during his second run on soft tyres, stood to the end of the session and was 0.264s faster than teammate Sebastian Vettel’s best.

Red Bull’s Max Verstappen split the Ferraris with a 1m12.548s as Mercedes came up short. Valtteri Bottas was 0.510s off Leclerc’s benchmark time, while Lewis Hamilton was sixth overall, 0.585s down and slower than the Haas of Kevin Magnussen.

An overnight change in the weather as the sweltering heat gave way to thunderstorms made for vastly different track conditions, with ambients of 27C and a track temperature that hovered around 40C, well below Friday’s peaks. Even so, there was little urgency at the beginning of the session and 10 minutes passed before anyone set a timed lap.

Any suggestion that Ferrari’s relative strength might diminish in the cooler conditions was quickly dispelled by Leclerc, who went quickest of all in the initial running with a 1m12.736s he set during a six-lap stint on the soft-compound tyres. Vettel’s best effort on a similar run plan was half a second off.

At this point both Mercedes drivers were focusing on race simulations but Hamilton set a tidy time of 1m13.463s at the beginning of a 15-lap run on the softs. Bottas was just over two tenths shy on a similar run plan, although his stint began with an off-track moment at Turn 2.

Red Bull’s pace on the medium tyres was very respectable early in the session - or at least Verstappen’s was, since his best lap was marginally faster than the soft-shod Hamilton. Pierre Gasly, whose car was rebuilt around a new tub after his crash in FP2, was half a second adrift of his teammate after their first runs.

On the soft rubber Verstappen was even more punchy. While the Ferraris made incremental improvements on their second soft-tyre runs - Leclerc to 1m12.380s, Vettel to 1m12.644s - Verstappen split them with his 1m12.548s.

The Mercedes drivers continued to struggle to match Leclerc on their second soft-tyre runs as Bottas circulated half a second off the benchmark lap and Hamilton had a time struck off for violating track limits.

The results of the session will have generated more intrigue for Haas, which is attempting to benchmark its latest developments against the troublesome VF-19’s early specification by running Romain Grosjean with the Australian Grand Prix aero package. In FP2 Magnussen was 1.29s off Grosjean’s best, but in today’s cooler conditions he was initially over two-tenths faster than Grosjean over the course of a similar seven-lap run plan.

Behind Hamilton there was a substantial time gap as the latter portion of the top 10 came up nearly a second off the frontrunning pace. While Kimi Raikkonen was ‘best of the rest’ early on, he was trumped by late efforts from Gasly and McLaren’s Carlos Sainz.

German GP qualifying as it happened