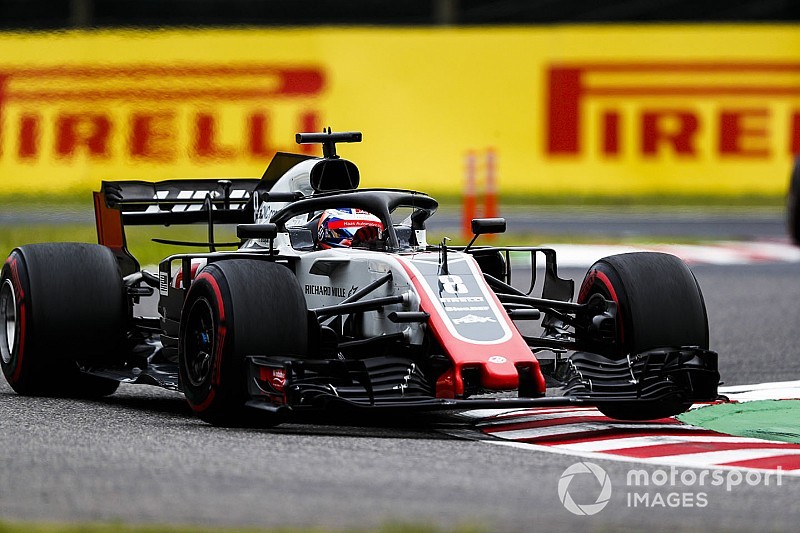 Romain Grosjean admits he came "very close" to following Ferrari in going out with intermediate tyres in the final segment of Formula 1 qualifying for the Japanese Grand Prix.

Ferrari paid the price for the decision to leave the pitlane on intermediates at the start of Q3, when the track was still dry, with Sebastian Vettel finishing down in ninth position.

Grosjean was one of the stars of qualifying, placing the Haas in fifth, but he acknowledged a last-minute change of mind stopped him from following Ferrari's strategy.

When asked how close he was to going out on intermediates, the Frenchman said: "Very close, very close. We had all the settings on the steering wheel for inters.

"Tyre switch, brake balance, everything was inters, and at the last minute again, when we saw the footage of the cars going out and not sliding too much, we reverted everything to slicks and it went fine."

He added: "We had no idea, basically, because when we came back in Q2 in the box it was very hard to keep the car on track with slicks.

"So we were in the garage debating which tyre to go out with, but I just said: 'It's a gamble, boys. It's a gamble to go like Ferrari on inters and then when the rain comes, you are a superstar. If it was dry enough, not great.'

"We took the risk to wait and to get close to the rain shower coming and to see what people were doing and when we saw Mercedes and Force India into sector 1 going around and not sliding too much then we decided to go.

"It was the right choice at the time, but it could have gone both ways because you haven't driven for like 10 minutes so you never know."

Apart from the Mercedes drivers, Grosjean is the only top 10 qualifier that will start the race on soft tyres.

The Haas driver said it was a "brave" move to use the harder compound for his Q2 lap, and expects the gamble to pay off in the race.

"It wasn't an easy move because I used the soft in FP1," he explained.

"My first feeling was the soft was a really good tyre but it was at 10am on Friday morning and I didn't run it until Q2 and Q2 had rain coming so kind of knew it was one attempt.

"It was a brave move but first feeling and the instinct was that it was fine and I think actually my fastest lap of all the session was on softs.

"Tomorrow with temperature going up it should be the tyre to be on."