Haas "in the mix" with Red Bull at Barcelona, says Grosjean 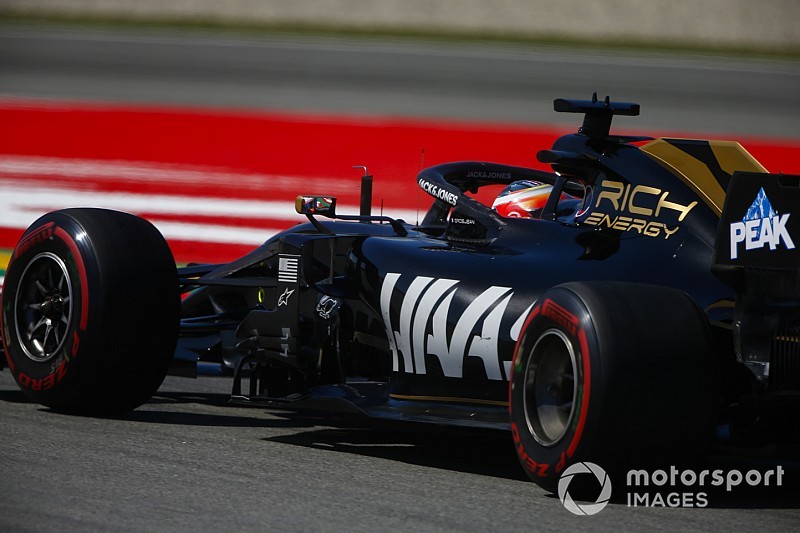 Romain Grosjean thinks Haas can be in the mix to ‘play’ with Red Bull at the Spanish Grand Prix, after a strong showing in Friday practice.

The Frenchman made good use of a major new update package to end up sixth-fastest in the afternoon session at Barcelona, ahead of Red Bull’s Pierre Gasly, and he thinks the form can be carried through to qualifying.

“I am feeling optimistic,” said Grosjean. “I am feeling like we have got a good chance to qualify both cars in the top ten and maybe play with the Red Bull.

“Saying that they always seem to find something in qualifying, but I think we have more coming as well. Let’s see [on Saturday]. It could be a good day.”

Pushed on how realistic a fight with Red Bull to be third best in Barcelona was, Grosjean said: “I think we are in the mix with them. Dream big and see where we go.”

Teammate Kevin Magnussen, who will get to run the new upgrade package from final free practice on Saturday, said that Red Bull was clearly a target but he was wary that the situation could change when engines are turned up in qualifying.

“We will see how the Red Bulls do tomorrow, but they looked to be within reach today,” said the Dane.

“You never know what they are running on the engine and so on, so they will probably pick up the pace tomorrow, and our target will be to be the fourth best team. Let’s see how it goes.

“McLaren looked fast, at least with [Carlos] Sainz, and sometimes the Toro Rossos too, so it will be interesting tomorrow.”

While cautious about the chances of beating Red Bull, Magnussen said all the indications were for a strong weekend as the outfit was not hit with the kind of tyre woes it has suffered in recent races.

“I am optimistic,” he said. “It is a track that is very hard to overtake on. Our race pace looks better and our qualifying pace looks fantastic, so no reason to not be positive.

“I would love to find answers and to understand our main issues, which is the management of tyres in race mode. I think we are looking better today, but I don’t know if we know why."

Grosjean says the pace in Spanish GP practice has proven that Haas’s car is strong but that its tyre difficulties are overshadowing things.

“We have proven that the baseline of the car is very good, but recently we have been struggling with getting the tyres in the window,” he said.

“It is a bit sad that we have to rely on getting the tyres to work to be able to perform well. We need to improve that aspect. Here we were not too worried because from winter testing, what we knew, there is a lot of energy going in in Barcelona so it is fine.

“For the future I still think we need to dig a bit more. But for the time being, for the weekend, I enjoy driving the car. I felt really good from the first lap this morning and just kept going.”