HRT will be facing its own challenge at Interlagos

The 2012 Formula 1 World Championship draws to a close in Brazil as the Autodromo Jose Carlos Pace stages the 20th and final Grand Prix of the season. 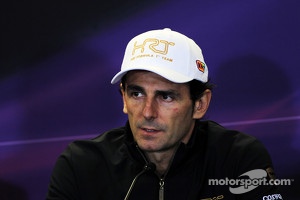 HRT Formula 1 Team and its drivers Pedro de la Rosa and Narain Karthikeyan, will be looking to end the season on a positive note after a challenging but rewarding season.

The 4.309 km track, located in Interlagos, is a fast one and one of the few running anti-clockwise on the calendar. The bumpy surface and the constant ups and downs mean that the cars and the drivers are put through their paces.

The potential unstable weather conditions may also add up to the excitement surrounding one of the most popular races on the calendar and last event of the 2012 season.

Pirelli has nominated its PZero hard (prime) and medium (option) for this race.

Pedro de la Rosa: "It is incredible how time flies and for us to get to Brazil for the last race of the season, after everything we’ve achieved, makes me very proud.

The race in Brazil is always a very special Grand Prix, not only because of the track’s layout but also for the Formula 1 history and the fans. It is a short but challenging track where it is possible to overtake.

But the weather and the possible showers can also play an important role in the race’s outcome. If that would be the case, we will be ready to take our chances. It is the last race of the season and we will do our best to achieve a good result.

It would be something fantastic to do, not only for the whole team that has worked so hard throughout the year, but also for the fans that have been an amazing support this season”.

Narain Karthikeyan: "Interlagos is a circuit that I know and I remember from when I drove there in 2005. I like the track very much and there is also so much heritage of Formula 1.

The layout has some interesting parts and the fact that it goes up and down makes it quite spectacular. But also the crowds make it a rather special one. For the drivers, it is physically very demanding because it is one of the few circuits that run anticlockwise.

It is the last race of the season and we are all highly motivated to do a good job to finish the season in the best possible way”.

Luis Pérez-Sala, Team Principal: "After a few races at modern tracks, we head now to one of the most historic circuits on the calendar.

The track’s layout is quite a special one and the atmosphere there is fantastic. We are all looking forward to one of the best races of the season where the Championship title will be decided.

At HRT Formula 1 Team, we will be facing our own challenge but I know that everyone will give their best, as they have done since we started with this amazing project.

We managed to build it from scratch in record time and we can all be proud of what we have achieved. I am really proud of every single team member that made this happen, with their effort and commitment, and I am confident that in Brazil we can have a good race.

That would be a nice reward for the team to conclude this very long and tough season with a positive result”.

Teams get first taste of Pirelli's 2013 tires in São Paulo