Mercedes' advantage over Ferrari in Australian Grand Prix qualifying was a "real shock" to Lewis Hamilton, while his teammate Valtteri Bottas admitted he was "blown away" by their performance. 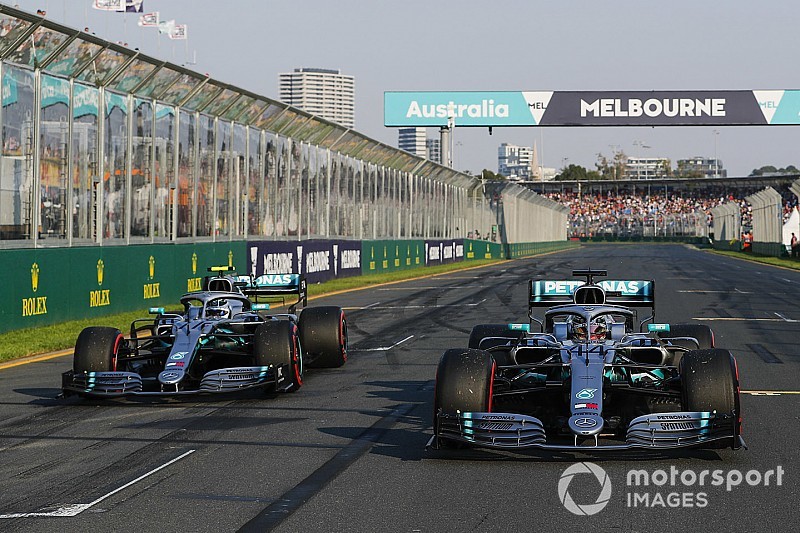 Hamilton edged Bottas by just over a tenth to steal pole at the end of a frantic first shootout of the season in Melbourne, with testing benchmark Sebastian Vettel trailing Hamilton by 0.7s.

Ferrari had widely been considered to hold an advantage heading to Australia, and Hamilton insisted after qualifying that Mercedes "truly believed" it was behind, while Bottas claimed nobody in the team "could have imagined we would be in this position".

Asked by Motorsport.com if he agreed with his teammate's admission he was "a little bit blown away" by Mercedes' performance, Hamilton said: "Absolutely. There was absolutely no [indicator of this result after testing].

"I felt good that we had a decent package to work with but we were aware that we might be slightly behind.

"That is what we honestly thought when they showed us the summary of how testing went: we were behind Ferrari from the analysis we did.

"We haven't changed the car, we've understood the car more.

"Yesterday Ferrari were with us, they looked like they were a little bit heavy on fuel initially and then they dropped the fuel and were quite on par on performance.

"We thought we were closer than we thought it would be after testing, and all of a sudden they lost a bit of performance in [FP3], which we were not expecting.

Hamilton repeated his Friday claim that Mercedes had not made changes to the car itself since testing.

He also said the change in fortune between the teams, and the videos of Vettel's laps in testing, meant he had even asked his rival if Ferrari had run the car so low on fuel that they were "on fumes" at Barcelona.

"He says he wasn't," added Hamilton. "It is a difficult circuit [Albert Park] and it is quite gusty here as well.

"It could be a number of things, but I am really, really grateful for where our car is and where it enabled us to be today.

"I know Ferrari will be pushing hard and progressing over the coming days and tomorrow I am sure that they will put up a good fight as they are always strong in the races."

Hamilton said he had to "brush off" an unusual mistake on his first flying lap in Q3 and "pull something special at the end" in order to topple teammate Bottas.

He added that there "could not really be a better way to start the year" than Mercedes' crushing one-two.

Surprised Vettel says Ferrari "should be better than this"