Nov.26 (GMM) Renault is open to supplying more Formula One teams with engines.

That is the news, after the French carmaker's president Carlos Ghosn made a visit at the weekend to the Brazilian Grand Prix. 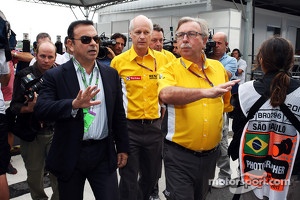 But there have been reports the other Red Bull-owned team, Toro Rosso, will switch from Ferrari to Renault power for the new turbo V6 rules in 2014.

"During a small media round he (Ghosn) confirmed that Renault will equip more teams with engines," the journalist Mathias Brunner wrote in a Speed Week report from Interlagos.

With Craig Pollock's 2014 'Pure' engine foray now regarded as defunct, it is expected that HRT and Marussia supplier Cosworth will bow out of F1 along with the V8 rules at the end of next year.

"(For) 2014 we've got, as far as I know, only three manufacturers (Renault, Ferrari and Mercedes) committed to the sport," McLaren team boss Martin Whitmarsh said in Brazil.

But there remain rumours Honda, having pulled out of the sport at the end of 2008 amid the global financial crisis, is interested in the 2014 rules.

"But there's no concrete signs they're doing anything at the moment," said Ross Brawn, who was Honda's team principal.

"I gather, as a company, they're improving after some difficult years and I think there are lots of engineers there who would love to get involved."

Promoted: Ross Brawn on moving the sport forwards for fans