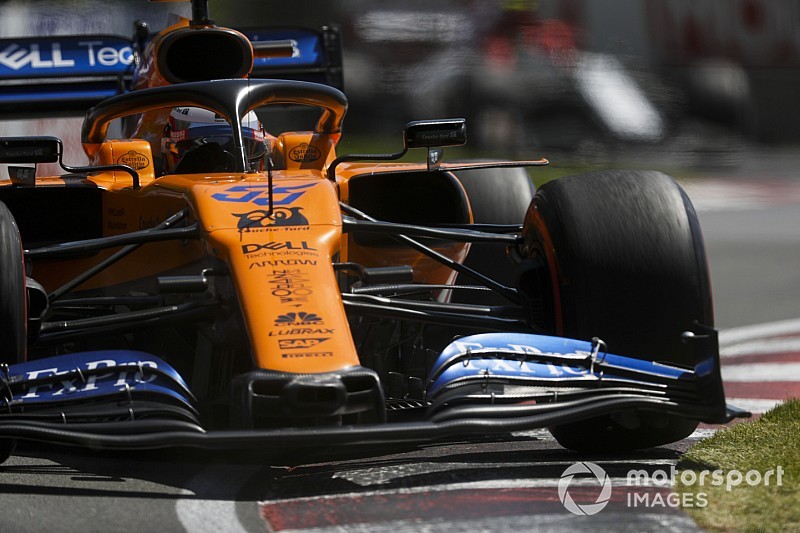 Carlos Sainz admitted he was "angry" after his Canadian Grand Prix was compromised by an unscheduled early stop that left him with a marathon 67-lap stint to the flag.

Sainz had to pit at the end of the third lap after a visor tear-off became lodged in a brake duct, causing overheating.

He switch to the hard tyres and despite ongoing temperature issues he rose to ninth place by lap 45, only to drop behind Lance Stroll and Daniil Kvyat as his rear tyres finally gave up.

"Obviously now we're very disappointed with not finishing in the points," Sainz said.

"Putting everything into perspective and pitting on lap three for an issue with the brakes, putting on the hards and trying to go until the end of the race, it nearly worked. The tyres were destroyed at the end - no rear tyres left.

"We were five laps short from making it, but that's racing. I'm angry with the final result, angry with the result of the weekend because without any problems we should have finished in the points, but these things happen."

Sainz admitted he knew it would be difficult he realised he had to go run so long on the hards.

"It's a tough situation because you have to push because you need to undercut people to have track position, and you need to overtake a lot of cars, because there was a long train of cars.

"But you need to make it to the end, and you're not knowing if to push or not to push. At the same time I had high brake temperatures. and had to lift off a lot.

"So I had to push, then not push, and then push. It was a bit of a mix, in the end we nearly made it, so I think we did the best we could, but I'm disappointed to come 11th."

McLaren team boss Andreas Seidl admitted it was a frustrating end to the weekend for the team, especially after Lando Norris had an early retirement with a suspension failure.

"We had some good Sundays recently," Seidl told Motorsport.com. "With the different incidents we had on both cars unfortunately we didn't manage to fight for points, because I think in terms of pace it was possible.

"Carlos had a tear-off inside the brake duct, so we had to box him to clear the brake duct, and put the hard tyres on, and it was just about surviving. Unfortunately the last five laps the tyres went off. I think he did a great job in trying to hang out as long as possible, but there was nothing he could do. There was nothing left on the tyre.

"Obviously it's disappointing to go away from here with zero points. We have to switch our focus to the next race in France and try to be back again in Q3 with both cars, because that was encouraging to see here, because we didn't manage it in the previous races. It seems our car still likes the tracks with the long straights."