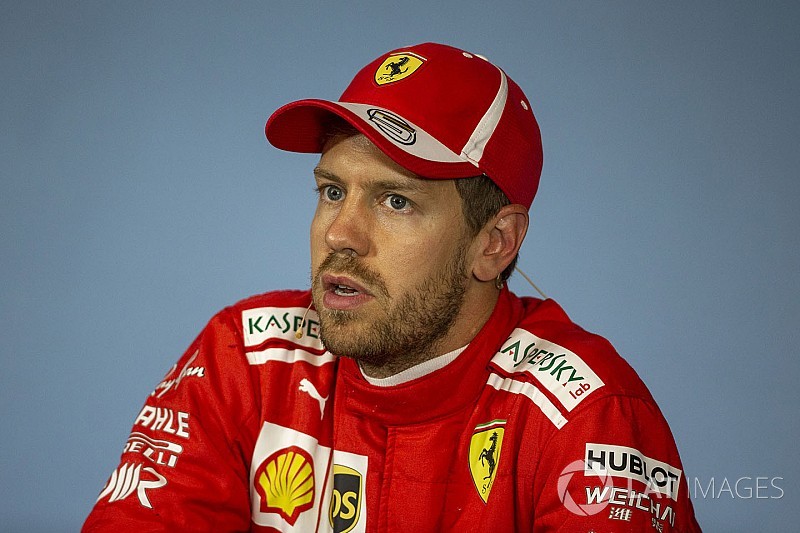 Ferrari driver Sebastian Vettel has been penalised for impeding Carlos Sainz during the second segment of qualifying for Formula 1's Austrian Grand Prix.

The German had qualified in third but will be demoted to sixth on the grid, behind teammate Kimi Raikkonen, Red Bull's Max Verstappen and the Haas car of Romain Grosjean.

Sainz was starting a last-ditch push lap in Q2 when he came up on the cruising Ferrari of Vettel on the exit of Turn 1, the Spaniard forced to move sharply to the left and go over the kerbs to avoid contact.

Sainz drew alongside Vettel and gesticulated at the German after rejoining the track, and radioed to his Renault team: "I had to take a kerb to avoid him, I nearly crashed."

Both Vettel and Sainz would make it through to the final qualifying segment, where the former placed third and the latter took ninth place.

Speaking to Spanish TV after the session, Sainz played down the impact of the run-in.

"In the end it didn't change my qualy much," Sainz said.

"It made me damage a front wing, which obviously costs money and it takes work to repair and you don't know if the wing will continue to work as well as before.

"But it didn't affect me too much.

"I think he simply didn't see me. He didn't do it on purpose. He wasn't warned on the radio."

In the post-qualifying press conference, Vettel confirmed he was indeed not informed that Sainz would be coming up on a fast lap behind him.

"I passed him on my fast lap in Turns 7 and 8 and I was looking down the main straight and I didn't see him.

"I was turning into Turn 1, trying again [to look] because I was thinking he must be there somewhere, I don't know if he was pitting or starting his lap.

"But as it turned out obviously he was trying to go for a fast lap. I couldn't see him, I wasn't told on the radio, so I can only apologise to him.

"There was no intention. I was looking down the straight, I turned around Turn 1, I was done with my lap and just wanted to make sure and there was nothing [in the mirrors] after Turn 1, which was obvious because I saw in the replay that we were side-by-side."

The stewards, however, judged that Vettel not seeing Sainz was not enough to absolve him of blame.

"It is the belief of the Stewards that notwithstanding the absence of a radio call, the driver of car 5 [Vettel], being aware of the issue of rear vision with his mirrors, should not have been so slow and on the racing line, during a slowdown lap in Qualification," their explanation read.

"Having reviewed all alleged impeding incidents since the beginning of 2016, the penalty of a drop of 3 grid positions is consistent with all other similar incidents."

In addition to the grid drop, Vettel received a penalty point on his license, taking him to three for the 12-month period.