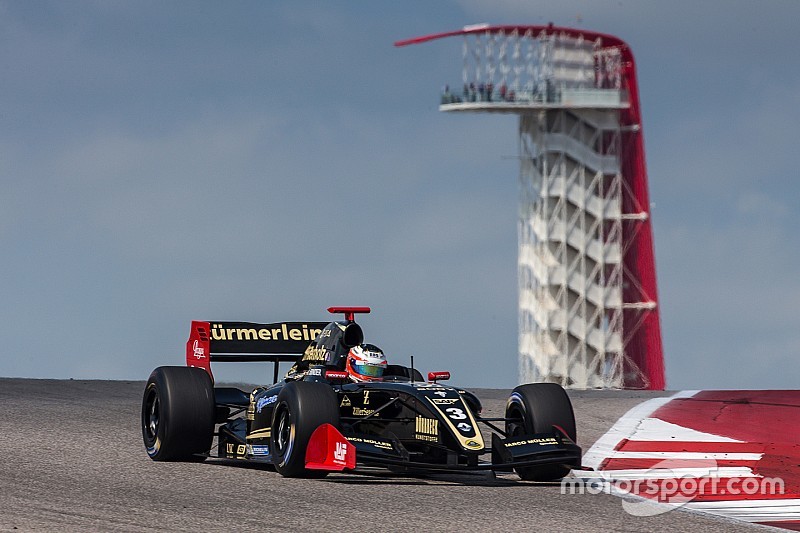 Rene Binder took his third Formula V8 3.5 win of the season after a dominant victory in Austin.

Starting from pole position, the Lotus driver held off team-mate Pietro Fittipaldi on the run up the hill to Turn 1 and settled into a rhythm which saw him open up a 0.641s gap by the end of the first lap.

Championship leader Fittipaldi wasn’t able to attack his team-mate for the lead as he had to fend off a fast-starting Matevos Isaakyan who had moved up two places to third by the time field got to the first corner.

During the opening ten minutes of the 40-minute race Isaakyan couldn’t break the Lotus domination at the front, and his relative lack of pace saw him lose third to SMP Racing team-mate Egor Orudzhev.

Binder had no such trouble from Fittipaldi as he opened up a lead of more than four seconds with Fittipaldi still struggling to find a rhythm in the high-speed corners.

However, that lead was slashed just after the half-way mark as a brief safety car period was required to recover Giuseppe Cipriani’s stalled car after a spin at Turn Seven.

Binder easily dealt with the restart but Fittipaldi lost second to Orudzhev with a great outbraking manoeuvre at the end of the back straight.

Orudzhev looked to be closing the gap to Binder in the closing stages, but didn’t have enough time left on the clock to challenge for the lead.

Behind the lead trio, a fight was starting for fourth place as Isaakyan came under pressure from Konstantin Tereschenko. On a number of occasions, the Teo Martin Motorsport driver rear-ended Isaakyan but couldn’t find a way past.

Tereschenko’s race ended four laps from home as he tried to dive up the inside of Isaakyan at Turn 12 but ran wide over the kerbs and broke his suspension. The repeated knocks from Tereschenko had also damaged Isaakyan’s car as started to struggle with the car, allowing Palou to make a robust move into fourth.

The SMP Racing driver was fortunate not to lose fifth as Roy Nissany ran out of time to close the gap any further – having being stuck behind Alfonso Celis for a number of laps – and finished sixth.

Yu Kanamaru finished seventh, overtaking Celis on the final lap to relegate the Fortec Motorsport driver to eighth with team-mate Diego Menchaca the last of the classified runners in ninth.