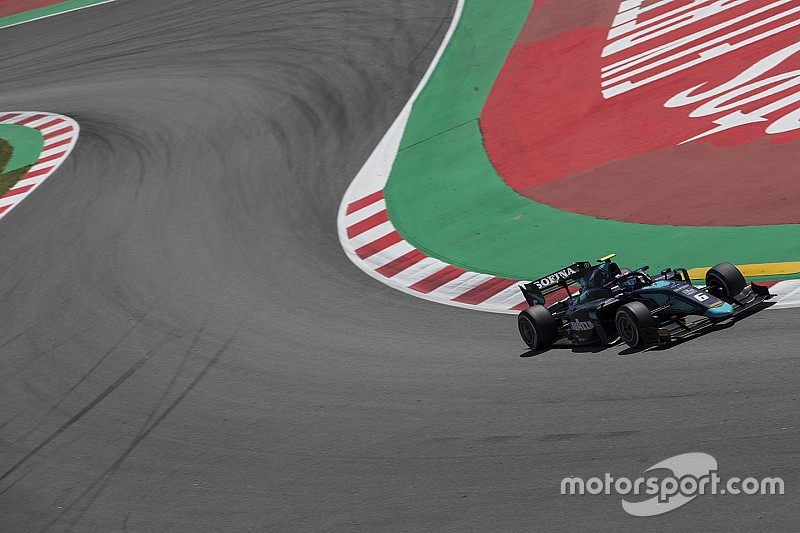 Nicholas Latifi extended his Formula 2 championship lead by winning for the third time in five races after passing rookie Guan Yu Zhou in the feature race in Barcelona.

After moving into the lead at the start, Zhou headed the pack during an early safety car phase, deployed due to a chaotic opening lap.

Giuliano Alesi and Mick Schumacher both went off at Turn 5, the former retiring on the spot and the latter continuing, only to pit with a right-rear puncture.

There was also a collision at Turn 10 where Dorian Boccolacci massively outbraked himself and hit slow-starting poleman Luca Ghiotto, who had to pit for a new front wing.

Zhou was among the first drivers to replace their softer tyres with the harder compound after the restart, with Latifi also coming into the pits from second place.

Nyck de Vries and Jack Aitken also pitted in the next two laps, the duo trading positions both before and after changing their tyres.

After all the early stops occurred, Trident's Ralph Boschung took the lead but he was overtaken by Anthoine Hubert and Jordan King, the latter pair looking most competitive of those on the alternate strategy.

With Hubert and King staying out - as they would pit with only four laps left to run - Zhou held a two-second advantage over Latifi, but the Canadian began to close in.

He was less than a second behind Zhou for the first time as the last 10 laps began, and was soon all over the Renault protege, moving around the outside to complete the overtake.

The DAMS driver then built a safe gap with ease, and cruised to the finish to take his third win of the season.

Zhou then also came under pressure from Aitken and, after keeping him at bay for a few laps, he had to surrender second place to his fellow Renault-backed driver.

Zhou still secured his maiden F2 podium in third ahead of Ghiotto, who finished just one second behind, completing a superb recovery from an opening-lap pitstop after the Boccolacci collision.

De Vries took fifth with Hubert, who rejoined the track in eighth after his late stop, gaining just two positions to finish sixth, followed by King.

Both drivers passed Callum Ilott on the last lap, the Ferrari junior having to settle for eighth and reverse-grid pole.

Nobuharu Matsushita was on course for a potential podium after the early pitstops but did not have the pace of the frontrunners and in the end dropped down to 11th.

After his puncture, Schumacher was also involved in an incident with Juan Manuel Correa, who ended up going off-track at Turn 15, and the German finished only 15th.

Nikita Mazepin was out of contention after his car slowed and was classified four laps down, while Sergio Sette Camara, who had a drive-through for speeding in the pitlane, ended up retiring from the race.