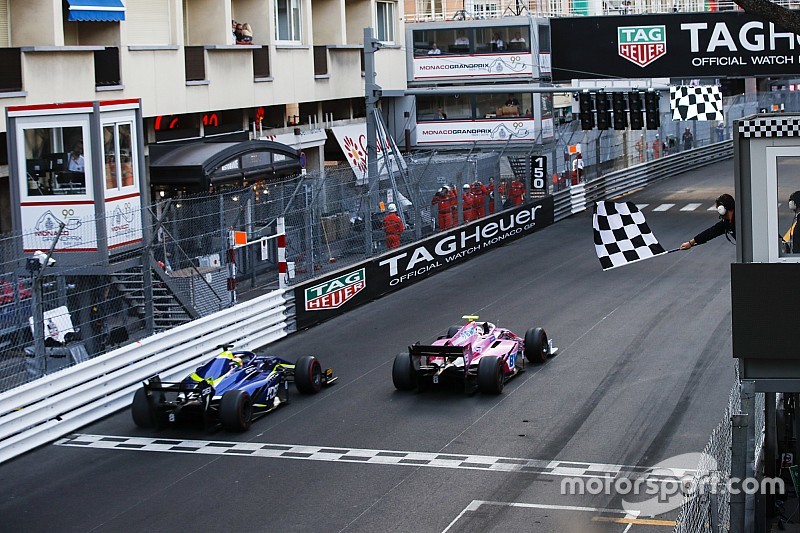 The two safety car stints occurred in the first six laps of the race, with Luca Ghiotto involved on both occasions.

Ghiotto, who finished the feature race second but was disqualified for his team using a too-thin rack stop, started the race last and had two overtaking manoeuvres attempts end in contact.

He went side by side with Tatiana Calderon at Mirabeau, leaving the latter in the wall, and then tried to dive down the inside of Mahaveer Raghunathan at the hairpin, taking himself and the Indian out as well.

Both SC stints lasted just one lap and Hubert kept the lead from fellow front-row starter Deletraz without any issues.

The gap between the duo stayed around one second but Deletraz for most of the race, with the Swiss racer only closing in for the last few laps.

Deletraz was all over Hubert at the Nouvelle Chicane and while the Frenchman locked up twice, he took the corner without cutting it on every occasion.

Hubert's win was still in doubt at the final corner as a poor exit allowed Deletraz to go side by side with the Frenchman, only for Hubert to hang on in a photo finish.

Virtuosi's Guan Yu Zhou was under pressure from Artem Markelov for the entire race but held off the Russian for the second podium of his rookie campaign, less than a second behind Hubert at the chequered flag.

Markelov's return to F2 culminated in two top-six results as he followed up his sixth place on Friday with a fourth on Saturday.

Campos Racing's Dorian Boccolacci couldn't keep up with the top four but didn't lose any places, despite being closely followed by Nobuharu Matsushita and then Sergio Sette Camara after Matsushita dropped down the order.

Sette Camara took sixth ahead of the ARTs of Nyck de Vries and Nikita Mazepin.

Matsushita missed out on points in ninth, with Nicholas Latifi settling for 10th.

Ralph Boschung's Trident stopped while running seventh, while his teammate Giuliano Alesi was hit twice by Sean Gelael in a single lap, and retired at the Nouvelle Chicane.