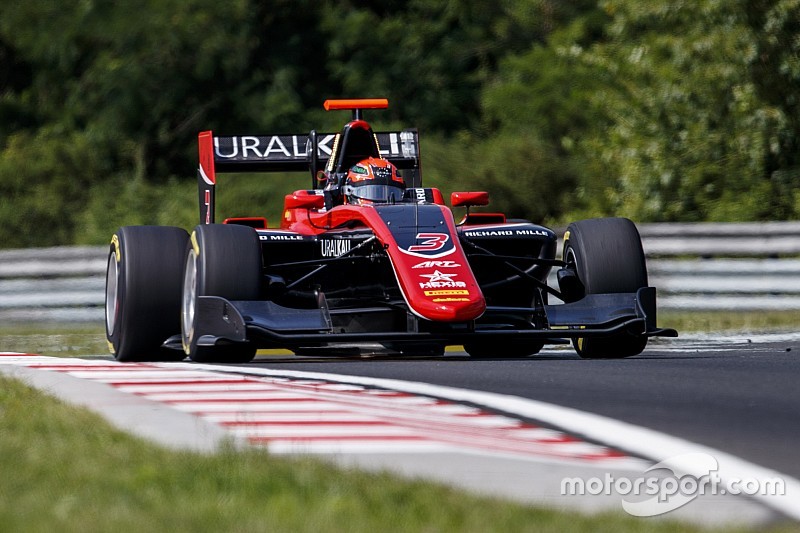 Nikita Mazepin took his first GP3 win since the season opener in the Hungaroring feature race in dominant fashion after taking the lead at the start.

Second on the grid, Mazepin had a better start than pole-sitter Anthoine Hubert and took the lead into Turn 1.

He quickly built a lead of two seconds ahead of Leonardo Pulcini, who had also passed Hubert at the start. Mazepin's lead was never in danger as he eventually won by 10.4s.

Hubert completed the podium in third as David Beckmann finished his first race for Trident in fourth, the best result of the German rookie's season so far.

Beckmann was sixth after the start but passed Jake Hughes into Turn 1 and then Callum Ilott on the main straight when the Ferrari junior ran wide out of the final corner.

After being passed by Beckmann, Hughes also came under pressure from Joey Mawson, but an overtaking attempt from the latter on the outside of Turn 1 resulted in contact.

Mawson retired a corner later and Hughes had to pit with front wing damage.

That promoted Ryan Tveter and Juan Manuel Correa into sixth and seventh respectively, and the American then pulled off a last-lap move on Ilott to end up fifth.

Dorian Boccolacci held off Diego Menchaca for eighth as Gabriel Aubry took his first point of the season in 10th, denying Tatiana Calderon with an overtake on the last lap. GP3 debutant Jannes Fittje was 13th.

Apart from Hughes and Mawson, other drivers to retire were Giuliano Alesi, who called time on his race in the pits, and Niko Kari, who stopped on track.