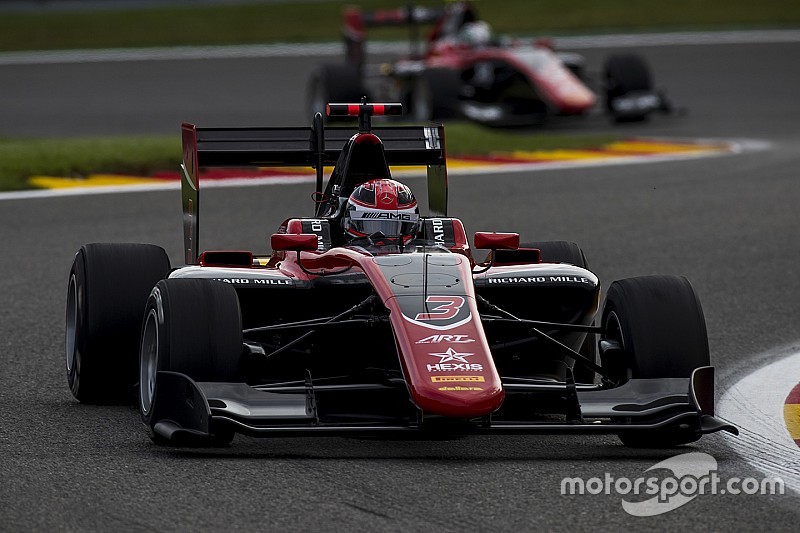 The win, Russell’s third of his rookie GP3 campaign, extends the Briton’s championship lead to 22 points over Aitken.

Arjun Maini finished fourth for Jenzer Motorsport, getting close to the battling Aitken and Fukuzumi in the closing stages.

Russell held the lead from pole at the start, but Fukuzumi made a great getaway from second to put him under pressure at the apex of La Source.

Fukuzumi then got a better run down the Kemmel Straight to seize first approaching Les Combes, as just further back Aitken dispatched Maini to move up to third in a similar move.

Honda F1 junior Fukuzumi started to edge away from his teammates but his advantage was erased when the virtual safety car was deployed after Bruno Baptista crashed into the barriers at Les Combes.

Baptista’s incident was caused by his teammate Tatiana Calderon bumping over the run-off kerbs at the chicane and clashing with the Brazilian as she returned to the track, which resulted in a 10-second penalty for the Sauber junior.

When the race resumed, Russell and Aitken were right with Fukuzumi and the former used the first of his six DRS activations to edge close to the leader on lap four of 17.

He did likewise on the run up the Kemmel Straight on the next lap and retook the lead on the approach to Les Combes, then set about immediately pulling away.

From there, Russell established a sizable gap and was able to maintain his advantage to the finish, crossing the line with a commanding 7.4s gap.

Fukuzumi put Aitken under pressure during the middle phase of the race and attacked with fresh impetus in the final laps.

He retook second with a late move around the outside of the Bus Stop chicane on lap 15.

But Aitken immediately used his own DRS to close back up on his teammate and get ahead on the Kemmel Straight, for what turned out to be the final time - because, although Fukuzumi got close on the last tour, he could not mount a final assault.

Dorian Boccolacci beat his Trident teammate Ryan Tveter to fifth, while another of the Italian squad’s drivers – Ferrari junior Giuliano Alesi – finished seventh after charging up the order in the early laps.

Julien Falchero will start race two from pole after finishing eighth ahead of Niko Kari and Kevin Jorg.

Marcos Siebert suffered what looked like a suspension failure in the closing stages, while Matthieu Vaxiviere and Anthoine Hubert, whose retirement was the only disappointment of the race for ART, also failed to finish.