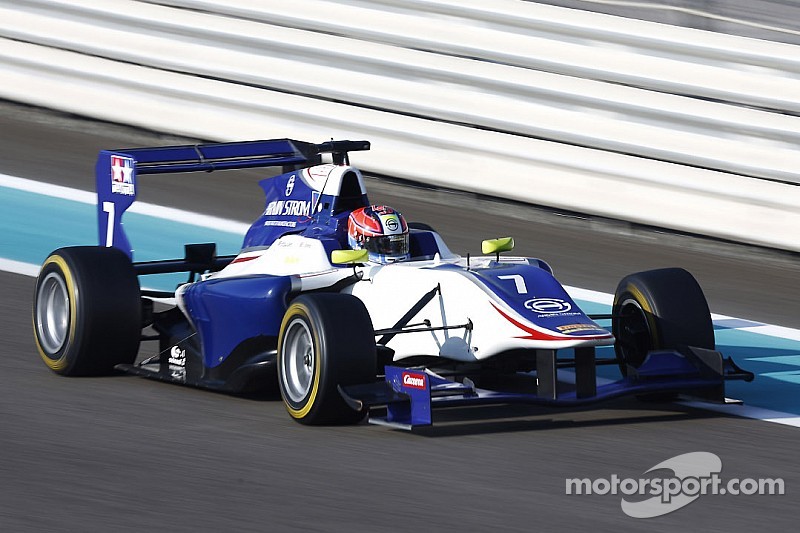 Brit Dean Stoneman continued his excellent run of form with a superb win in race one at the Yas Marina Circuit. The Koiranen GP ace got the better of pole-man Marvin Kirchhöfer (ART Grand Prix) and held on to secure victory despite pressure from the German. Dino Zamparelli joined the pair on the rostrum in third.

Kirchhöfer blitzed the opposition in qualifying yesterday to set his second pole of the season, but Stoneman was quicker away at the start and led before the first turn. Zamparelli was also on the move, making a brilliant start from fifth on the grid up to third. Newly crowned GP3 Champion Alex Lynn from Carlin lost a place at the start after running wide, with his teammate Emil Bernstorff one place ahead in fourth.

The safety car was deployed early on after Trident’s Patrick Kujala made contact with the rear of Angola born Luis Sa Silva, both drivers forced to retire with damage. The cars were towed off the circuit at Turn 12 and once the race resumed, Stoneman pulled a nice gap to Kirchhöfer to retain his lead.

Lynn was forced to stare at the back of his teammate Bernstorff’s machine after attacking his fellow compatriot early on, whilst Kirchhöfer fell into the clutches of Zamparelli after the re-start. The German found some extra pace though and lit up the timing screen to post the fastest lap of the race and pocket two extra points.

There was a titanic battle for the final point on offer with Jimmy Eriksson trying everything to pass his Koiranen GP teammate Santiago Urrutia. The Swede ran wide over the chicane on his first attempt, losing time, but made the move stick on the Uruguayan a lap later. As the laps ticked down, Kirchhöfer began to slowly reel in Stoneman and on the penultimate lap, there was just 0.8s between the leading duo.

Kirchhöfer made a very small mistake on the final lap, losing him a few tenths to the race-leader, thus at the chequered flag it was Stoneman who punched the air with delight after a fantastic win. Kirchhöfer and Zamparelli completed the podium, ahead of Bernstorff, Lynn, Alex Fontana, Patric Niederhauser, Nick Yelloly, Kevin Ceccon and Eriksson.

The GP3 crown may have gone to Lynn but there is a huge fight in the battle for runner-up. Stoneman lies in second on 163 points with Kirchhofer just two adrift. ART Grand Prix have sunk their claws into Carlin’s lead in the Teams Standings after an impressive 47 points haul in race one. The French squad who have won the teams’ trophy for four consecutive years are now just five points behind the British team with one race remaining – an epic encounter awaits…

The final race of the 2014 GP3 Series season will commence at 13.00pm local time tomorrow (GMT+4) with Nick Yelloly on reverse pole.

Niederhauser signs off in style at season-finale