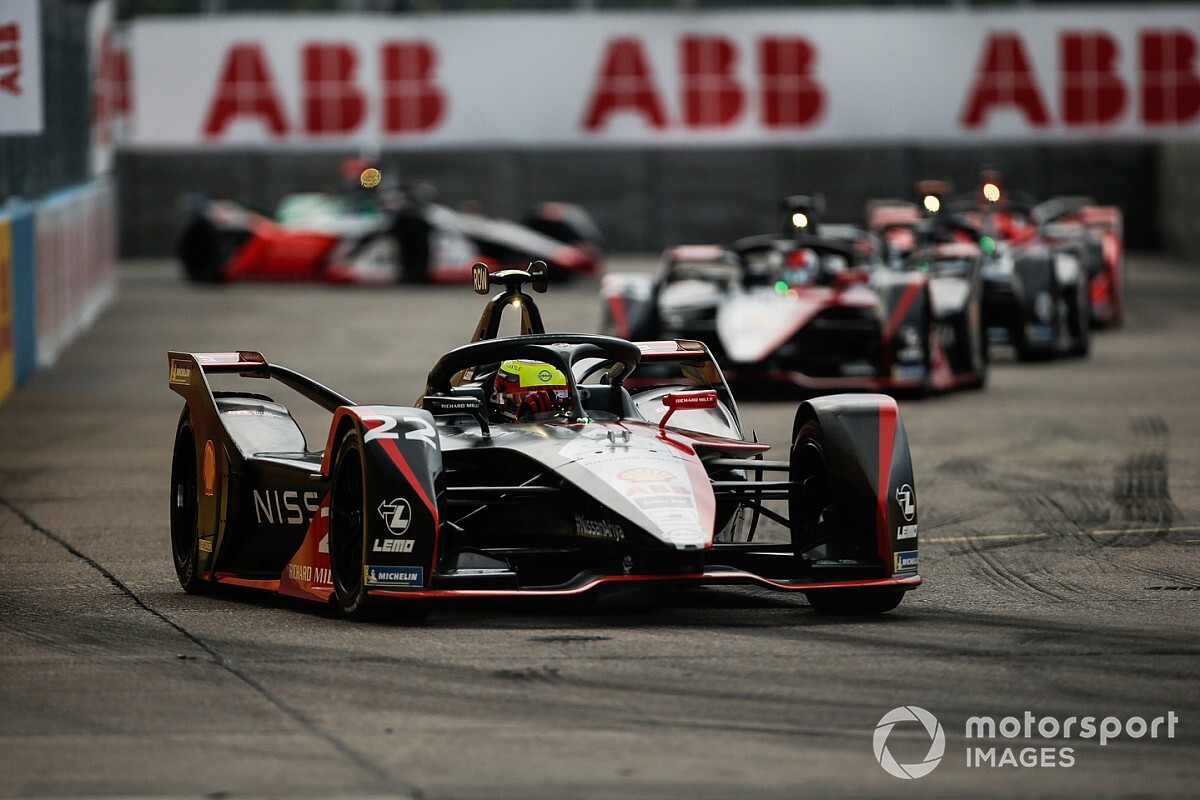 Rowland built a 1% useable energy advantage on the extended Tempelhof Airport circuit to control proceedings over Envision Virgin Racing driver Frijns. He led from lights to flag to seal a 1.9s win in a 36-lap race, even though the timing screens had to reset after scoring the classification one tour prematurely.

Frijns drew his car’s nose alongside into Turn 1 but Rowland had the inside line to lead by 0.4s at the end of the opening lap as newly-crowned champion Antonio Felix da Costa jumped from 21st to 16th after his disastrous qualifying.

With Frijns activating both of his 35kW attack mode boosts before Rowland, the Briton never dropped from first place and, with Jean-Eric Vergne failing to score points, Rowland jumped from ninth in the championship standings up to second.

Audi driver Rene Rast scored a last-ditch podium, having harried the rear of Andre Lotterer’s Porsche for much of the closing third of the race. Rast took his second and final attack mode later than Lotterer, but he failed to put it to use as he remained in fourth as the four-minute advantage ran out.

Lotterer bullied his way up the inside through the second sector and the pair remained rubbing side-by-side for a string of corners until Rast held the inside line at the Turn 15 hairpin. But Rast, who replaced Daniel Abt at the Audi team for the Berlin races, remains under investigation for the manoeuvre.

Similarly, team-mate Lucas di Grassi was handed a 5s penalty after he spun in an incident with  da Costa. The pair made progress through the field as they recovered from a group-one qualifying blunder, but as di Grassi passed into Turn 1 he cut across the DS Techeetah car’s nose and slid. Di Grassi was given the blame and classified 21st, while a late car failure dropped da Costa from the points down to 22nd.

Alex Lynn took his Mahindra Racing machine to sixth, after an enduring battle with third-starting Neel Jani. The Porsche driver, who is expected to be replaced next season by Pascal Wehrlein, had been a strong but distant third until he lost out through the attack mode cycles and fell to sixth – but still enough for the team’s best FE combined finish in its debut season.

A strong recovery and two late uses of attack mode allowed Mitch Evans into seventh for Jaguar ahead of the Venturi Racing car of Edoardo Mortara. Stoffel Vandoorne edged ninth for Mercedes after a late deployment of his fanboost relegated Sebastien Buemi – stablemate to Rowland – down to 10th.

Behind Alexander Sims, Jaguar stand-in Tom Blomqvist looked set for a points finish on his series return until a late collapse dropped him to 12th.

A drive-through penalty for Vergne for an over-cooled battery on the grid meant he wound up 18th in DS Techeetah’s second non-score of the season.