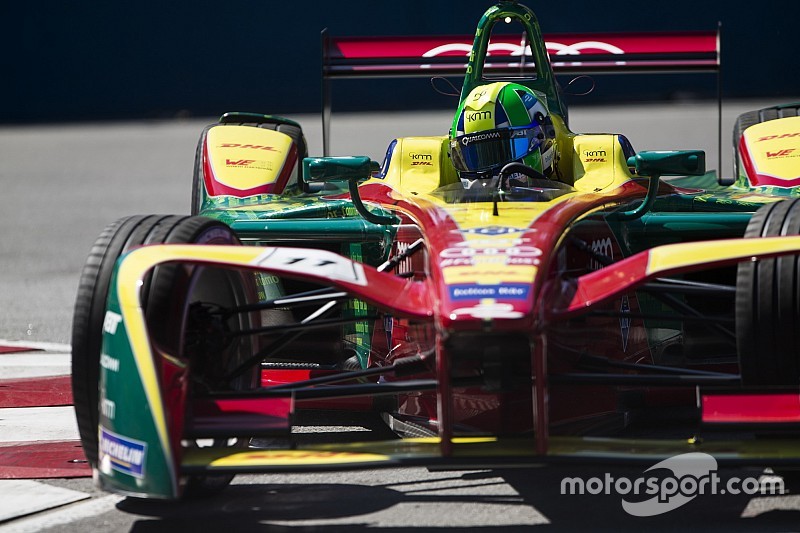 The Brazilian set a time of 1m09.404s in his ABT Schaeffler FE02 car to head Jean-Eric Vergne, who looked as if he would take the top spot in the final moments of the session.

The French driver’s front-row start makes up for a litany of errors from his Techeetah team during the first two races of the season, as he converted his Renault powertrain’s pace into a time just 0.194s slower than di Grassi.

“It is a great moment and not something I expected,” said di Grassi afterwards. “It is important after the first two races to get pole here, almost on home ground for me.”

Championship leader Sebastien Buemi lost time in the first sector of his Super Pole lap by locking his brakes. The Swiss ultimately paid the price, and slipped behind di Grassi and Vergne to start third.

The NEXTEV N10 pair of Oliver Turvey and Nelson Piquet start fourth and fifth. Both lost significant time on their Super Pole laps with major lock-ups at Turns 7 and 1 respectively.

Nicolas Prost was the fastest qualifier who didn’t make the Super Pole session, and so starts sixth in his Renault e.dams entry.

Evans topped his qualifying group with a 1m09.505s lap in the Jaguar I-Type 1, securing the British marque's best ever starting position of seventh. Teammate Adam Carroll starts from 15th position.

Last year's Buenos Aires ePrix victor Sam Bird had a self-confessed ‘scrappy lap’ due to his DS Virgin car struggling to achieve optimum grip levels, and could no do better than 10th.

There was disappointment for Bird’s teammate Jose Maria Lopez, who tagged the Turn 5 wall during his group qualifying lap.

It was a bitter pill to swallow for the local man, as he was in line to make it in to Super Pole after setting the fastest overall sector one time. The incident necessitated the only red flag of the group sessions and anchored the Argentinian to a lowly 18th.

Antonio Felix da Costa’s wretched day continued as he damaged the front right of his Andretti ATEC-02 before he had even started his qualifying lap. The Portuguese starts from 17th on the grid.

Maro Engel meanwhile failed to complete his qualifying lap after losing power in his Venturi VM200-FE-02 and stopping on the track, meaning he brings up the rear of the 20-car field.