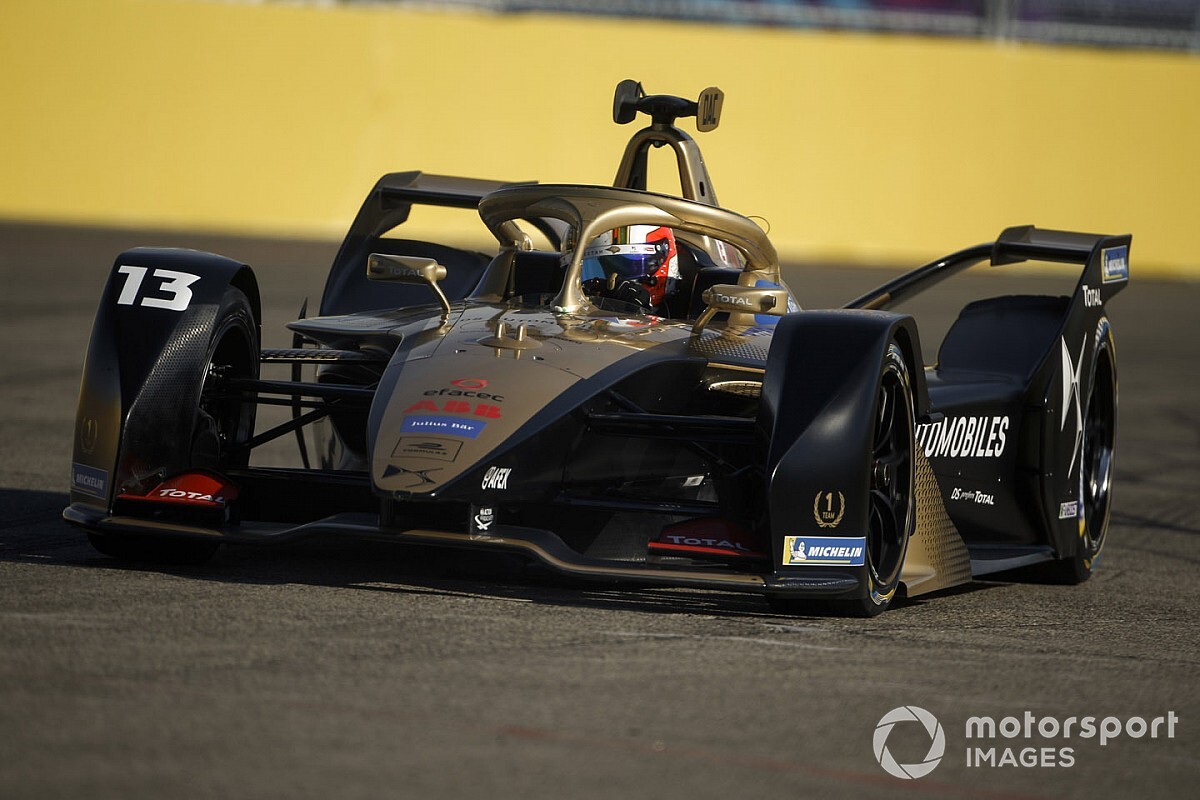 Antonio Felix da Costa claimed pole position for the second Berlin race by over 0.4 seconds as his domination of the Formula E season finale continued while his title rivals faltered.

The points leader posted the fastest time of the reversed Tempelhof Airport circuit with a 1min06.442s to leave superpole rival Sebastien Buemi with little response in second.

DS Techeetah pilot da Costa blitzed the group one session and was the only driver of the first six to survive for the pole position shootout.

Prior to his lap, Alex Lynn and Nyck de Vries were separated by just 0.002s in superpole.

Despite narrowly missing the Turn 1 apex, da Costa found 0.2s in both the first and final sector to have a huge 0.477s cushion at the top of the field.

Buemi progressively lost time on his flier for Nissan e.dams - 0.15s in the first split, 0.2s in the second - to win up a comparatively large 0.417s in arrears.

Lynn, who snared 2017 New York pole on his FE debut for Virgin Racing, was an excellent third on only his second appearance for Mahindra Racing.

De Vries will line up fourth, ahead of Envision Virgin Racing’s Robin Frijns, after he improved on the sturdy but unremarkable effort from Lucas di Grassi.

Buemi’s teammate Oliver Rowland was the first driver to miss out on the top-six shootout after Lynn’s immense final group flying lap.

Combined with Frijn’s stellar group three run, which assured him of a best qualifying result of the season, it shuffled defending champion Vergne out of superpole contention in eighth.

Da Costa once again left his group one and title rivals stunned, as Sam Bird - who had finished the early running in second place - would end the group stages down in ninth.

Much of the group one deficit was expected to be eradicated by the increased levels of rubber laid down on the abrasive Tempelhof Airport circuit, but it proved otherwise.

Behind Venturi driver Edoardo Mortara, 11th was the return for Maximilian Gunther (who slipped from fourth to fifth in the points after the Wednesday race), and Andre Lotterer - second in the first race - could only land 12th.

Stoffel Vandoorne, the first driver to set a full power 250kW run, was well off his Mercedes stablemate de Vries down in 13th.

A downbeat Alex Sims could only manage 15th, with his woes compounded by a 20-place grid drop for a battery change following damaged caused by his BMW Andretti team.

Oliver Turvey delivered a great effort in 16th for the struggling NIO 333 team, which put the Briton ahead of both Jaguar drivers.

Mitch Evans, da Costa’s closest threat in the points but now 44 points adrift, could only qualify his car in 17th having also brought up the rear in the group one stage.

Double DTM champion Rene Rast had to watch teammate di Grassi spearhead the superpole charge for Audi after a sector one mistake put him 1.4s off the pace and last.