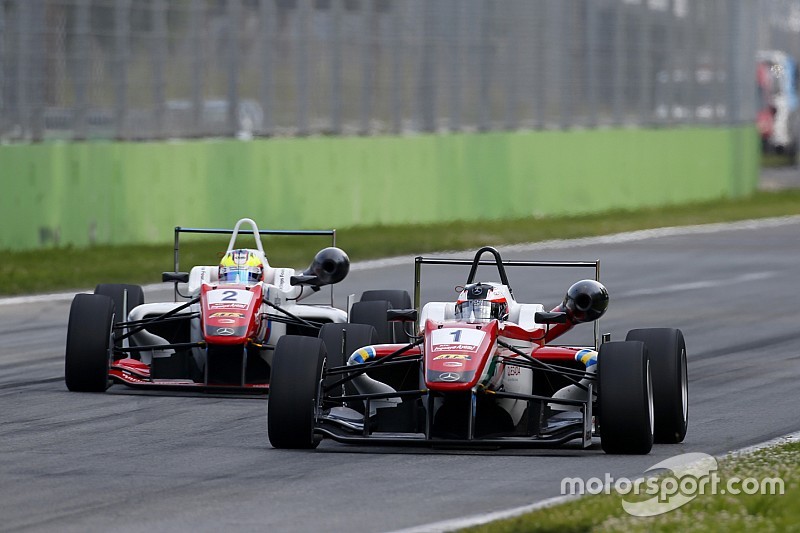 Felix Rosenqvist took a third win from as many European Formula 3 races at Monza in a red-flagged finale that ended in bizarre circumstances.

Only 8 of the scheduled 19 laps were completed, ostensibly because of the race officials’ displeasure with driving standards throughout the field after two crash-filled races on Saturday.

An early Safety Car was deployed on the second lap when Ryan Tveter launched over the rear of Fabian Schiller at the first chicane at the start, the field given one more chance to behave themselves thereafter.

And sure enough, when Mikkel Jensen ended up in the gravel after contact with Lance Stroll at the chicane, the ensuing caution period metamorphosed into a race stoppage after a few laps of circulating behind the Safety Car.

With less than 75 percent race distance completed, Rosenqvist – who led from start to finish – picked up half-points for his fifth win of the season for the second time in succession, as the results from Saturday’s second race were later revised and half-points also awarded.

Jake Dennis provided the only real action of the race up front, beating Antonio Giovinazzi to the first corner for third before executing a superb outside pass on Charles Leclerc at the Roggia chicane to secure second behind Prema stablemate Rosenqvist.

Leclerc held on from Giovinazzi to complete the podium, with Brandon Maisano taking fifth at the expense of Gustavo Menezes after a spirited scrap with the American, who was promoted to fifth in the race two results by way of countback.

George Russell battled his way up to seventh ahead of Santino Ferrucci, with Stroll – unharmed after his enormous race two crash – and Maximilian Gunther completing the top 10.

Giovinazzi continues to lead the way in the drivers’ standings on 182 points, with Leclerc his nearest challenger on 165.5 and Rosenqvist firmly in the hunt after his triple victory on 160.