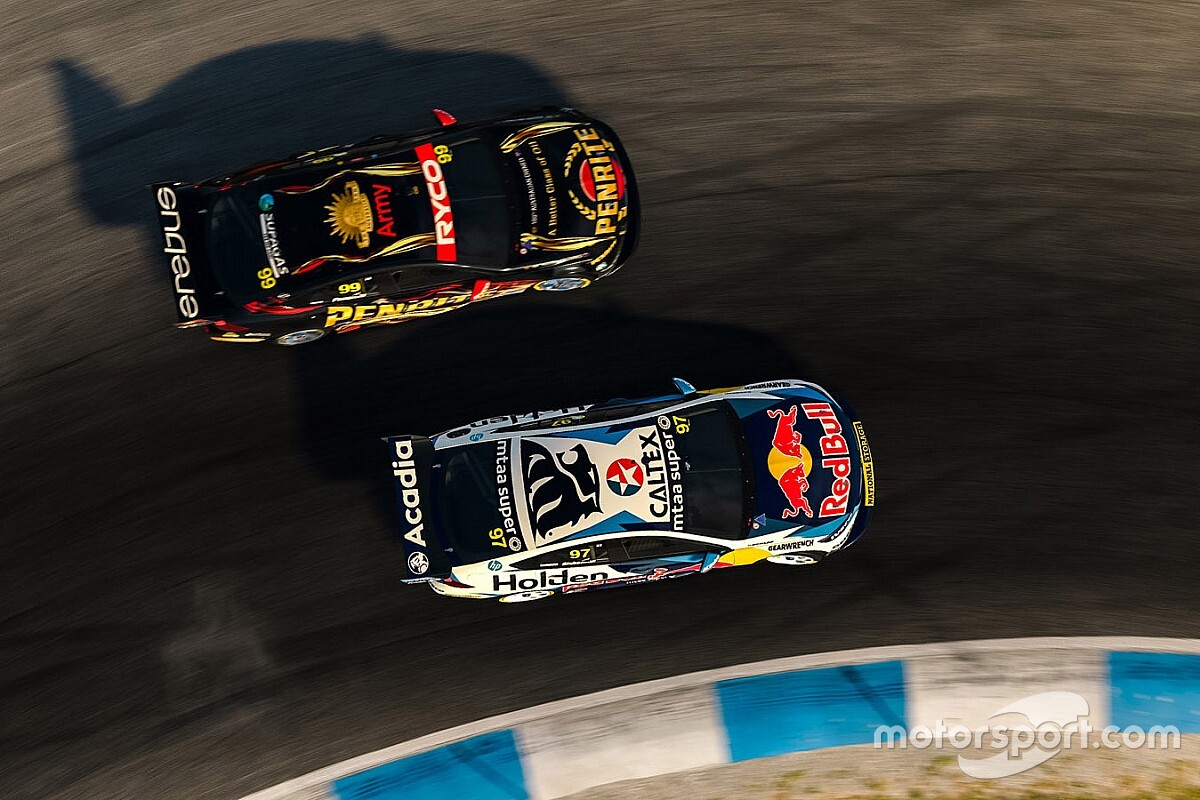 Check out some of our favourite bits of banter between the Supercars aces from the eighth round of the category's Eseries.

Once again, a variety of Twitch streams and the central radio channel linking all drivers provided some brilliant behind-the-scenes insight into the official virtual Supercars series.

Here are some of our highlights.

Shane van Gisbergen gets a close look at the back of McLaughlin's Mustang during Phillip Island practice.

"That looks like it's got the illegal rear wing..."

Bryce Fullwood, Fabian Coulthard and Andre Heimgartner discuss their nasty tangle at Honda on the second lap of Race 1.

BF: "Sorry Andre, that wasn't me. I don't know what happened there."
FC: "I got tagged in the sweeper and had nowhere to go but the grass."
BF: "Ah, copy."
AH: "Smooth as always, everyone."
FC: "I think it was Hazelwood that started all that."

Will Davison not overly impressed with fan wildcard (and experienced sim racer) Fawzan El-Nabi in Race 1.

"Old mate in that Mustang, show some respect dude. That was pretty dumb. What are you doing brother?"

JLB: "Yeah copy mate. What is it, eight laps? I might even go now, if these guys don't go."
Fullwood: "Thanks Jack."
JLB: "You're welcome bro. Do you want to go this lap too, Brycey?

McLaughlin and spotter Richard Harris take a philosophical view to being taken out by El-Nabi in the first race.

"I'm doing pretty well to keep my head right now. Because I'm about to flip out."

Andre Heimgartner sinks one from the three-point line with a call-back to his shunt with James Courtney on the Gold Coast last year?

Scott Pye: "You just turned in on me JC, what the hell?"
AH: "Probably didn't have enough overlap."

Nick Percat gets not one, but two apologies early in the first Brazil race.

And then a few corners later...

Mark Winterbottom with some choice words for race control after being hit by Jake Kostecki at Interlagos.

"You gave me a 55 second penalty last week. You guys better do something about that s**t."

Coulthard and Percat share a chuckle after being caught up in a Lap 1 pile-up in the final race.

FC: "Let's have the smouldering engine race back to the pits, Percat."
NP: "You've passed me. How is yours faster?"
FC: "That's my traction control, mate."

Paul Morris, spotting for Anton De Pasquale, has his say on the melee after the Erebus Holden is almost taken out by Lee Holdsworth.

Davison fails to see the funny side too.

WD: "I actually find it humorous how bad some of you guys are after seven bloody weeks. It ain't that hard to just not crash."
Coulthard: "Yeah it's pretty embarrassing, Will."
Percat: "Hey Will, can you tell everyone what you really think now?"

Scott Pye gets served by Zane Goddard into Turn 1 late in the finale.

"Goddard what the f**k, man?" Frosty was even letting us go and you still can't do a move."