In the wild and unpredictable GRAND-AM Continental Tire Series Street Tuner division, nothing comes easy. With two of its three cars in contention for the 2013 ST Championship, the veteran BimmerWorld Racing team heads to Connecticut’s Lime Rock Park this weekend for a season finale that, based on recent experience, could be another roll of the dice to determine which team comes out on top.

BimmerWorld’s Gregory Liefooghe and Tyler Cooke, who share the No. 81 BMW 328i, sit third in the ST standings and have every intention of reducing the 18-point gap to the Championship leaders. But with GRAND-AM’s restrictive points system, it will take a drive of epic proportions by the No. 81 (and some misfortune for the drivers in first and second place) to happen.

The same is true for Seth Thomas and Dan Rogers, drivers of the No. 82 CRC BRAKLEEN® BimmerWorld BMW 328i, who are tied for fourth in the standings. They will give everything they have to leapfrog the competition, but once again, it won’t be easy because that’s just not how the ST class works. 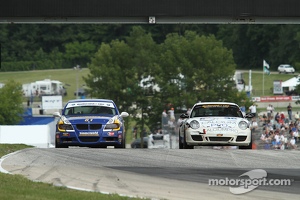 BimmerWorld also holds third and is tied for fourth in the Teams’ Championship, and has been a heavy contributor to BMW’s move into the lead for the Manufacturers’ Championship. Along with the third BMW 328i entry for Greg Strelzoff and Connor Bloum in the No. 80, the Lime Rock finale also presents BimmerWorld with the final in-race opportunity to develop its brand-new BMW F30 chassis it intends to campaign next season.

Asked if there were any special instructions or strategies to try and move the No. 81 and 82 into a title-winning position, team owner/driver James Clay says having each entry focused on maximizing its potential—the team’s standard practice—will ensure the best possible results.

“With four total cars in the field and a cohesive group of drivers under the BimmerWorld awning, we tend to be able to work together for a better combined result and that will certainly be important this weekend,” he explained. “Past that, I think the racing world is a little tired of team orders. Our cars got where they are with good hard work, and they will need to do more of the same.”

Lime Rock’s short, twisty circuit doesn’t necessarily amplify the BimmerWorld BMW’s natural handling and braking advantages, but also won’t act as a hindrance as some tracks have done this season.

“I don't think this weekend's venue helps or hurts us in the final Championship battle,” Clay added. “We have been strong and we have won at Lime Rock in years past, and it would be sweet to clinch the title for BMW at their home track.

With so much of the team’s focus on completing the ST championship, the progress of BimmerWorld’s F30 platform has been intentionally under reported, but Clay says the lighter, turbocharged 3-Series model is making strides with each outing.

“At our last race in Monterey, I really saw the potential of the new BimmerWorld F30 car come out,” he said. “It has been a solid car, but we have been struggling for the final bits of speed. We have been doing a lot of testing and the Series adjusted the boost level last week based on the results, and I feel we should be more in the hunt this weekend. Without question, once the power of the car is on par, we will have a great piece of equipment for the future.”

The last race of the season is also a place where many new driver and team combinations begin to take shape, and with BimmerWorld’s reputation for consistency from year to year, Clay expects a limited number of changes to the team’s ST roster in 2014.

“We have been ahead of the curve this year as a team and we have already laid a solid framework for another strong season in 2014,” he noted. “I think we will go into October with an opportunity for 1-2 new drivers, and I expect to wrap those up and continue into winter testing so we can stay ahead into next season.”

Ceres, teams prepare for "King of the Hill"