No. 13 Rum Bum Racing Porsche 997 took the checkered flag on fumes after 2.5-hours of hard racing.

Elkhart Lake, Wis. - With a healthy lead in the GRAND-AM Continental Tire Sports Car Challenge championship standings, some teams might be content to just cruise to a race finish. But ever since scoring a win in the team’s very first race, people have come to expect the unexpected from Rum Bum Racing.

With Joe Varde calling a bold pit strategy, drivers Matt Plumb and Nick Longhi combined to score a 14th win for Rum Bum Racing with a dramatic victory at Road America on Saturday as the No. 13 Rum Bum Racing Porsche 997 took the checkered flag on fumes after 2.5-hours of hard racing. 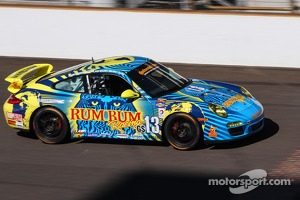 The victory, which came with team owner Luis and Jennifer Bacardi on hand as well as a large group of vocal Rum Bum Racing supporters, moved the team into an even stronger position in the GRAND-AM championship as the team looks to make a successful defense of its 2012 championship title.

Longhi opened the race from seventh on the 51-car combined class grid with the goal of running a conservative stint and handing the car over to Plumb in prime race condition. And he accomplished just that as he kept the No. 13 Rum Bum Racing Porsche in the top-10 during his 30-minute run before handing the car over to Plumb as the team took advantage of the second full course caution of the race to bring the car to pit lane as the race reached the 30-minute mark.

“My strategy was to be very careful – it was a little hectic in terms of traffic because there was some banging and beating going on,” said Longhi of the opening stint. “The first restart was pretty wild. Somebody checked up and everybody ran into each other but I was just really, really trying to stay out of it.

There’s not a scratch on the car and I’m pretty happy about that – that was the goal, not to damage the car at any cost. I knew right away that we had a pretty good car and if we could keep it together and get to the end, it would be good.”

Plumb took control of the No. 13 Rum Bum Porsche that the team built and won on debut at Mid-Ohio and restarted 10th in line. He wasted no time in moving forward as he worked his way into the seventh position. He would continue to make forward progress through the field into the top-five until he was called to pit lane for the team’s second and final pit stop.

As the No. 13 Porsche emerged from pit lane sixth and with 1 hour and 12 minutes still remaining in the race following the stop, the Rum Bum squad hoped for another caution period. But when one never came, Plumb was asked to continually conserve fuel in order to make it to the finish.

With the tension ratcheting up with each successive lap, several cars peeled down pit lane for a splash of fuel, but crew chief Joe Varde made the call to keep the No. 13 Porsche on track and when the leading car took to pit lane for its splash of fuel, Plumb inherited the race lead.

With the many Rum Bum Racing fans in attendance holding their breaths, the Rum Bum engineers watched the fuel numbers from the pit box and the call was made not to take the extra stop for fuel. Plumb had masterfully met the fuel numbers the team had called for as he took over the lead for the final three laps of the race to take the victory.

“I was very nervous - the whole time we knew we were going to conserve and try to do a really long run there,” said Plumb. “On the restarts we just took it easy. I knew if it stayed green the whole time it was going to be tight. So we just kept playing it conservative and I just ran it as far as I could until the bobble and I kept backing myself up and a new car would be catching me and then they’d drop off to the pits for fuel and then I’d conserve more.

We got lucky, but when you have this much luck it says something about the people who are making the calls. Joe (Varde) was on me to conserve, conserve, conserve. I have such good faith in Joe and (engineer) Ed Semf and John Terry who were running the numbers. To do this in front of Jennifer Bacardi’s hometown crowd - this is what we work so hard to do. It’s one thing when you win in front of a bunch of strangers but when you win in front of the boss, his wife and a whole bunch of friends it makes it that much more worth it.”

“There was nothing I could do from the pit box and so I was just hoping it would work out,” offered Longhi of the final laps. “It was well-planned, well-executed, and the combination of a lot of things all coming together. I’m very happy for everybody. Clearly the team did a fantastic job – preparing the car, figuring out the fuel and our strategy.

All these pieces came together and when the luck comes your way, you have to be in a position to take advantage of it and that’s what happened today. I’m extremely happy for Luis and Jennifer Bacardi and everybody here celebrating with us.”