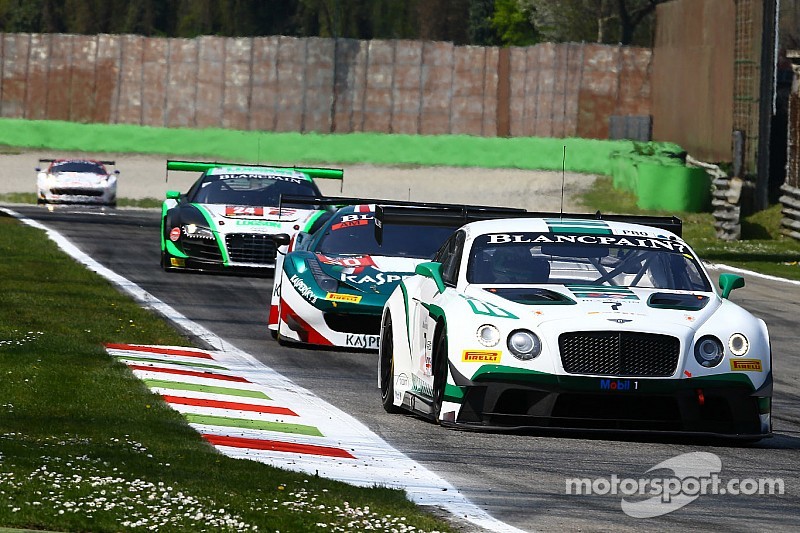 The Circuit of Silverstone, Home of British Motorsport, will host the fourth round of the 2015 Blancpain GT Series. Last year, the Bentley Continental GT3 of Team M-Sport Bentley took an historic and very popular maiden win. In 2015 there will be plenty at stake in all three classes. Not surprising, considering the fact that the number of cars on the Silverstone entry list will pass the cap of 60 cars for the first time in history.

Who will be the new leader?

Maxime Martin and Dirk Müller after the opening round in Nogaro, Norbert Siedler after Monza, Laurens Vanthoor and Robin Frijns after Brands Hatch: after each round of the 2015 Blancpain GT Series the leadership in the drivers’ standings has changed. The Belgo-Dutch pairing has a nine point advantage over fellow Belgian Audi Club Team WRT-driver Stéphane Ortelli, with the Monegasque being the only driver inside the top-5 of the standings that has scored points at each of the three rounds.

The chances are that the standings will again be reshuffled after the fourth event of the 2015 Blancpain GT Series, the Silverstone endurance round. Frijns and Vanthoor (together with Jean-Karl Vernay) and Ortelli (together with Stéphane Richelmi and Frank Stippler) will be at the wheel of the two Belgian Audi Club Team WRT machines taking on the 23 other cars in the Pro Cup.

Notable newcomers in the category are the #333 Rinaldi Racing Ferrari, which moves up from the Pro-Am Cup, with Marco Seefried joining Monza race-winners Norbert Siedler and Rinat Salikhov. BMW Sports Trophy Team Schubert makes its first appearance this season, with Dominik Baumann and Maximilian Sandritter at the wheel of the #120 BMW Z4.

The British fans will certainly cheer on the 2014 winners, Bentley Team M-Sport. Steven Kane, Guy Smith and Andy Meyrick will do their utmost to give their fans an encore.

In the Pro-Am Cup the Ferrari teams dominated the first round of the Blancpain Endurance Series in Monza. And although the Italian brand is still the best represented at the second three-hour race of 2015 (10 out of the 23 Pro-Am Cup cars are a Ferrari 458 Italia), the competition will certainly want to put an end to the Ferrari prevalence.

The British teams have the highest number of representatives in the Pro-Am Cup and the local specialists – in one Aston Martin, two BMW’s and one Nissan - will want to shine in front of their home fans. There is no shortage of British drivers in Pro-Am either: fifteen drivers will wear the Union Jack in Silverstone, with James Nash and Jann Mardenborough being the latest addition. Nash will share the #2 Belgian Audi Club Team WRT R8 LMS ultra with French GT-drivers Philippe Gaillard and David Hallyday, while Mardenborough gets behind the wheel of the #22 Nissan GT Academy Team RJN GT-R Nismo.

Exceptions to the rule

In the last ten races of the Blancpain Endurance Series the Am Cup (formerly known as the Gentlemen Trophy) has been won eight times by drivers at the wheel of a Ferrari. One of those two exceptions came in the 2013 race in Silverstone, with the Porsche of Ahmad Al Harthy and Miroslav Konopka crossing the line in first position.

Judging by the results of the Monza round one month ago – Ferrari drivers occupying all three steps of the rostrum – another exception to the rule seems unlikely. The most likely candidate to oppose the prancing horses is the #24 Audi of Team Parker Racing, fourth in Monza and in the 2014 Nürburgring round the last non-Ferrari car to take the class win.

Guy Smith (#7 Bentley M-Sport Continental): ‘Silverstone is a special weekend for Bentley and for myself, since it is our home race. Last year, we had a dream result, taking Bentley’s first win with a GT3 car. Obviously, we would like to emulate that result, but we know this championship is strong and it will be difficult to do so. But we are certainly looking forward to the challenge.”

Stuart Leonard (#32 Leonard Motorsport AMR Aston Martin): “With its high speed corners Silverstone is a great circuit, for these cars in particular. It is really lovely to drive. I expect a fierce battle, but that is the case at every Blancpain Endurance Series race.”

Rob Bell (#58 Von Ryan Racing McLaren): “As a British driver, driving for McLaren, I am very much looking forward to going to Silverstone. Not only because we will have family there, and friends and colleagues, but also because we have tested there and the car seems to be working well in Silverstone.”

Ian Loggie (#24 Team Parker Racing Audi): “Silverstone is a fabulous circuit and is hosting one of the best motorsport series in the world, An excellent combination and opportunity to be part of what should be a great race. As it’s our home track we need to take advantage of this to score maximum points and create some serious pressure on the others.”