IMSA signed new agreements with the U.S. Department of Energy, the U.S. Environmental Protection Agency and the Society of Automotive Engineers (SAE) International in January just prior to the Rolex 24 At Daytona. 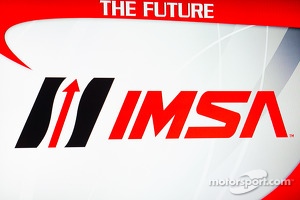 “Both Dynamic Fuels and INEOS are [derived from] waste products,” Mike Carr, Principal Deputy Assistant Secretary of Energy Efficiency and Renewable Energy, U.S. Department of Energy, said at a media gathering Friday. “It is the ultimate in… efficient technologies to take these waste products and turn them into fuels that can limit our dependence on foreign oil [and] make for a greener future for all of us. We’re absolutely thrilled to see the technology being demonstrated out here. We look forward to continuing to expand this partnership and move forward. I think that the message to the public at large is, ‘These technologies have arrived.’”

IMSA signed new agreements with the U.S. Department of Energy, the U.S. Environmental Protection Agency and the Society of Automotive Engineers (SAE) International in January just prior to the Rolex 24 At Daytona.

“Alongside our partners at DOE, IMSA and SAE, Green Racing has and continues to promote the development and use of alternative technologies and renewable fuels,” said Heather McTeer Toney, Administrator, Region IV, U.S. Environmental Protection Agency. “It’s an interactive platform for communities to recognize that we are constantly employing new and innovative technologies that will not only help improve air quality but also improve fuel efficiency and save money in driveways and on highways across America.

“Green Racing advances technologies from the raceway to the driveway, and it brings cleaner cars and fuels to the communities where we live, we learn, we work and we play.”

The IMSA Green platform is the evolution of a partnership that began in 2008 between the SAE, DOE, EPA and the American Le Mans Series presented by Tequila Patrón – which merged with the GRAND-AM Rolex Sports Car Series following the 2013 season to form the TUDOR Championship. A centerpiece to the partnership is the IMSA Green Challenge, which recognizes the most clean, fast and efficient GT Le Mans (GTLM) competitor in each TUDOR Championship race.

“It speaks volumes that we have the leadership of the U.S. Department of Energy and the U.S. Environmental Protection Agency at Sebring International Raceway putting their support behind what we’re doing,” said Scott Atherton, president and chief operating officer, IMSA. “IMSA’s embrace of alternative fuels falls completely in line with the Department of Energy and the Environmental Protection Agency’s bigger initiatives. The fact that IMSA uses these fuels in such a high-profile, high-performance way provides them with a testament to the quality and practicality of alternative fuels.”

Steve Burns, President, VP Racing Fuels: “This initiative is not just something to be politically correct or have something to say. It’s important specifically to advance the technology of renewable fuels. It’s about America being and staying energy independent. IMSA is in a very unique position, probably in all of racing. It’s where the factories race and where they develop their technologies. The Department of Energy does the long-term work. The auto manufacturers will develop the technology for these new generations of fuels and VP produces different versions of these new fuels. IMSA racing and its partners make Green Racing real.”

Dan Cummings, President, INEOS New Planet BioEnergy: “The great story is the biofuel itself is made less than 80 miles from here. It’s made from waste material. It’s a brand new technology which is making cellulosic biofuels. We employ a lot of people from the Florida clean energy market now, so we’re proud to bring this new technology and this fuel to the IMSA race series and be partners with both the EPA and the DOE in the Green Racing series.”

Jim Campbell, U.S. Vice President of Performance Vehicles and Motorsports, Chevrolet: “When we work with sanctioning bodies, we look for three things: We want to race relevant technologies, we want to really connect what we race on the track to what we sell in the showrooms in terms of the vehicles and the engines, and we also want the sanctioning body to run on a biofuel. We were the first team in the GT category [in ALMS in 2008] to really adopt E85 ethanol. Chevrolet Corvettes won three manufacturers’ championships and three team championships running on cellulosic ethanol.”

John Doonan, Director, Mazda Motorsports Mazda North American Operations: “At Mazda, we are typically taking a road less traveled and challenging ourselves to be different. We did it for decades with our rotary engine technology, and as we brought the newest technology for us – SKYACTIV Technology – it was a new approach. It was about efficiency, both in chassis and body platforms, engines and transmissions. One of those was the SKYACTIV Diesel technology. We chose to bring that because it is different. We knew that IMSA and the TUDOR United SportsCar Championship provided us a chance to showcase that. We’re grateful that the teams at the different government entities have put their stamp on this type of racing and allowed us to tell this story to a broader audience.”

BMW drivers finish on the podium in CTSCC race at Sebring

Renault in talks with FIA over Alonso 2020 F1 test