Much like the “NF Heroes” the foundation supports, three scrappy Porsche GTD teams overcame hardships to complete the Rolex 24 at Daytona

All three Porsche 911 GT America teams racing in support of the Children’s Tumor Foundation’s (CTF) Racing4Research program at this past weekend’s Rolex 24 At Daytona persevered through a slew of endurance racing setbacks and, like the amazing “NF Heroes” they race to support, never gave up in meeting their goal of finishing America’s premier 24-hour race. 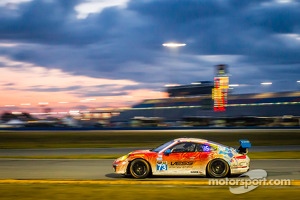 The Children's Tumor Foundation (CTF) is a not-for-profit organization dedicated to finding effective treatments for the millions of people worldwide living with neurofibromatosis – known simply as NF – that is a common yet under-recognized genetic disorder that causes tumors to grow on nerves throughout the body. NF affects one in every 3,000 people, more than cystic fibrosis, Duchenne muscular dystrophy, and Huntington’s disease combined. The CTF funds critical research into neurofibromatosis. In addition to benefiting those who live with NF, this research is shedding new light on several forms of cancer, brain tumors, bone abnormalities, and learning disabilities, ultimately benefiting the broader community.

The CTF’s unique Racing4Research (R4R) program raises funds and awareness for NF research through a diverse racing program that is annually highlighted by the Rolex 24 at Daytona effort. Donations to CTF Racing4Research can be made directly at www.Racing4Research.org.

“This is my first 24 hour race and to do it together with Children’s Tumor Foundation made it that much more special to kind of give us some extra motivation,” De Phillippi said. “The more I learned about the Foundation and the stories behind these kids who fight day in and day out to make it to the next day and to keep improving their health. They never really give up, and it really parlays into racing. I saw throughout the whole 24 hours. We had the bumper ripped off twice, the tires going flat and problems, but we battled through it. We are always looking forward to reaching the next goal. And that translates into what the Foundation is trying to accomplish and help all of these young kids try to accomplish for their own lives. I think that was really special for all of us.”

Aptly named for their courage in battling the disorder, “NF Heroes” are the brave young people that show up in full force every year with their families to cheer their teams to the finish line.

“Saturday, as usual with Daytona, was a really busy day, but in a good way because we got to see all of our ‘NF Heroes’ and families again,” Lindsey said. “Honestly, that was the highlight of the 24 hours for a lot of us and we have been looking forward to it for months. It was fantastic, and it was a great way to kick off the race weekend.”

Park Place doubled up on its CTF/R4R support for the second consecutive year and the team’s No. 71 entry survived to finish 23rd with full-season teammates Dr. Jim Norman and Craig Stanton who were joined by Norbert Siedler and factory Porsche driver Timo Bernhard.

“The race started really terrific for us,” said Lindsey, who is also a Park Place team principal. "Obviously, our Park Place cars were very fast. A sequence of unlucky events just hindered our progress, and we had to overcome one thing after another. We killed a lot of the front body work, and we had to replace a lot of front splitters. But our crew never stopped, they kept replacing and we kept fighting. It’s important that we honor our ‘NF Heroes’ by continuing to fight on like we know they do every day.”

The final R4R/CTF finisher was the No. 27 Dempsey Racing Porsche 911 GT America of driver/actor Patrick Dempsey, full-season co-driver Andrew Davis, Joe Foster and another factory Porsche stalwart Marc Lieb. The Dempsey squad had to overcome a three-hour repair job in the garage but made it to the finish just behind the No. 71 in 24th place.

Other teams that raced in support of CTF before being forced out of the Rolex 24 included the GTD No. 32 GMG Racing Audi R8 LMS and the powerhouse pairing of the No. 01 and No. 02 Chip Ganassi Racing Telcel/Target Riley Ford EcoBoost Prototypes.

The Continental Tire Challenge competitors also experienced some highs and lows. The No. 76 GS (Grand Sport) class Subaru WRX STi of Ryan Winchester and Ray Mason scored a strong, lead-lap finish of 17th while the No. 75 ST (Street Tuner) Honda Civic Si of longtime CTF supporter Ryan Eversley and co-driver Kyle Gimple unfortunately came up short and was not running at the finish.