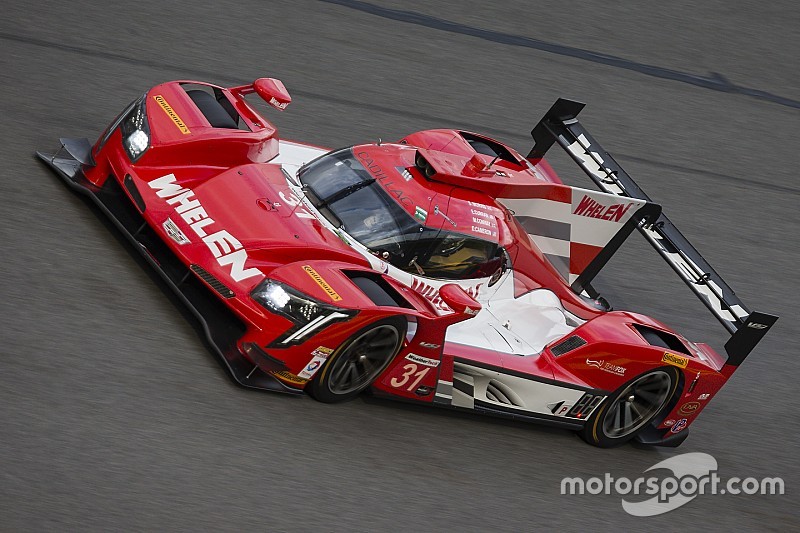 Cadillac and Ford lead the two pro classes in the 55th Running of the Rolex 24 Hours at Daytona, while a Ferrari heads GTD.

Polesitter Joao Barbosa took the lead at the start in his Cadillac DPi-V.R, ahead of Action Express Racing teammate Dane Cameron. Neel Jani initially held onto third for Rebellion Racing, but Ricky Taylor took only a couple of laps to move his Wayne Taylor Racing entry ahead to make a Cadillac 1-2-3 at the front of the field. Cameron passed Barbosa for the lead just past the half-hour mark.

Behind Jani in fourth, Stephen Simpson was a solid fifth in the JDC-Miller Motorsports Oreca; Brendon Hartley and Ryan Dalziel ran sixth and eighth in the ESM-run Nissans, split by Jonathan Bomarito in the lead Mazda RT24-P.

Following the first round of pitstops, however, Hartley moved his Nissan ahead of Simpson and Dalziel passed Bomarito, while Taylor grabbed second from Barbosa at the end of the first hour.

Richard Westbrook had the #67 Ford running fourth ahead of Kevin Estre in the #912 Porsche 911 RSR. This pair were chased hard by defending Rolex 24 GTLM winner Oliver Gavin in the #4 Corvette and two more Ford GTs, those of Olivier Pla and Andy Priaulx.

Then, after 45 mins, both Estre and Gavin passed Westbrook, leaving Hand as the only Ford in the top five.

After 30mins, John Edwards’ #24 BMW M6 ground to a halt on the entry of pitlane and had to go behind the wall. There was a minor drama for the second Porsche, when Patrick Pilet picked up a right-front puncture and had to stop after 40mins.

This pair pitted together after 50mins, with Patrick Lindsey doing a fine job in third for Park Place Motorsports, ahead of the Michael Shank Racing Acura NSXs of Jeff Segal and Andy Lally.

An early casualty in GTD, bringing out the first full-course yellow, was the Change Racing Lamborghini Huracan of Jeroen Mul, which ran off the road and into the tire barrier.

Another Lamborghini was heavily delayed when the Dream Racing #27 Huracan ignited a fuel spill on pitlane.