Mantella Autosport will make its IMSA competition debut next month at Daytona International Speedway as the Toronto-based squad targets a strong run in the 2014 IMSA Continental Tire SportsCar Challenge. Anthony Mantella and Mark Wilkins will share the driving duties in the No. 8 Powered by Spyder/Gulf Aston Martin entry. 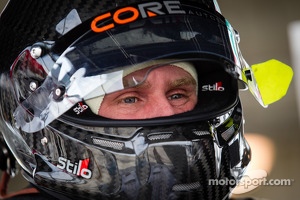 Building on an impressive debut season of IMSA competition, the shapely Aston Martin has proven to be as quick as it is good looking, netting seven pole positions in GS Class competition last season.

The campaign will mark Mantella’s rookie effort in the category as he steps up from IMSA Porsche GT3 Cup Challenge Canada competition. Moving up to the biggest racing stage he has competed on, the Toronto-based fitness enthusiast is focused on hitting his marks as he looks forward to learning a wide range of new tracks and racing against new competitors this year.

"My main goal is really just to establish a consistent learning curve,” said Mantella. “I know it's going to be a big step. It is a big challenge for somebody who has a limited racing background to jump in with the Pro-Am series at this level. My goal is just to keep on learning. The team has really helped me in my development. Between the coaching, the engineering and the mechanical staff that helps out, it really suits me and helps my development and that is really my only goal; to bring the car home to Mark (Wilkins) consistently."

Wilkins took third in his first-ever Rolex 24 At Daytona (2004, SGS Class) and brings his race-winning experience in Daytona Prototype competition to the effort as he helps Mantella build a racing organization for the long run.

“This is an exciting program for me to be a part of because Anthony is looking to me for help not just as his co-driver, but also for me to help outside of the car as well,” said Wilkins, who also resides in the Toronto area. “So this is a new experience for me, to be a part of establishing something new like this and building it up. It’s great to team with a fellow Canadian, to drive for a team that is based right here in Toronto, and it is an easy quick trip down to the shop!”

While bringing a lot of experience to the program, Wilkins-- who won his first ever Petit Le Mans event (LMPC, 2012)--will also be making his first-ever full-season Continental Tire SportsCar Challenge campaign.

“This series is just incredibly competitive and the talent level from both the teams and the drivers is amazing,” said Wilkins. “I am looking forward to racing the Aston Martin. We saw last year what it was capable of, and I think it will be a good platform for both Anthony and me with the balance that it has.”

The transition to a new series, a range of new tracks, and a new role as team owner is also seeing Mantella make another transition as he moves from the Porsche GT3 to the Aston Martin.

“Porsches have kind of become almost an extension of my body because I have been in them for two years, and even that isn't a very long time,” said Mantella. “So learning the Aston is going to be another new learning curve but I’m excited about it."

Wilkins and Mantella share a passion for finding speed, even when the temperatures drop.

“I met Mark (Wilkins) when he was coaching in the Porsche series,” said Mantella. “You learn differently from different coaches and something just clicked with me and Mark. Maybe it's because he is a snowmobiler, or maybe it's because we just hit it off, but whatever it is, the chemistry was right and he was a natural fit to be my co-driver and also my coach.”

With the team acquiring an Aston Martin over the off-season, a lot of preparation has gone into arriving at Daytona ready to go.

"We have done a complete refresh on the car from top to bottom,” said Mantella Autosport technical director Andrew Wojteczko. “We are working on familiarization with the car as well, so we are up to speed and when the car gets down there we know what to expect. I am excited that we’ve had the opportunity to hand pick the best of the best in putting this team together. Everybody you see on the team are guys with extensive experience that I trust fully with their roles so we have a lot of confidence about what we are capable of and really looking forward to the season.”

Szafnauer has "no intention of leaving" Aston Martin F1 team