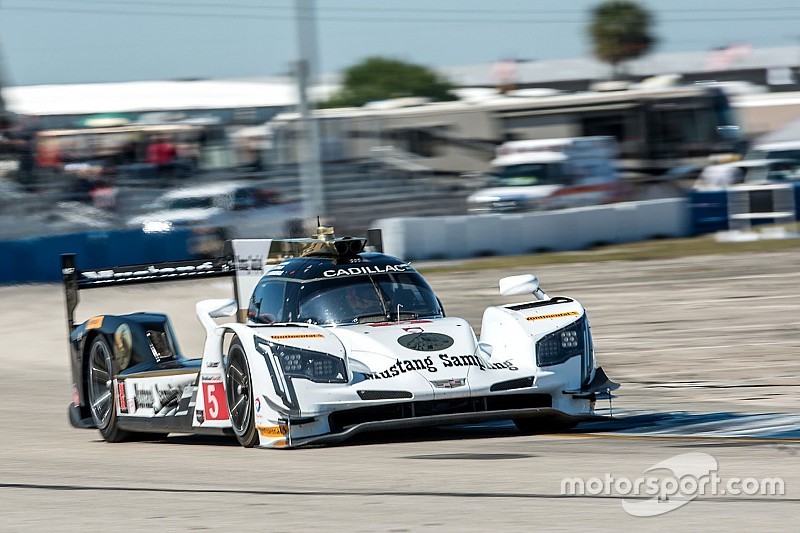 A challenge to the Cadillacs is brewing at Sebring, as five cars broke the 1min50sec barrier in the final practice session before qualifying and Christian Fittipaldi’s pacesetting Action Express Racing Cadillac had an edge of just 0.118sec.

It was Fittipaldi’s fulltime teammate Joao Barbosa who first threatened the 1min50sec mark, falling just 0.033sec short on his third lap, with Jonathan Bomarito’s #55 Mazda DPi-RT24P going second quick but then pulling in with a gearbox issue. Then Barbosa set a stunning 1min49.456sec, fastest lap of the weekend so far, with Marino Franchitti moving the #70 Mazda up into P2, albeit 1.1sec off top spot.

Brendon Hartley’s efforts in the #22 ESM Nissan-Ligier earned him P2 just 0.32sec behind Barbosa with his ninth lap, and Eric Curran in the #31 AXR Cadillac did a highly commendable job to get within half a second of Barbosa.

Then Porsche’s World Endurance champion Neel Jani shoved the Rebellion Oreca into top spot…. but his position barely lasted a minute, as Fittipaldi took over the #5 AXR Caddy to grab a 1min49.211sec lap.

Pipo Derani nailed a 1min49.5 to go fourth, a couple of tenths quicker than ESM teammate Hartley and then jumped up to third behind Jani with a 49.4. Derani had just set the fastest first sector of the weekend when the checkered flag flew and so he pitted, ultimate potential unrealized. Hartley’s best was still good enough for fifth, while the P6 and P7 cars – Renger Van der Zande’s Visit Florida Racing Riley Multimatic and Misha Goikhberg’s JDC-Miller Oreca – were also within a second of Fittipaldi’s best.

In GT Le Mans, the Porsche vs. Ford battle continued, and at the halfway point of the session, Dirk Werner sat at the top of the times in the #911 Porsche 911 RSR with a 1min56.931sec, chased by the three Ford GTs of Dirk Muller, Ryan Briscoe and Stefan Mucke.

However, Muller then moved to the top and then this two-marque fight was interrupted by a great lap from Nicky Catsburg in the #24 RLL BMW M6 which put him second fastest, a couple of tenths off Muller’s top spot. Kevin Estre grabbed third in the #912 Porsche to eclipse teammate Werner by just a tenth of a second, with Briscoe and Mucke completing the top six.

Tommy Milner and Giancarlo Fisichella, in the #4 Corvette C7.R and the #62 Risi Competizione Ferrari 488 respectively, were seventh and eighth, 0.7sec off the class leaders.

Michael Christensen’s Alegra Motorsports Porsche 911 GT3 R proved the Audis are beatable in the GT Daytona class, finishing the session a tenth-and-a-half ahead of Andrew Davis in the #57 Stevenson Motorsports R8 LMS, and two-tenths clear of Connor De Phillippi in the Land-Motorsport R8.

But as in GTLM, BMW showed pace, with Jens Klingmann taking fourth in the #96 Turner Motorsports BMW M6, as Mirko Bortolotti’s #11 Grasser Racing Team Lamborghini Huracan was fifth, half a second off Christensen’s best. Two Mercedes AMG GT3s were next up – Mario Farnbacher in the #33 Riley Motorsports-Team AMG entry and Tristan Vautier in the SunEnergy1 Racing car.

The Michael Shank Racing-run Acura NSXs were in the wars, however. The session was halted less than 10mins in when Mark Kvamme’s #20 PC car collided with Ozz Negri’s #86 Acura which sustained too much suspension damage to continue the session. Then, toward the end of the session, the #93 NSX was seen trailing damage down pitroad not long after Katherine Legge had been setting encouraging times, within a second of GTD top spot.

In Prototype Challenge, Gustavo Yacaman was again top for BAR1 Motorsports, a full second ahead of Pato O’Ward in the Performance Tech machine and 1.7sec up on Sean Rayhall’s best for Starworks.