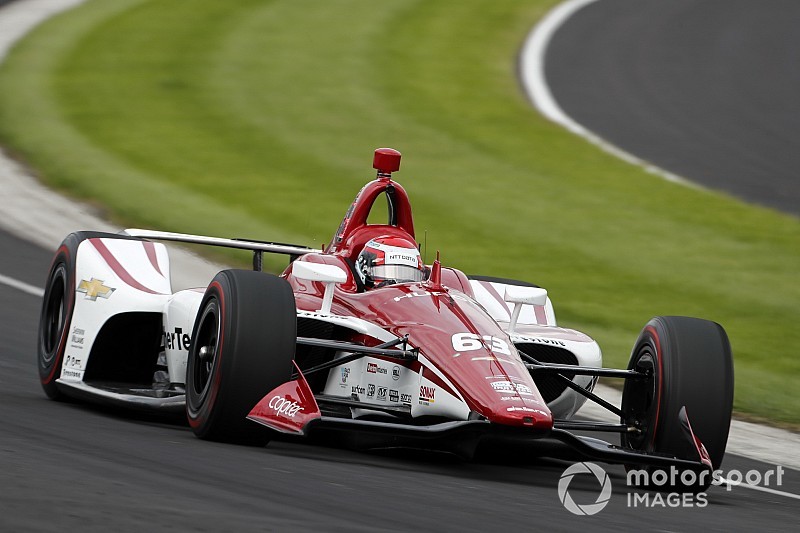 Ed Carpenter Racing Scuderia Corsa-Chevrolet driver Ed Jones topped the overall speeds and the no-tow speeds on the third day of testing for the 103rd Running of the Indy 500 presented by Gainbridge.

The planned seven hours of running was cut 90mins short by rain and thunderstorms, ensuring Jones’ eighth lap of 37, set this morning, remained fastest at 227.843mph. That was 1.5mph faster than the best lap of 2017 Indy winner Takuma Sato in the #30 Rahal Letterman Lanigan Racing-Honda, who beat Zach Veach’s Andretti Autosport-Honda by 0.6mph.

Sebastien Bourdais in the Dale Coyne Racing with Vasser-Sullivan-Honda was fourth fastest ahead of the fastest rookie, Harding Steinbrenner Racing’s Colton Herta.

Sage Karam was the busiest driver of the day in the Dreyer & Reinbold Racing-Chevrolet, turning 86 laps, and finished up just ahead of the continually impressive Juncos Racing-Chevy of Kyle Kaiser, which is still bearing no sponsor logos.

Spencer Pigot ensured two Carpenter cars in the Top 10, ahead of Scott Dixon’s Chip Ganassi Racing-Honda and the fastest of the Team Penske-Chevrolets, Simon Pagenaud in 10th.

Just ahead of Fast Friday, when the BorgWarner turbos are tweaked up to 1.4-bar boost in preparation for Saturday and Sunday qualifying runs, several drivers carried out qualifying simulations – low drag and without the aid of a draft from any other cars (IndyCar officially judges a car has a tow if it is within 10 seconds of the car in front – changed today from seven seconds).

In these speeds, too, Jones was fastest, clocking a 224.957, ahead of Pigot’s 224.887, Pagenaud’s 224.868, and Will Power’s 224.858. Next up were Charlie Kimball (Carlin), Marco Andretti (Andretti-Herta), Sato, Ed Carpenter, Josef Newgarden (Penske) and Arrow Schmidt Peterson Motorsport’s rookie Marcus Ericsson.

The only entry not to hit the track today was Fernando Alonso, whose McLaren Racing team is building up the John Cummiskey/Carlin-built car, following the F1 legend's shunt in the McLaren UK-built original.