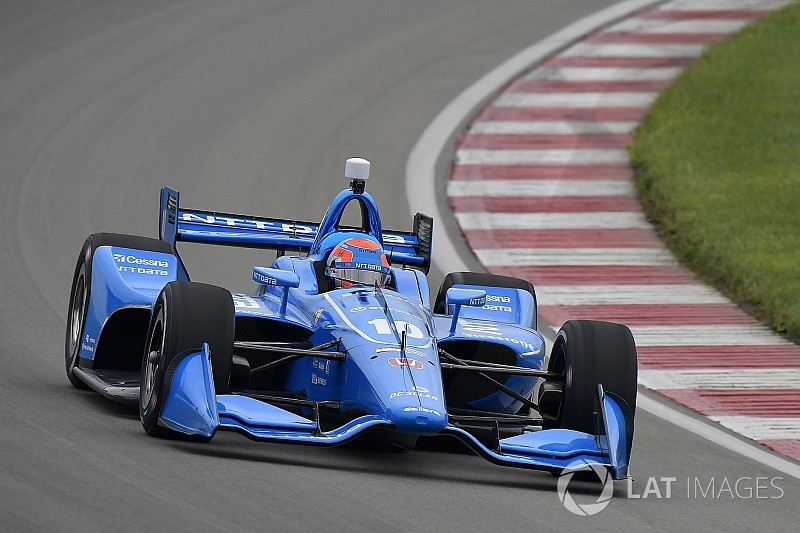 Ed Jones says he doesn’t know which IndyCar team he’ll race with in 2019, but insists he has not yet heard if he will lose his Chip Ganassi Racing ride to Felix Rosenqvist or any other driver.

Jones, who joined Ganassi from Dale Coyne Racing, has endured a difficult season that leaves him 12th in the championship, with two podium finishes – Long Beach and Detroit 2 – to his name.

Of the 14 races in which grid order was a result of qualifying speeds (as opposed to Gateway’s, based on championship position), Jones has outqualified star teammate and points leader Scott Dixon on four occasions.

Now there are rumors that 2015 European Formula 3 champion Rosenqvist will be – or already has – signed to drive Ganassi’s #10 car in 2019, having hugely impressed the team on the few occasions he’s tested for them, and having won three of the 10 Indy Lights races in which he competed in 2016.

However, Jones says he has not told by anyone within Ganassi about whether he will be retained for next season, but says he’s allowed to explore options.

“At the moment I’ve got no plans for next year,” he told Motorsport.com. “I’m not sure what’s going on, I’m a bit in the dark, just waiting to see what happens.

“But I’m figuring what options are out there, so I have a back-up in case things don’t happen again with Ganassi.”

The 2016 Indy Lights champion admitted it has been a tough second season in the series, but said there were extenuating circumstances on some occasions, and that there had been highlights.

“I think the team was struggling for pace in the early part of the year,” he observed, “and some of the teams have had the upper hand on us at that point.

“At Phoenix I was running second and I crashed, at Barber I had an engine failure, and I had three races where I’ve had punctures and lost a load of positions. So a lot of things that have gone wrong and it’s been frustrating.

“But there have been times where it’s gone well and I’ve been able to outqualify Scott or beat him in the race, which I never expected to do consistently this year, but at least I’ve been able to do it a couple of times.

"Obviously he’s doing well in the championship, but I also think he’s been fortunate at times. But that’s what comes with experience – knowing you’ve got to be there at the right place at the right time to have a crack at it. Unfortunately I haven’t been up there enough.

“But the Ganassi team has really worked hard to give me what I need to progress and I think I’ve been doing that. It takes time to fully gel with a new team, new people, and obviously we had the new car as well.

“So a tough season where I’ve performed well at certain points and although the results haven’t been what I’d like, the team know I can be up there.”

Jones, who was one of the stars at Gateway, climbing through to third place after pulling off some decisive passes, said he had also now coming to grips with the handling of the car on road and street courses with the 2018 aerokit.

“Yeah, I think we’ve been definitely getting there,” he replied. “Mid-Ohio was our last road course, and I outqualified Scott in Q1 and if the red flag hadn’t come out in Q2 [for a spin by James Hinchcliffe] I was only two corners away from being fastest in Q2 and into the Firestone Fast Six. We played the wrong strategy and I got another puncture, so we just got screwed over by bad luck there.”

Asked if he felt his stock had risen as a result of the 2018 season, compared with this time last year, Jones said: “Yeah, because I’ve shown I can beat Scott in the same team, and I don’t think any teammate has done that on a street course since Dario won the championship.

"It’s easy to say bad things, but I have had a lot of bad luck this season, although there have been things I could have done better too. But there have been points where I’ve been super-strong and I’ve showed what I can do.

“Of course IndyCar’s hard and so many things have to go right to have a good weekend. But I’m 23 and I’m only going to get better.”

Juncos to run two IndyCars in 2019

Munoz to sub for Wickens at SPM in Portland, Sonoma