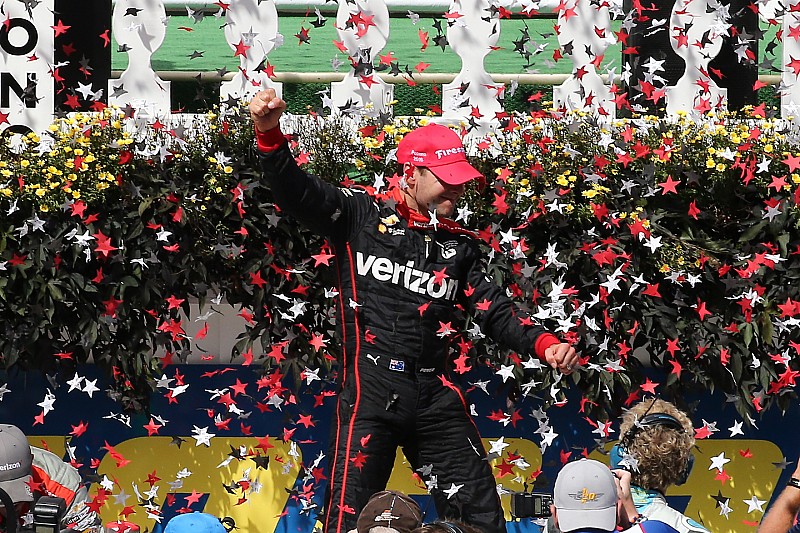 Will Power clinched his fourth win of the season, and slashed teammate Simon Pagenaud's points lead from 58 points to 20 as the Frenchman crashed out on cold tires when his car bottomed out at Turn 1.

Polesitter Mikhail Aleshin jumped into an immediate lead but it was too immediate, and the start was waved off.

The second start from the #7 Schmidt Peterson Motorsport Honda wasn’t much better but it was allowed to stand, but his lead lasted less than one lap before Newgarden took the lead, while further back, Marco Andretti moved up four places to grab ninth.

That became eighth when Takuma Sato spun out of third place and into the wall on the exit of Turn 3, bringing out the first yellow of the day. The AJ Foyt Racing driver emerged relatively unscathed and unaided. When the pits opened, Scott Dixon pitted the #9 Chip Ganassi Racing-Chevrolet with a puncture, while the Corvette Pace Car led the field down pitlane to avoid Sato’s debris.

The Lap 9 restart had Newgarden, Aleshin, Munoz, Hinchcliffe, Rossi, Castroneves, Kanaan as top 7, but Aleshin drafted past Newgarden on the front straight, only to lose the lead to the ECR driver down to Turn 3.

Aleshin retook the lead on Lap 11, but the top four remained covered by 1 sec, Carlos Munoz and Rossi holding down third and fourth.

Hunter-Reay got past Tony Kanaan in the #10 Ganassi entry on Lap 19.

The other man to watch at this stage, considering he restarted 21st and last, was Dixon who was 14th by Lap 17 and then got ahead of championship leader Simon Pagenaud’s Penske for 13th on lap 20. Pagenaud fell a further spot when Charlie Kimball demoted him.

Hunter-Reay’s charge continued when Hinchcliffe slammed the door on a passing attempt by Castroneves in Turn 3, and the #28 Andretti car drafted past the Penske car into Turn 1 and grabbed sixth.

At this stage, Rossi, Newgarden, Munoz and Hinchcliffe all seemed content to sit half a second behind the car in front, clocking 214mph laps, but Hunter-Reay kept pushing, and got ahead of Hinchliffe on Lap 28, and Munoz on Lap 30 before diving into the pits.

He was followed in a lap later by Aleshin, Munoz, Hinchcliffe, Andretti and the second Foyt car of Jack Hawksworth.

On Lap 33, Rossi, Kanaan and Newgarden also went into the pits, leaving Dixon briefly at the front, his early top-off having paid off. Power and Rahal also pitted on Lap 34, Pagenaud on Lap 35, Dixon on Lap 36.

Following the stops, Hunter Reay came out on the tail of erstwhile leader Aleshin and started hounding him, as Bourdais who had also stopped early, led for a lap before pitting.

Thus the Aleshin vs Hunter-Reay battle became the battle for the lead on Lap 38, chased by Newgarden, Munoz, Rossi, Hinchcliffe, Castroneves, Kanaan, Power and Andretti. However, Marco lost his 10th place to Pagenaud opn Lap 40, as the Frenchman was four seconds behind title rival Power.

RHR was advised by the pits to carry on in the draft of Aleshin, an order he followed assiduously as those behind adopted similar strategies, the top nine covered by less than six seconds.

The status quo was broken on Lap 47, when Castroneves moved ahead of Hinchcliffe for sixth and then again on Lap 49 as Hunter Reay took the lead from Aleshin, and Munoz and Rossi got ahead of Newgarden.

Further back, Andretti got back ahead of Pagenaud but was still 4.5secs behind Power.

On Lap 56, Aleshin hit 214 and repassed Hunter-Reay who also gave up second to teammate Munoz. Right behind, Newgarden passed Rossi for fourth, but teammate Carpenter cruised into the pits with apparent engine trouble.

On Lap 61, Aleshin, Munoz, and Hunter-Reay all pitted, and emerged with RHR having jumped his teammate to reclaim second.

Rossi passed Newgarden before they both pitted, along with Helio Castroneves. However, Rossi was sent out into the path into Kimball’s Ganassi machine, vaulting the #98 Andretti car into the air where it crashed down on the nose of Castroneves’ car. Rossi was out on the spot, as was Castroneves, while Kimball was able to get going, but one lap down.

At the restart, Montoya and Dixon passed Pagenaud, and when Andretti lost momentum to a late pass by Rahal, Power grabbed eighth, as Dixon then put Montoya behind him.

A few cars ahead, Kanaan had passed Hinchliffe for fifth, while Newgarden took Ryan Hunter-Reay for second, although the Andretti swiftly rectified. Meanwhile Montoya started falling back, and although he set his fastest lap on Lap 76, it was a 213.401, some two mph off those ahead.

By Lap 80, the top 10 had split in two, with Kanaan’s fifth placed Ganassi car running over one second ahead of Hinchcliffe in sixth. But the SPM car was also pulling away from Rahal who led the next group.

On lap 82, Dixon passed Power for eighth. With Castroneves out, and Power and Pagenaud behind him, this promised to be a reasonable day for the Ganassi driver in terms of boosting his distant championship hopes.

Bourdais moved past Andretti and into the top 10 on Lap 93, while a lap later Aleshin ducked into the pits from second place. A lap later Hunter-Reay. Munoz, Hinchcliffe, Rahal and Andretti also came in for fresh rubber and more fuel. By the time Hunter-Reay was back up to speed, Aleshin had passed him.

Newgarden pitted on Lap 96, leaving the Top 3 as Kanaan, Dixon and Power. TK hit the pits a lap later – although his was a disastrous stop as he ran out of fuel and  dropped to 14th - with Dixon and Power then following in consecutive laps.

That left Aleshin back in front ahead of Hunter-Reay, Newgarden, Munoz, Hinchcliffe, Dixon, Rahal, Power – then a gap of three seconds to Pagenaud, Montoya, Bourdais and Andretti to complete the top dozen.

That order changed by Lap 106, as Power took seventh from Rahal and quickly pulled away, Bourdais took Montoya for 11th and a thoroughly fired up Kanaan went into 12th.

By lap 110, Hinchcliffe, though still holding a strong fifth (1.6 ahead of Dixon) was double that margin adrift of fourth-placed Munoz. Some ten laps later, Aleshin and Hunter-Reay were two seconds clear of Newgarden.

Power passed Dixon and then Hinchcliffe in consecutive laps moving into fifth place by Lap 120 albeit some six seconds off the lead.

Aleshin pitted on Lap 121, and teammate Hinchcliffe followed him in a lap later, with Rahal also getting serviced. Hunter-Reay and Munoz pitted on Lap 123, but Aleshin again had his tires up to temperature and with a 217.203mph lap dived past Hunter-Reay.

Newgarden’s Lap 126 stop was followed two laps later by Power and Montoya, who’d found a new lease of speed in the previous stint. Pagenaud was classified as leader next time and thus gained a bonus point, but then immediately pitted.

On Lap 134, with all the leaders having stopped, the gaps had stretched between all cars except the front two, Aleshin and Hunter-Reay running just half a second behind. Newgarden was 1.4sec back, Power in fourth a further 2sec om arrears, with Munoz a full 4sec down, chased by Dixon Pagenaud, Kanaan, Montoya, Bourdais, Rahal and Hinchcliffe.

Kanaan moved past Pagenaud for seventh on Lap 136, and Montoya and Bourdais soon followed suit. Up front, Hunter-Reay pulled away, and Newgarden and Power started closing in on Aleshin. Newgarden took second from the SPM car on Lap 141, and Power further deposed the Russian next time by.

Power stopped from the lead on Lap 157 and emerged ahead of Hunter-Reay, and as Bourdais pitted, that left the #12 Penske at the front, chased by #28.

Suddenly the drama mounted as championship leader Pagenaud smacked the wall on the exit of Turn 1, having bottomed out and slid high.

Lap 163 restart saw Hunter-Reay draft past Power for the lead when suddenly the #28 car lost power, cruised down pitlane and had to reboot his electrics, rejoining a lap down having not needed to stop at his pitbox.

Newgarden moved past Aleshin into second, as Kanaan and then Munoz passed Dixon to take fourth and and fifth respectively.

Behind Dixon, Bourdais ran seventh ahead of Montoya, Hinchcliffe and Rahal.

Power gained a new rival on Lap 171, as Aleshin passed Newgarden for second, and the lead pair then set about thrashing out 217mph laps.

Then the yellows flew on lap 176 as debris – the winglet off the left-rear wheelpod of Kanaan’s car – was spotted at the bottom of Turn 1.

The pits opened on Lap 177 for the crucial final stops, and Power’s appeared flawless as he re-emerged in the lead. His closest pursuer was now KVSH Racing’s Bourdais, who unusually chose not to take tires, and was followed by Newgarden, Kanaan, Alehsin, Dixon, Montoya, Munoz, Hinchclioffe.

At the lap 180 restart , Kanaan vaulted straight from fourth into second by Turn 1, yet both Newgarden and Aleshin repassed him at the end of the lap.

Hunter-Reay, who had got back on the lead lap thanks to the yellow, restarted in 12th and yet was passing Hinchcliffe for ninth on Lap 182.

Up at the front Aleshin passed Newgarden on Lap 183, while Bourdais continued to battle with Kanaan for fourth, and Montoya tried to hold off Hunter-Reay.

The battle between the Colombian and the America was so tough that Dixon managed to swoop past the pair of them to grab sixth. Just ahead, Bourdais, passed Kanaan who then started falling back behind Dixon and Hunter-Reay.

RHR passed Dixon for fifth on Lap 190, as Aleshin inched up on Power, the pair of them 2.5sec clear of Newgarden and Bourdais with 10 laps to go.

The irrepressible Hunter-Reay passed Bourdais for fourth on Lap 194, and started trying to close the 1.2sec gap to Newgarden, something he set about doing with relish and after some stumbles, completed the job on the penultimate lap.

Up front, Power completed the 200 laps 1.15sec ahead of Aleshin, with Hunter-Reay just 4.7sec behind, followed by Newgarden and Bourdais.

Dixon was sixth ahead of Munoz, Montoya, Kanaan and Hinchcliffe.

Power's 29th career win – which draws him level with Castroneves and Rick Mears in the all-time list – drew him to 20 points behind Pagenaud, 477-497.

Castroneves: “All of a sudden there was a car on top of me”