IndyCar rookie Felix Rosenqvist says his third-place grid position for the Firestone Grand Prix of St. Petersburg felt like “a gift” following his lucky graduation to the Fast Six.

The Swedish driver eventually outqualified five-time champion Dixon by 0.166sec and was within a quarter-second of St. Pete polesitter Will Power.

However, the debutant only made it to the Firestone Fast Six as a result of another super-fast rookie Colton Herta losing his two fastest laps for holding up another competitor. As a result, Rosenqvist was far from ebullient about his performance.

Asked if he was close enough to P1 to feel he could contend for poles and wins this year, Rosenqvist said: “That’s definitely the target. I expect myself to be there at some point.

“But today it felt more like a gift to be up here, than my actual performance. I would say we belong a bit further down the list – there and thereabouts, but with stuff definitely to work on.

“It seems to be the thing in this series that you need to go fast and hang on and if you’re lucky you’re going to have a good result. It seems to be that way even in the race. It’s a [case of] ‘never give up,’ I guess.”

In contrast to Dixon, Rosenqvist said he felt his car was good and that the improvements needed to come from himself.

“I wasn’t that unhappy,” he said. “I felt I had a lot in the driving to go through first, before I wanted to make changes. It was my first quali session as well, so I didn’t really have the confidence to change a bunch of stuff.

“Yes, there’s stuff we can improve but I was probably happier with the car than Scott.”

Rosenqvist, who has proven himself highly accomplished on street courses in Formula 3 (Macau GP winner) and in Formula E, described St. Petersburg as “definitely a fun circuit.”

He went on: “It has a good flow and I think everyone loves to come here.

“I have not had an easy time, I’ve had to work hard. It’s not like everyone is here by default. I had to work a lot on my driving, and I was probably worse off than I expected in the beginning.

“So it’s not like I would say I was some kind of street circuit master around here… Maybe next year!”

‘Not fun’ for Dixon

Despite his deficit to his teammate, Dixon still grabbed a second row slot, after a session in which the team made several mechanical changes to the #9 car.

The reigning IndyCar champion only narrowly squeezed into the Top 12, after spinning at Turn 8 on one of his hot laps in Q1 Group 2.

His second flyer wasn’t good enough for him to advance but Takuma Sato of Rahal Letterman Lanigan Racing-Honda caused a yellow flag by using an escape road, thereby causing another competitor to slow on his flyer.

Once Sato’s fastest time had been deleted as per the rule, he fell out of the top six in the group, allowing Dixon into the advancing sextet.

However, his car still looked wayward, and he did exceptionally well to reach the Firestone Fast Six and outqualify the Andretti Autosport cars of Ryan Hunter-Reay and Alexander Rossi.

Dixon said he was still not happy with the handling despite the large number of changes the team had made.

“I think it’s still far from OK,” said Dixon afterward. “We kept going in a circle, just really struggling to piece the corner together.

“Loads of understeer at apexes, just really chasing it on, so we’ll have to think about a lot of stuff for tomorrow. The car’s OK, it’s in the window, but it’s just not fun to drive.” 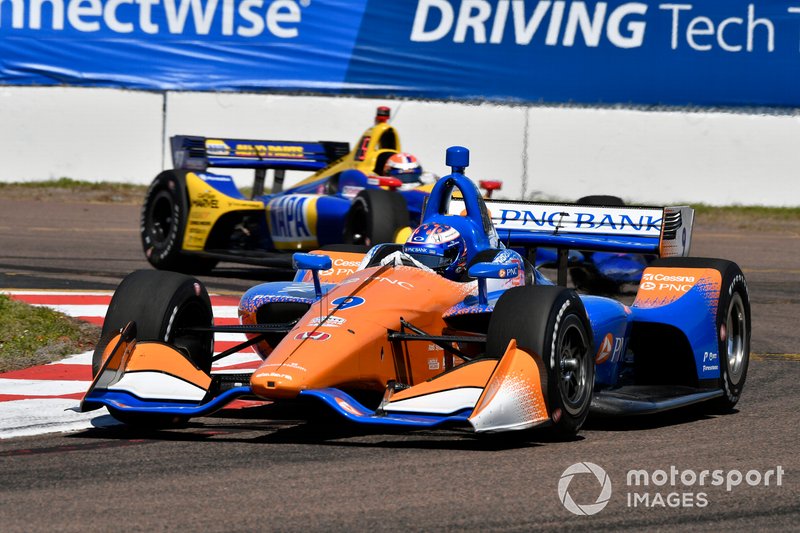