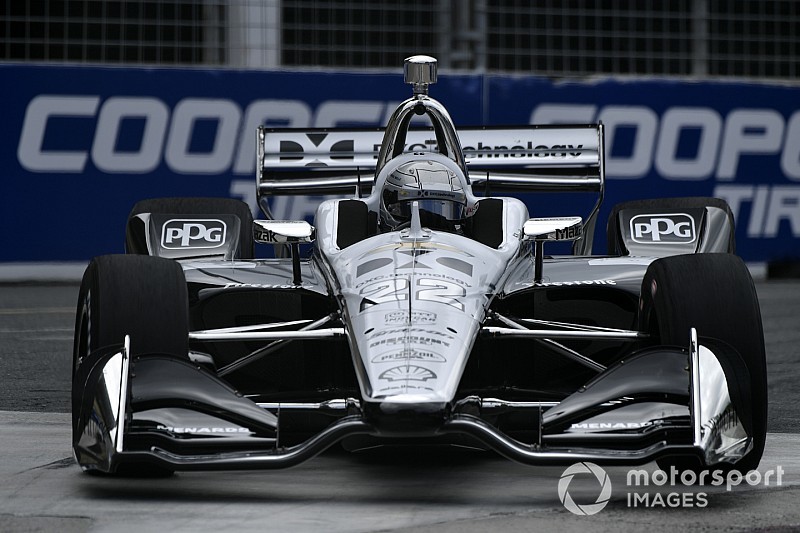 There were another couple of red flags for experienced drivers causing session-stopping errors in FP3 at the Honda Indy Toronto, but Team Penske-Chevrolet’s Simon Pagenaud was again unbeatable and three rookies excelled.

The 2016 NTT IndyCar Series champion and reigning Indy 500 winner lapped the 1.786-mile course in 59.365sec to beat his struggling teammates Josef Newgarden and Will Power by almost three-quarters of a second, while Felix Rosenqvist of Chip Ganassi Racing-Honda was second, a similar margin ahead of his teammate Scott Dixon, down in 15th.

Andretti Autosport-Honda’s Ryan Hunter-Reay had drawn to within 0.16sec of Simon Pagenaud’s top time when he thumped the tires and stalled at Turn 8, although he would remain third fastest.

With four minutes to go Graham Rahal stuffed his Rahal Letterman Lanigan Racing-Honda into the Turn 1 tire wall, allowing drivers just one more timed lap before the checkered flag, but no one improved.

Marco Andretti continued his reasonably impressive weekend in sixth ahead of championship-contending teammate Alexander Rossi, while Sebastien Bourdais made it two Coyne cars in the top eight.

James Hinchcliffe was just two places ahead of his Arrow Schmidt Peterson Motorsports-Honda teammate Marcus Ericsson who was in much better form today than yesterday, the pair of them split by Spencer Pigot’s Ed Carpenter Racing-Chevy.

Sage Karam, making his return to a non-oval IndyCar race for the first time since 2015, was 2sec off the pace, 1.1sec behind Carlin-Chevy teammate Max Chilton.