Audi ready to fight at 6 Hours of Silverstone 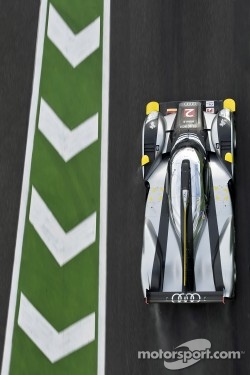 The 6-hour race at Silverstone (Great Britain) marks the beginning of the final sprint for Audi in the Intercontinental Le Mans Cup (ILMC) - the racing series that will become the FIA World Endurance Championship in 2012.

Only one week after the DTM round at Brands Hatch the Audi sports car prototype squad is traveling to the United Kingdom: The fifth of seven ILMC rounds in 2011 is on the calendar at the Grand Prix circuit in Silverstone. Audi Sport Team Joest is again fielding two vehicles of the Le Mans winning Audi R18 TDI featuring ultra-lightweight technology that will be driven by Timo Bernhard and Marcel Fässler (car number "1") and Tom Kristensen and Allan McNish (car number "2").

Audi has fond memories of Silverstone. In 2008 Audi Sport Team Joest triumphed at the last European run of the Audi R10 TDI, winning the champion’s title in the LMS in the process. At the ILMC’s debut last year two Audi R15 TDI cars were on the front row of the grid.

Given that the most recent event, the 6-hour race at Imola, did not go according to plans for Audi Sport Team Joest, with Bernhard/Fässler and Kristensen/McNish taking third and fourth place, there is only one aim for Silverstone: victory.

Since the event at Imola further work on fine-tuning the setup of the Audi R18 TDI has been done in track tests. In addition, it should be easier for the sports prototype powered by an innovative V6 TDI engine to bring its strengths to bear on the British Grand Prix circuit.

With respect to its driver line-up Audi is optimally set for Silverstone. Allan McNish has already won the race three times (in 2004, 2005 and 2008), took the pole position last year and regards Silverstone as his home track. Le Mans record winner Tom Kristensen won there in Formula 3000 and in the British Touring Car Championship (BTCC). Timo Bernhard and Marcel Fässler, who have been forming a driver pairing since Imola, have been on the podium at Silverstone as well.

The Silverstone 6 Hours will start on Sunday, September 11, at 11:35 a.m., local time. Audi.tv will air a full-length broadcast of the race live on the internet at microsites.audi.com/lemans/.

Topics of the weekend

- Will Audi be stronger than Peugeot at Silverstone?
- Who will prevail in the team-internal duel?
- Can Audi keep the title fight in the manufacturers’ classification open?
- Will Audi Sport Team Joest take the lead in the team standings?Quotes by the officials

Dr. Wolfgang Ullrich (Head of Audi Motorsport): "The Intercontinental Le Mans Cup is now in the decisive half of the season. After the disappointing result at Imola we want to be at the very front again at Silverstone. By winning Le Mans we showed the performances that are possible with the R18 TDI. Silverstone should be a race track on which we can convert this potential into a good result."

Ralf Jüttner (Technical Director Audi Sport Team Joest): "We’re running at the ‘home of British motor racing’ at the traditional Silverstone circuit. This is also Allan McNish’s home race. The event is always well attended. Silverstone is a tradition-steeped race track even though it has changed. But many key places like Becketts or Maggotts have remained unchanged and these are world famous corners just like Eau Rouge at Spa. The drivers are looking forward to them. In the championship, unfortunately, things are not looking so good for us. But we want to take revenge for Imola and win. We’re competing with the same driver pairings as we did at Imola. Tom and Allan know each other really well and Timo and Marcel have gelled with each other too. I’m sure it’ll be a nice race."

Facts and quotes by the Audi drivers

Timo Bernhard (30/D), Audi R18 TDI #1 (Audi Sport Team Joest) - Finished in the Audi R15 TDI at Silverstone in third place last year
- Together with Marcel Fässler last mounted the podium for Audi at Imola
"We’re running on a tradition-steeped circuit with a proud sports car history. There are slow, medium fast and some nice fast corners. I really like this circuit so I’m especially eager to go there. The fast Maggotts and Copse sections are particularly exciting to drive in a sports car like the Audi R18 TDI because you reach speeds of over 200 km/h there. That’s huge fun, but also a big challenge. As the circuit is a bit longer than Imola driving in traffic should be a little easier. After the pole position at Spa, our leading position during parts of the race at Le Mans and our initially promising place at Imola it’s time for victory now."

Marcel Fässler (35/CH), Audi R18 TDI #1 (Audi Sport Team Joest)
- Is not familiar with the current layout of the Silverstone circuit yet
- Took second place in the 2009 LMS at Silverstone
"I last raced at Silverstone in 2009 so I don’t know the new track layout yet. I’m particularly looking forward to the fast combinations of corners: Becketts and Hangar will no doubt be huge fun in the Audi R18 TDI. As the track is wider we’ll have more opportunities for overtaking than we last did at Imola. There are several long straights which make lapping easier because our own speed is clearly higher. We should never forget the weather. There’s always a possibility for rain at Silverstone. I’ve really gelled well with my new team-mate Timo Bernhard. We both know what counts and have no problem agreeing on a common vehicle set-up. After taking third place at the last event, I’d like to move forward a bit more now."

Tom Kristensen (44/DK), Audi R18 TDI #2 (Audi Sport Team Joest)
- Has celebrated as many as 20 sports car victories with Audi
"Finally I’m back in an Audi R18 TDI after a long summer break! We were struck by misfortune last year and I didn’t even get to drive at Silverstone. Now we want to show that we’re in contention for victory. Traveling to the UK is like returning to the roots of motorsport. And the fans are particularly enthusiastic there. In addition, many Brits are great sports car fans. I’m sure they were pleased to hear this summer that there will be a world champion’s title for sports cars next year. The circuit has been changed significantly in the course of the years. There are many nice corners even though my favorite one, Bridge, is unfortunately no longer used. But with respect to safety, the run-off areas and the view for the spectators the operators have done a really great job."

Allan McNish (41/GB), Audi R18 TDI #2 (Audi Sport Team Joest)
- Has won there twice in the Audi R8 and once in the R10 TDI
- Started from the pole position last year in the Audi R15 TDI
"Naturally we want to score many points for the Intercontinental Le Mans Cup at Silverstone. The battle between Audi and Peugeot has always been very close. Sometimes our rivals were better in qualifying and we won the race and sometimes it was the other way around. I’m sure that Silverstone will again be a classic. We already raced on the new circuit last year but this year we’re using different pit facilities. There are two crucial places on the circuit, a very fast and a slow one: the high-speed sections Copse and Becketts down toward Stowe. Becketts is arguably one of the nicest spots for the fans. And there’s Club Corner and the new infield section which are very slow and demand a totally different driving style and a different set-up."

6 Hours of Silverstone next stop for Le Mans Series

ILMC heads to UK for 6 Hours of Silverstone